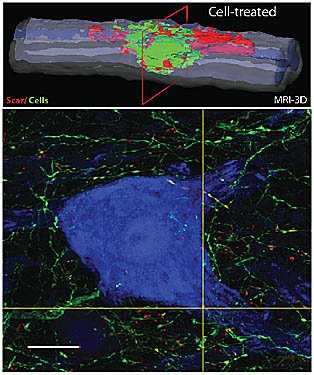 An international team led by researchers at the University of California, San Diego School of Medicine reports that a single injection of human neural stem cells produced neuronal regeneration and improvement of function and mobility in rats impaired by an acute spinal cord injury (SCI).

The findings are published in the May 28, 2013 online issue of Stem Cell Research & Therapy.

Martin Marsala, MD, professor in the Department of Anesthesiology, with colleagues at UC San Diego and in Slovakia, the Czech Republic and The Netherlands, said grafting neural stem cells derived from a human fetal spinal cord to the rats’ spinal injury site produced an array of therapeutic benefits – from less muscle spasticity to new connections between the injected stem cells and surviving host neurons.

“The primary benefits were improvement in the positioning and control of paws during walking tests and suppression of muscle spasticity,” said Marsala, a specialist in spinal cord trauma and spinal injury-related disorders. Spasticity – exaggerated muscle tone or uncontrolled spasms – is a serious and common complication of traumatic injury to the spinal cord.

The human stem cells, said the scientists, appeared to vigorously take root at the injury site.

“In all cell-grafted animals, there was robust engraftment, and neuronal maturation of grafted human neurons was noted,” Marsala said. “Importantly, cysts or cavities that can form in or around spinal injuries were not present in any cell-treated animal. The injury-caused cavity was completely filled by grafted cells.”

The rats received the pure stem cell grafts three days after injury (no other supporting materials were used) and were given drugs to suppress an immune response to the foreign stem cells. Marsala said grafting at any time after the injury appears likely to work in terms of blocking the formation of spinal injury cavities, but that more work would be required to determine how timing affects functional neurological benefit.

The grafted stem cells, according to Marsala, appear to be doing two things: stimulating host neuron regeneration and partially replacing the function of lost neurons.

“Grafted spinal stem cells are rich source of different growth factors which can have a neuroprotective effect and can promote sprouting of nerve fibers of the host neurons. We have also demonstrated that grafted neurons can develop contacts with the host neurons and, to some extent, restore the connectivity between centers, above and below the injury, which are involved in motor and sensory processing.”

The scientists used a line of human embryonic stem cells recently approved for Phase 1 human trials in patients with chronic traumatic spinal injuries. Marsala said the ultimate goal is to develop neural precursor cells (capable of becoming any of the three main cell types in the nervous system) from induced pluripotent stem cells derived from patients, which would likely eliminate the need for immunosuppression treatment.

Pending approval by UC San Diego’s Institutional Review Board, the next step is a small phase 1 trial to test safety and efficacy with patients who have suffered a thoracic spinal cord injury (between vertebrae T2-T12) one to two years earlier, and who have no motor or sensory function at or below the spinal injury site.

“This is exciting, especially because, historically, there has been very little to offer patients with acute spinal cord injury,” said study co-author Joseph Ciacci, MD, professor of surgery and program director of the Neurosurgery Residency at the UC San Diego School of Medicine. Ciacci, who is also chief of neurosurgery for the Veterans Affairs San Diego Healthcare System, will oversee the clinical trial at UC San Diego and the VA.

Ciacci said if the initial study confirms safety and efficacy, as well as the viability of the implanted cells, neural regeneration and decreased spasticity, the protocol can be expanded to other patients with other forms of severe spinal cord injury.

Notes about this neuroregeneration and spinal injury research

Funding came, in part, from the California Institute for Regenerative Medicine (RM1-01720) and Neuralstem Inc., which also provided cells.