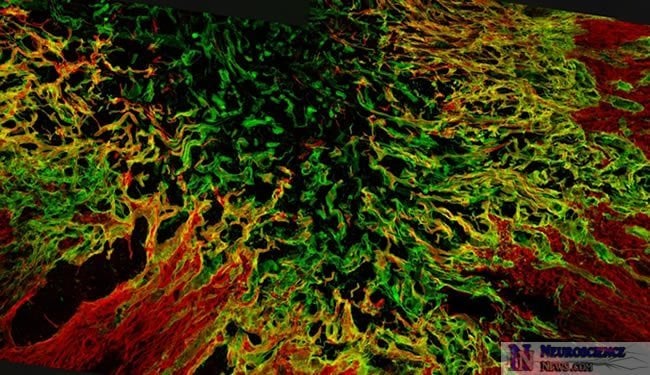 Researchers have discovered that a cancer drug, Taxol, can reduce deterioration of the cytoskeleton and scar tissue following spinal cord injuries in rats.

A weakened cytoskeleton and impenetrable walls of scar tissue are considered by many to be the main obstacles of regeneration of nerve cells in the spinal cord.

It is believed Taxol stabilized microtubules and reduced scar tissue enough to allow the new growing neurons to pass through the injured sites to make useful connections.

These experiments included pumping Taxol directly into the injured sites shortly after the spinal cord injury in rats. Further tests will look at the effects of applying Taxol to much older injuries with more established scar tissue.

Since Taxol is already approved for cancer treatment, there already exists data that could help this research move along more rapidly than is usually the case with a new potential drug.

This research should be helpful to those associated with spinal cord injuries, synaptic plasticity, neuroregeneration research, neurodegenerative disorders and neurology research. More details are provided in the release below.

After a spinal cord injury a number of factors impede the regeneration of nerve cells. Two of the most important of these factors are the destabilization of the cytoskeleton and the development of scar tissue. While the former prevents regrowth of cells, the latter creates a barrier for severed nerve cells. Scientists of the Max Planck Institute of Neurobiology in Martinsried and their colleagues from the Kennedy Krieger Institute and University of Miami in the United States, and the University of Utrecht in the Netherlands, have now shown that the cancer drug Taxol reduces both regeneration obstacles. Science, January 27, 2011.

Paraplegia. This is often the long-lasting result, when nerve fibers have been crushed or cut in the spinal cord. In contrast, for example, to the nerves in a cut finger, the injured nerve cells in the central nervous system (CNS) won’t regrow. Scientists have been working for decades to discover the reasons for this discrepancy in the regeneration abilities of nerve cells. They have found a variety of factors that prevent the regeneration of CNS nerve cells. One by one a number of substances that act like stop signs and halt the resumption of growth have been discovered. Other obstacles lie within the cells: The microtubules, small protein tubes which compose the cells’ cytoskeleton, are completely jumbled in an injured CNS nerve cell. A structured growth becomes impossible. In addition to this, the lost tissue is progressively replaced by scar tissue creating a barrier for growing nerve cells.

Frank Bradke and his team at the Max Planck Institute of Neurobiology in Martinsried study the mechanisms inside CNS nerve cells responsible for stopping their growth: “We try to provoke the cells to ignore the stop signs so that they regrow.” For this task, the neurobiologists have focused on studying the role of microtubules. These protein tubes have a parallel arrangement in the tip of growing nerve cells, stabilizing cells and actively pushing the cell end forward. This arrangement is lost in injured CNS cells. So how can the order of the microtubule be kept or regained in these cells? And once the cells start growing, how can they overcome the barrier of the scar tissue? Together with their colleagues from the United States and the Netherlands, the Max Planck scientists have now found a common solution for both problems.

New application for an established drug

Taxol, the trade name of a drug currently used for cancer treatment, has now been shown to promote regeneration of injured CNS-nerve cells. The scientists report in the online issue of the journal Science that Taxol promotes regeneration of injured CNS-nerve cells in two ways: Taxol stabilizes the microtubules so that their order is maintained and the injured nerve cells regain their ability to grow. In addition, Taxol prevents the production of an inhibitory substance in the scar tissue. The scar tissue, though reduced by Taxol, will still develop at the site of injury and can thus carry out its protective function. Yet growing nerve cells are now better able to cross this barrier. “This is literally a small breakthrough”, says Bradke.

Experiments in rats performed by this group verified the effects of Taxol. These researchers supplied the injury site after a partial spinal cord lesion with Taxol via a miniature pump. After just a few weeks, animals showed a significant improvement in their movements. “So far we tested the effects of Taxol immediately after a lesion”, explains Farida Hellal, the first author of the study. “The next step is to investigate whether Taxol is as effective when applied onto an existing scar several months after the injury.”

The fact that a clinically approved drug shows these effects has a number of advantages. Much is already known about its interactions with the human body. In addition, Taxol can be applied directly at the site of injury for the treatment of spinal cord injuries and the amount needed is far less than what is used in cancer therapy. This should reduce side effects. “We are still in the state of basic research and a variety of obstacles remain – and eventually, pre-clinical trials will need to be done “, cautions Bradke. “However, I believe that we are on a very promising path.”