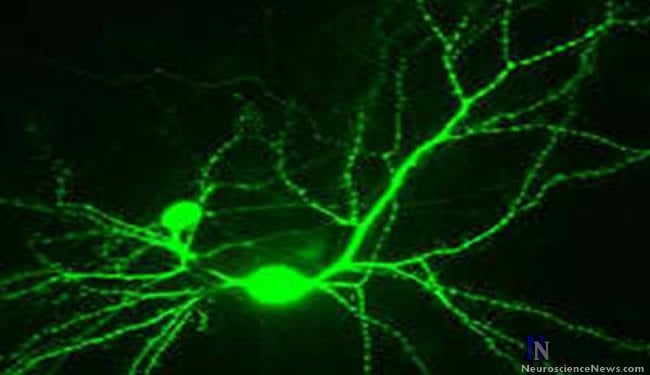 A modified form of the enzyme Cdk5 is elevated in the brains of Alzheimer’s disease patients, where it triggers damage to nerve cell connections.

Alzheimer’s disease is characterized by abnormal proteins that stick together in little globs, disrupting cognitive function (thinking, learning, and memory). These sticky proteins are mostly made up of beta-amyloid peptide. A better understanding of these proteins, how they form, and how they affect brain function will no doubt improve the diagnosis and treatment of Alzheimer’s disease. To this end, a research team led by Stuart A. Lipton, M.D., Ph.D. at Sanford-Burnham Medical Research Institute (Sanford-Burnham) found that beta-amyloid-induced destruction of synapses—the connections that mediate communication between nerve cells—is driven by a chemical modification to an enzyme called Cdk5. The team found that this altered form of Cdk5 (SNO-Cdk5) was prevalent in human Alzheimer’s disease brains, but not in normal brains. These results, published online the week of August 15 in the Proceedings of the National Academy of Sciences of the USA, suggest that SNO-Cdk5 could be targeted for the development of new Alzheimer’s disease therapies.

Cdk5 is an enzyme known to play a role in normal neuronal survival and migration. In this study, Dr. Lipton and colleagues found that beta-amyloid peptides, the hallmark of Alzheimer’s disease, trigger Cdk5 modification by a chemical process called S-nitrosylation. In this reaction, nitric oxide (NO) is attached to the enzyme, producing SNO-Cdk5 and disrupting its normal activity.

“After NO is attached to Cdk5, it then jumps like a ‘hot potato’ to another protein called Drp1, disrupting its function and fragmenting mitochondria, the energy powerhouse of nerve cells. When the mitochondria are damaged, the synapses, which normally require a lot of energy for their function, are destroyed. This scenario disrupts communication between nerve cells, and thus memory and cognitive ability in Alzheimer’s disease,” said Dr. Lipton, professor and director of Sanford-Burnham’s Del E. Webb Neuroscience, Aging and Stem Cell Research Center. Dr. Lipton is also a neurologist who sees Alzheimer’s disease patients in his own clinical practice, and is credited with characterizing and developing memantine (Namenda®), the latest FDA-approved drug for Alzheimer’s disease.

In the current study, Cdk5 is shown to perform a new function not previously known—the ability to transfer NO from one protein to another. Until now, Cdk5 was only known to influence the function of other proteins by tagging them with phosphate groups in a process known as phosphorylation. The new study shows that the addition of NO sends Cdk5 into overdrive and allows it to also S-nitrosylate other proteins, in this case Drp1 on mitochondria. Most notably, the transfer of NO from SNO-Cdk5 to Drp1 triggers the loss of synapses, the part of a nerve cell that transmits electrochemical signals to other nerve cells. Loss of synapses is known to correlate with the degree of cognitive decline in Alzheimer’s disease.

The Role Empathy May Play in Music

As many as 5.3 million Americans are living with Alzheimer’s, currently the seventh-leading cause of death in the United States. This study was funded by the National Institutes of Health (NIH). Co-authors include Jing Qu, Tomohiro Nakamura, Gang Cao, Emily A. Holland, Scott R. McKercher, and Stuart A. Lipton, all located at Sanford-Burnham in La Jolla, Calif.

Notes about this Alzheimer’s research article