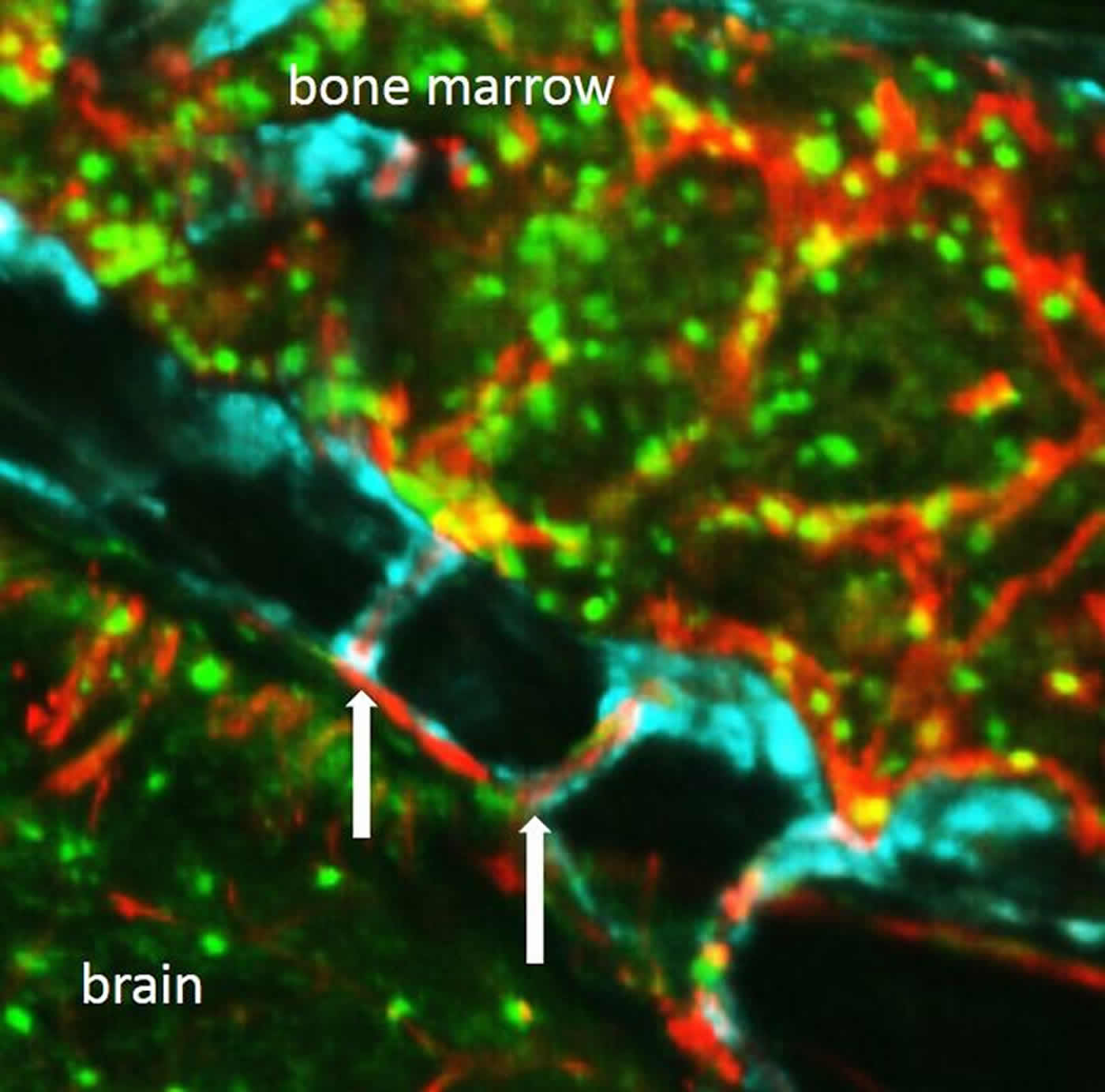 Newly discovered channels in the skull may provide a shortcut for immune cells going to damaged tissue. NeuroscienceNews.com image is credited to Nahrendorf Lab.

Unearthing Secret Tunnels Between the Skull and Brain

Summary: A new study sheds light on how immune cells may rush through channels to quickly get to injured brain tissue. Researchers say bone marrow in the skull is more likely to help supply neutrophils to the brain following a stroke.

Bone marrow, the spongy tissue inside most of our bones, produces red blood cells as well as immune cells that help fight off infections and heal injuries. According to a new study of mice and humans, tiny tunnels run from skull bone marrow to the lining of the brain and may provide a direct route for immune cells responding to injuries caused by stroke and other brain disorders. The study was funded in part by the National Institutes of Health and published in Nature Neuroscience.

“We always thought that immune cells from our arms and legs traveled via blood to damaged brain tissue. These findings suggest that immune cells may instead be taking a shortcut to rapidly arrive at areas of inflammation,” said Francesca Bosetti, Ph.D., program director at the NIH’s National Institute of Neurological Disorders and Stroke (NINDS), which provided funding for the study. “Inflammation plays a critical role in many brain disorders and it is possible that the newly described channels may be important in a number of conditions. The discovery of these channels opens up many new avenues of research.”

Using state-of-the-art tools and cell-specific dyes in mice, Matthias Nahrendorf, M.D., Ph.D., professor at Harvard Medical School and Massachusetts General Hospital in Boston, and his colleagues were able to distinguish whether immune cells traveling to brain tissue damaged by stroke or meningitis, came from bone marrow in the skull or the tibia, a large legbone. In this study, the researchers focused on neutrophils, a particular type of immune cell, which are among the first to arrive at an injury site.

Dr. Nahrendorf’s group also observed that six hours after stroke, there were fewer neutrophils in the skull bone marrow than in the tibia bone marrow, suggesting that the skull marrow released many more cells to the injury site. These findings indicate that bone marrow throughout the body does not uniformly contribute immune cells to help injured or infected tissue and suggests that the injured brain and skull bone marrow may “communicate” in some way that results in a direct response from adjacent leukocytes.

Dr. Nahrendorf’s team found that differences in bone marrow activity during inflammation may be determined by stromal cell-derived factor-1 (SDF-1), a molecule that keeps immune cells in the bone marrow. When levels of SDF-1 decrease, neutrophils are released from marrow. The researchers observed levels of SDF-1 decreasing six hours after stroke, but only in the skull marrow, and not in the tibia. The results suggest that the decrease in levels of SDF-1 may be a response to local tissue damage and alert and mobilize only the bone marrow that is closest to the site of inflammation.

Next, Dr. Nahrendorf and his colleagues wanted to see how the neutrophils were arriving at the injured tissue.

“We started examining the skull very carefully, looking at it from all angles, trying to figure out how neutrophils are getting to the brain,” said Dr. Nahrendorf. “Unexpectedly, we discovered tiny channels that connected the marrow directly with the outer lining of the brain.”

Future research will seek to identify the other types of cells that travel through the newly discovered tunnels and the role these structures play in health and disease.

Innate immune cells recruited to inflammatory sites have short life spans and originate from the marrow, which is distributed throughout the long and flat bones. While bone marrow production and release of leukocyte increases after stroke, it is currently unknown whether its activity rises homogeneously throughout the entire hematopoietic system. To address this question, we employed spectrally resolved in vivo cell labeling in the murine skull and tibia. We show that in murine models of stroke and aseptic meningitis, skull bone marrow-derived neutrophils are more likely to migrate to the adjacent brain tissue than cells that reside in the tibia. Confocal microscopy of the skull–dura interface revealed myeloid cell migration through microscopic vascular channels crossing the inner skull cortex. These observations point to a direct local interaction between the brain and the skull bone marrow through the meninges.