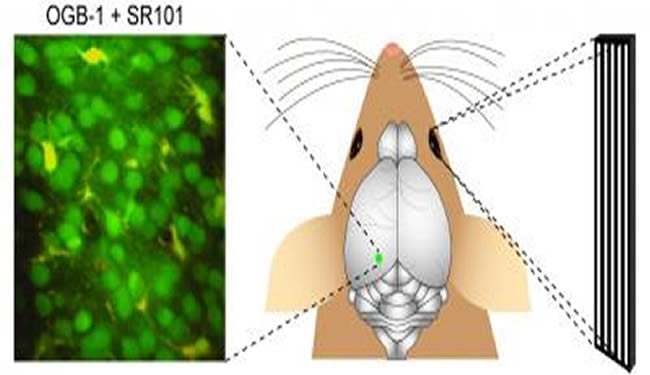 Studying a mouse model of Alzheimer’s disease, neuroscientists at the Technische Universitaet Muenchen have observed correlations between increases in both soluble and plaque-forming beta-amyloid – a protein implicated in the disease process – and dysfunctional developments on several levels: individual cortical neurons, neuronal circuits, sensory cognition, and behavior. Their results, published in Nature Communications, show that these changes progress in parallel and that, together, they reveal distinct stages in Alzheimer’s disease with a specific order in time.

In addition to its well known, devastating effects on memory and learning, Alzheimer’s disease can also impair a person’s sense of smell or vision. Typically these changes in sensory cognition only show themselves behaviorally when the disease is more advanced. A new study sheds light on what is happening in the brain throughout the disease process, specifically with respect to the part of the cerebral cortex responsible for integrating visual information. A team led by Prof. Arthur Konnerth, a Carl von Linde Senior Fellow of the TUM Institute for Advanced Study, has observed Alzheimer’s-related changes in the visual cortex at the single-cell level.

Using a technique called two-photon calcium imaging, the researchers recorded both spontaneous and stimulated signaling activity in cortical neurons of living mice: transgenic mice carrying mutations that cause Alzheimer’s disease in humans, and wild-type mice as a control group. By observing how neuronal signaling responded to a special kind of vision test – in which a simple grating pattern of light and dark bars moves in front of the mouse’s eye – the scientists could characterize the visual circuit as being more or less “tuned” to specific orientations and directions of movement.

Konnerth explains, “Like many Alzheimer’s patients, the diseased mice have impairments in their ability to discriminate visual objects. Our results provide important new insights on the cause that may underlie the impaired behavior, by identifying in the visual cortex a fraction of neurons with a strongly disturbed function.” And within this group, the researchers discovered, there are two subsets of neurons – both dysfunctional, but in completely different ways. One subset, thought to be the first neurons to degenerate, showed no activity at all; the other showed a pathologically high level of activity, rendering these neurons incapable of properly sensing objects in the mouse’s environment. “While around half of the neurons in the visual cortex were disturbed in one way or the other, roughly half responded normally,” notes Christine Grienberger, a doctoral candidate in Konnerth’s institute and first author of this paper. “That could have significant implications for future research in the field of Alzheimer’s disease, as our findings raise the question of whether future work only needs to target this population of neurons that are disturbed in their function.”

The in vivo single-neuron experiments were carried out for three age groups, corresponding to different stages of this progressive, degenerative disease. The results were correlated with other measurements, including soluble beta-amyloid levels and the density of beta-amyloid plaques in the brain tissue. The researchers’ findings show for the first time a progressive decline of function in cortical circuits. “An important conclusion from this study,” Konnerth says, “is that the Alzheimer’s disease-related changes on all levels – including behavior, cortical circuit dysfunction, and the density of amyloid plaques in diseased brains – progress in parallel in a distinct temporal order. In the future, the identification of such stages in patients may help researchers pinpoint stage-specific and effective therapies, with reduced levels of side effects.”