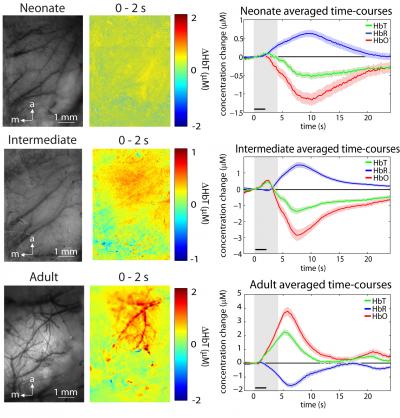 A new study by Columbia Engineering researchers finds that the infant brain does not control its blood flow in the same way as the adult brain. The paper, which the scientists say could change the way researchers study brain development in infants and children, is published in the Proceedings of the National Academy of Sciences.

“The control of blood flow in the brain is very important” says Elizabeth Hillman, associate professor of Biomedical Engineering and of Radiology, who led the research study in her Laboratory for Functional Optical Imaging at Columbia. “Not only are regionally specific increases in blood flow necessary for normal brain function, but these blood-flow increases form the basis of signals measured in fMRI, a critical imaging tool used widely in adults and children to assess brain function. Many prior fMRI studies have overlooked the possibility that the infant brain controls blood flow differently.”

“Our results are fascinating” says Mariel Kozberg, a neurobiology MD-PhD candidate who works under Hillman and is the lead author of the PNAS paper. “We found that the immature brain does not generate localized blood-flow increases in response to stimuli. By tracking changes in blood-flow control with increasing age, we observed the brain gradually developing its ability to increase local blood flow and, by adulthood, generate a large blood-flow response.”

The study results suggest that fMRI experiments in infants and children should be carefully designed to ensure that maturation of blood-flow control can be delineated from changes in neuronal development. “On the other hand,” says Hillman, “our findings also suggest that vascular development may be an important new factor to consider in normal and abnormal brain development, so our findings could represent new markers of normal and abnormal brain development that could potentially be related to a range of neurological or even psychological conditions.”

Functional magnetic resonance imaging, or fMRI, is one of several brain-imaging methods that measure changes in blood flow to detect the presence and location of neuronal activity. In adults, blood-flow increases occur in specific regions of the brain during a particular task like moving your hand or reacting to a stimulus. FMRI relies upon measuring decreases in deoxygenated hemoglobin resulting from this blood-flow increase to understand which parts of the brain are responsible for different actions and emotions. FMRI and other brain-imaging methods are currently being widely used to explore brain development, and to understand disorders in infants and children including autism and ADHD.

“Until now, we had been studying blood flow in the adult brain,” Hillman notes, “but we became interested in several studies that reported odd, sometimes negative, blood-flow responses in newborn and premature infants and decided to carefully explore what was different about the immature brain compared to the adult. Initially, I saw these studies as a way to watch how the adult system assembled itself during development. Then we realized how important our findings were to those using brain imaging to study child development and developmental disorders.”

The team used a unique multispectral optical intrinsic signal imaging system (MS-OISI) built in Hillman’s lab to perform the research. MS-OISI is a high-speed, high-resolution imaging approach that takes advantage of the different absorption spectra of deoxygenated and oxygenated hemoglobin in order to determine changes in the concentrations of each. The researchers found that, with increasing age, there was a gradual development of a localized increase in blood flow, while a strong, delayed decrease in flow was consistently present. Only by adulthood was the positive increase able to balance the decrease in flow.

“Our results suggest that the infant brain might not be able to generate localized blood-flow increases, even if there is neuronal activity occurring, and that the development of blood- flow control occurs in parallel with early neuronal development,” says Kozberg. “This could suggest that fMRI studies of infants and children may be detecting changes in both vascular and neuronal development—in fact, vascular development may be an important new factor to consider in normal and abnormal brain development.”

The team also found that the younger age groups were highly sensitive to blood pressure increases in response to stimulation and that these increases can cause large increases in blood flow across the brain. “This finding indicates that the newborn brain is also unable to regulate its overall blood-flow levels,” Kozberg explains. “This could explain earlier fMRI results in infants and children that were sometimes positive and sometimes negative, because it is difficult to tell whether blood pressure increases are occurring in infants and children. This result suggests that great care should be taken in setting stimulus thresholds in young subjects.”

The researchers add that, since the newborn brain appears to be able to sustain itself without tightly controlled blood flow, their findings suggest that the infant brain may be intrinsically more resistant to damage due to a lack of oxygen than the adult brain. “This could be an important property to understand, both in terms of understanding how best to treat blood-flow problems in the newborn infant brain, which can cause lifelong problems such as cerebral palsy, and to potentially better understand how to treat the adult brain in conditions such as stroke,” Hillman observes.

“Our lab operates at the intersection of neuroscience and engineering,” continues Hillman.” Not only do we develop the imaging systems that let us investigate the living brain in new ways, but like all engineers, we’re fascinated with figuring out ‘how things work,’ and the brain is no exception.”

Next steps for Hillman and her team include further defining the cellular mechanisms underlying the developing hemodynamic response at a cellular and microvascular level, using methods such as high-speed and multi-plane in-vivo two-photon microscopy, another technique developed in the lab. They’re particularly interested in tracking changes in neuronal activity, microvascular architecture and connectivity, and the distribution and activity of other cellular populations thought to be associated with neurovascular coupling as a function of development.

“This will help us understand how the neonatal brain is different, and better understand how mature blood-flow control mechanisms in the adult brain work,” says Kozberg.

Adds Hillman, “We are also keen to take this research into the clinic and explore whether our findings could improve diagnosis and monitoring of newborn infants. Our findings so far feel like just the tip of the iceberg. There is so much more for us to do now to understand why the infant brain is so different, and how we can use our findings to improve understanding of a wealth of devastating childhood and developmental conditions.”

Notes about this neurology and neurodevelopment research

This research was supported by grants and student fellowships from the National Institute of Neurological Disorders and Stroke, the National Eye Institute, the National Science Foundation, the National Defense Science and Engineering Graduate Fellowship, the Medical Scientist Training Program, and the Human Frontier Science Program. Hillman is also a member of the Columbia University graduate program in Neurobiology and Behavior and the Kavli Institute for Brain Sciences.