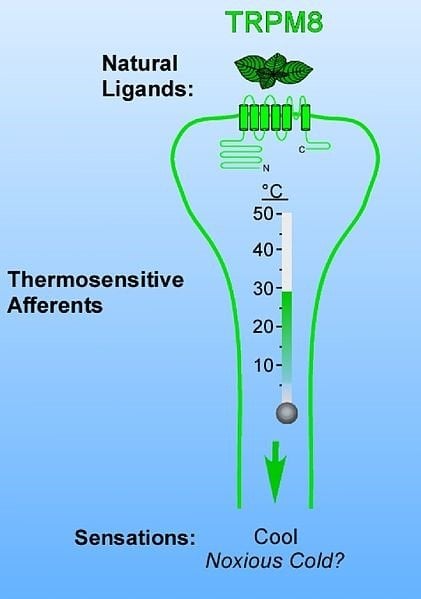 Researchers discovered a link between the experience of cold and a protein known as TRPM8 (pronounced trip-em-ate), which a sensor of cold temperatures in neurons in the skin, as well as a receptor for menthol, the cooling component of mint. Credited to David D. McKemy.
Home
Electrophysiology

Scientists Turn Off the Ability to Feel Cold

USC neuroscientists have isolated chills at a cellular level, identifying the sensory network of neurons in the skin that relays the sensation of cold.

David McKemy, associate professor of neurobiology in the USC Dornsife College of Letters, Arts and Sciences, and his team managed to selectively shut off the ability to sense cold in mice while still leaving them able to sense heat and touch.

In prior work, McKemy discovered a link between the experience of cold and a protein known as TRPM8 (pronounced trip-em-ate), which a sensor of cold temperatures in neurons in the skin, as well as a receptor for menthol, the cooling component of mint. Now, in a paper appearing in the Journal of Neuroscience, McKemy and his co-investigators have isolated and ablated the neurons that express TRPM8, giving them the ability to test the function of these cells specifically.

Using mouse-tracking software program developed by one of McKemy’s students, the researchers tested control mice and mice without TRPM8 neurons on a multi-temperature surface. The surface temperature ranged from 0 degrees to 50 degrees Celsius (32 to 122 degrees Farenheit), and mice were allowed to move freely among the regions.

The researchers found that mice depleted of TRPM8 neurons could not feel cold, but still responded to heat. Control mice tended to stick to an area around 30 degrees Celsius (86 degrees Fahrenheit) and avoided both colder and hotter areas. But mice without TRPM8 neurons avoided only hotter plates and not cold, even when the cold should have been painful or was potentially dangerous.

In tests of grip strength, responses to touch, or coordinated movements, such as balancing onto a rod while it rotated, there was no difference between the control mice and the mice without TRPM8-expressing neurons.

By better understanding the specific ways in which we feel sensations, scientists hope to one day develop better pain treatments without knocking out all ability to feel for suffering patients.

“The problem with pain drugs now is that they typically just reduce inflammation, which is just one potential cause of pain, or they knock out all sensation, which often is not desirable,” McKemy said. “One of our goals is to pave the way for medications that address the pain directly, in a way that does not leave patients completely numb.”