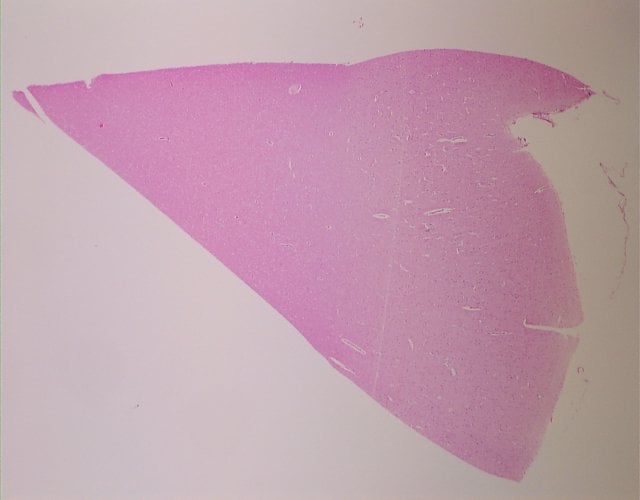 This is an image of a Cerebral Cortex slice, width ca. 10.5mm. The image is credited to the US Government.
Home
Featured

Researchers Turn One Form of Neuron into Another in the Brain

A new finding by Harvard stem cell biologists turns one of the basics of neurobiology on its head, demonstrating that it is possible to turn one type of already differentiated neuron into another within the brain.

The discovery by Paola Arlotta and Caroline Rouaux “tells you that maybe the brain is not as immutable as we always thought, because at least during an early window of time one can reprogram the identity of one neuronal class into another,” said Arlotta, an Associate Professor in Harvard’s Department of Stem Cell and Regenerative Biology (SCRB).

Arlotta and Rouaux now have proven that neurons too can change their mind. The work is being published on-line by the journal Nature Cell Biology.

In their experiments, Arlotta targeted callosal projection neurons, which connect the two hemispheres of the brain, and turned them into neurons similar to corticospinal motor neurons, one of two populations of neurons destroyed in Amyotrophic Lateral Sclerosis (ALS), also known as Lou Gehrig’s disease. To achieve such reprogramming of neuronal identity, the researchers used a transcription factor called Fezf2, which long has been known for playing a central role in the development of corticospinal neurons in the embryo.

What makes the finding even more significant is that the work was done in the brains of living mice, rather than in collections of cells in laboratory dishes. The mice were young, so researchers still do not know if neuronal reprogramming will be possible in older laboratory animals and humans. If it is possible, this has enormous implications for the treatment of neurodegenerative diseases.

“Neurodegenerative diseases typically effect a specific population of neurons, leaving many others untouched. For example, in ALS it is corticospinal motor neurons in the brain and motor neurons in the spinal cord, among the many neurons of the nervous system, that selectively die,” Arlotta said. “What if one could take neurons that are spared in a given disease and turn them directly into the neurons that die off? In ALS, if you could generate even a small percentage of corticospinal motor neurons, it would likely be sufficient to recover basic functioning,” she said.

The experiments that led to the new finding began five years ago, when “we wondered: in nature you never seen a neuron change identity; are we just not seeing it, or is this the reality? Can we take one type of neuron and turn it into another?” Arlotta and Rouaux asked themselves.

Over the course of the five years, the researchers analyzed “thousands and thousands of neurons, looking for many molecular markers as well as new connectivity that would indicate that reprogramming was occurring,” Arlotta said. “We could have had this two years ago, but while this was a conceptually very simple set of experiments, it was technically difficult. The work was meant to test important dogmas on the irreversible nature of neurons in vivo. We had to prove, without a shadow of a doubt, that this was happening.”

The work in Arlotta’s lab is focused on the cerebral cortex, but “it opens the door to reprogramming in other areas of the central nervous system,” she said.

Arlotta, an HSCI principal faculty member, is now working with colleague Takao Hensch, of Harvard’s Department of Molecular and Cellular Biology, to explicate the physiology of the reprogrammed neurons, and learn how they communicate within pre-existing neuronal networks.

“My hope is that this will facilitate work in a new field of neurobiology that explores the boundaries and power of neuronal reprogramming to re-engineer circuits relevant to disease,” said Paola Arlotta.

Notes about this neurobiology article

The work was financed by a seed grant from HSCI, and by support from the National Institutes of Health and the Spastic Paraplegia Foundation.