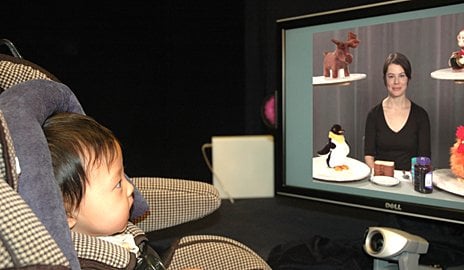 Researchers at Yale School of Medicine are able to detect deficits in social attention in infants as young as six months of age who later develop Autism Spectrum Disorders (ASD). Published in Biological Psychiatry, the results showed that these infants paid less attention to people and their activities than typically developing babies.

Katarzyna Chawarska, associate professor at the Yale Child Study Center, and her colleagues investigated whether six-month-old infants later diagnosed with ASD showed prodromal symptoms, early signs of ASD such as an impaired ability to attend to social overtures and activities of others. Before this study, it had not been clear whether these prodromal symptoms were present in the first year of life.

“This study highlights the possibility of identifying certain features linked to visual attention that can be used for pinpointing infants at greatest risk for ASD in the first year of life,” said Chawarska. “This could make earlier interventions and treatments possible.”

Chawarska and her team administered an eye-tracking task to 67 infants at high risk for developing autism, and 50 low-risk infants. The three-minute video was designed to capture the ebbs and flows of social events, depicting a woman engaged in several familiar activities such as making a sandwich, looking at toys, or speaking. While making sandwiches, the actress occasionally looked at the camera and tried to engage the babies by making eye contact and saying “How are you, baby?” “You are so cute!” and “Did you see the tigers?” There were no breaks in the video to re-engage or re-center the babies’ attention, requiring them to attend to whatever they found interesting in their visual field, as they would in real-life social situations. Chawarska and her team used eye-tracking technology to monitor how often the infants looked at the scene, the toys, the woman, and her eyes and mouth.

Compared with the control groups, six-month-old infants later diagnosed with ASD looked less at the social scene, and when they did pay attention to the scene, they spent less time monitoring the woman’s face. The team is now working on determining the specific causes that lead to decrease of social attention in infants with emerging social vulnerabilities.

Notes about this Autism research article

Our Memory for Objects Might Be Better Than We Think

Other authors on the study include Suzanne Macari and Frederick Shic.