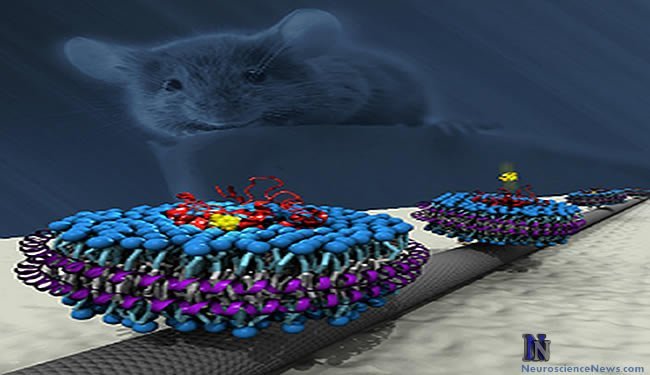 Penn researchers have helped develop a nanotech device that combines carbon nanotubes with olfactory receptor proteins, the cell components in the nose that detect odors.

Because olfactory receptors belong to a larger class of proteins that are involved in passing signals through the cell membrane, these devices could have applications beyond odor sensing, such as pharmaceutical research.

The research was led by professor A. T. Charlie Johnson, postdoctoral fellow Brett R. Goldsmith and graduate student Mitchell T. Lerner of the Department of Physics and Astronomy in the School of Arts and Sciences, along with assistant professor Bohdana M. Discher and postdoctoral fellow Joseph J. Mitala Jr. of the Department of Biophysics and Biochemistry at Penn’s Perelman School of Medicine. They collaborated with researchers from the Monell Chemical Senses Center, the University of Miami, the University of Illinois, Princeton University and two private companies, Nanosense Inc. and Evolved Machines Inc.

Their work was published in the journal ACS Nano.

The Penn team worked with olfactory receptors derived from mice, but all olfactory receptors are part of a class of proteins known as G Protein Coupled Receptors, or GPCRs. These receptors sit on the outer membrane of cells, where certain chemicals in the environment can bind to them. The binding action is the first step in a chemical cascade that leads to a cellular response; in the case of an olfactory receptor, this cascade leads to the perception of a smell.

The Penn team succeeded in building an interface between this complicated protein and a carbon nanotube transistor, allowing them to convert the chemical signals the receptor normally produces to electrical signals, which could be incorporated in any number of tools and gadgets.

“Our nanotech devices are read-out elements; they eavesdrop on what the olfactory receptors are doing, specifically what molecules are bound to them,” Johnson said.

As the particular GPCR the team worked with was an olfactory receptor, the test case for their nanotube device was to function as sensor for airborne chemicals.

“If there’s something in the atmosphere that wants to bind to this molecule, the signal we get through the nanotube is about what fraction of the time is something bound or not. That means we can get a contiguous read out that’s indicative of the concentration of the molecule in the air,” Johnson said.

While one could imagine scaling up these nanotube devices into a synthetic nose — making one for each of the approximately 350 olfactory GPCRs in a human nose, or the 1,000 found in a dog’s — Johnson thinks that medical applications are much closer to being realized.

“GPCRs are common drug targets,” he said. “Since they are known to be very important in cell-environment interactions, they’re very important in respect to disease pathology. In that respect, we now have a pathway into interrogating what those GPCRs actually respond to. You can imagine building a chip with many of these devices, each with different GPCRs, and exposing them all at once to various drugs to see which is effective at triggering a response.”

Figuring out what kinds of drugs bind most effectively to GPCRs is important because pathogens often attack through those receptors as well. The better a harmless chemical attaches to a relevant GPCR, the better it is at blocking the disease.

The Penn team also made a technical advancement in stabilizing GPCRs for future research.

“In the past, if you take a protein out of a cell and put it onto a device, it might last for a day. But here, we embedded it in a nanoscale artificial cell membrane, which is called a nanodisc,” Johnson said. “When we did that, they lasted for two and half months, instead of a day.”

Increasing the lifespans of such devices could be beneficial to two scientific fields with increasing overlap, as the as evidenced by the large, interdisciplinary research team involved in the study.

“The big picture is integrating nanotechnology with biology, “ Johnson said. “These complicated molecular machines are the prime method of communication between the interior of the cell and the exterior, and now we’re incorporating their functionality with our nanotech devices.”

Notes about this neuroscience and nanotechnology research article

In addition to Johnson, Goldsmith, Lerner, Discher and Mitala, the research was conducted by Jesusa Josue and Joseph G. Brand of Monell; Alan Gelperin of Monell and Princeton; Ana Castro and Charles W. Luetje of the University of Miami; Timothy H. Bayburt and Stephen G. Sligar of the University of Illinois, Urbana; Samuel M. Khamis of Adamant Technologies, Ryan A. Jones of Nanosense Inc.; and Paul A. Rhodes of Nanosense Inc. and Evolved Machines Inc.

The research was supported by the Defense Advanced Research Projects Agency’s RealNose project, Penn’s Nano/Bio Interface Center, the National Science Foundation and the Department of Defense.