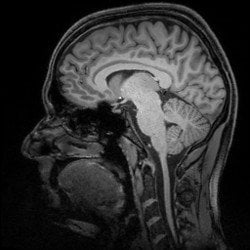 German researchers gain new insights into the functioning of the brain.

While the human brain is in a resting state, patterns of neuronal activity which are associated to specific memories may spontaneously reappear. Such recurrences contribute to memory consolidation – i.e. to the stabilization of memory contents. Scientists of the DZNE and the University of Bonn are reporting these findings in the current issue of The Journal of Neuroscience. The researchers headed by Nikolai Axmacher performed a memory test on a series of persons while monitoring their brain activity by functional magnetic resonance imaging (fMRI). The experimental setup comprised several resting states including a nap inside a neuroimaging scanner. The study indicates that resting periods can generally promote memory performance.

Depending on one’s mood and activity different regions are active in the human brain. Perceptions and thoughts also influence this condition and this results in a pattern of neuronal activity which is linked to the experienced situation. When it is recalled, similar patterns, which are slumbering in the brain, are reactivated. How this happens, is still largely unknown.

The prevalent theory of memory formation assumes that memories are stored in a gradual manner. At first, the brain stores new information only temporarily. For memories to remain in the long term, a further step is required. „We call it consolidation“, Dr. Nikolai Axmacher explains, who is a researcher at the Department of Epileptology of the University of Bonn and at the Bonn site of the DZNE. “We do not know exactly how this happens. However, studies suggest that a process we call reactivation is of importance. When this occurs, the brain replays activity patterns associated with a particular memory. In principle, this is a familiar concept. It is a fact that things that are actively repeated and practiced are better memorized. However, we assume that a reactivation of memory contents may also happen spontaneously without there being an external trigger.”

A memory test inside the scanner

Axmacher and his team tested this hypothesis in an experiment that involved ten healthy participants with an average age of 24 years. They were shown a series of pictures, which displayed – among other things – frogs, trees, airplanes and people. Each of these pictures was associated with a white square as a label at a different location. The subjects were asked to memorize the position of the square. At the end of the experiment all images were shown again, but this time without the label. The study participants were then asked to indicate with a mouse cursor where the missing mark was originally located. Memory performance was measured as the distance between the correct and the indicated position.

“This is an associative task. Visual and spatial perceptions have to be linked together”, the researcher explains. “Such tasks involve several brain regions. These include the visual cortex and the hippocampus, which takes part in many memory processes.”

Brain activity was recorded by fMRI during the entire experiment, which lasted several hours and included resting periods and a nap inside the neuroimaging scanner.

For data processing a pattern recognition algorithm was trained to look for similarities between neuronal patterns observed during initial encoding and patterns appearing at later occasions. “This method is complex, but quite effective”, Axmacher says. “Analysis showed that neuronal activity associated with images that were shown initially did reappear during subsequent resting periods and in the sleeping phase.”

Memory performance correlated with the replay of neuronal activity patterns. “The more frequently a pattern had reappeared, the more accurate test participants could label the corresponding image”, Axmacher summarizes the findings. “These results support our assumption that neural patterns can spontaneously reappear and that they promote the formation of long-lasting memory contents. There was already evidence for this from animal studies. Our experiment shows that this phenomenon also happens in humans.”

How Has the COVID-19 Pandemic Affected Our Dreams?

The study indicates that resting periods can generally foster memory performance. “Though, our data did not show whether sleeping had a particular effect. This may be due to the experimental setup, which only allowed for a comparatively short nap”, Axmacher reckons. “By contrast, night sleep is considered to be beneficial for the consolidation of memory contents. But it usually takes many hours and includes multiple transitions between different stages of sleep. However, other studies suggest that even short naps may positively affect memory consolidation.”

An objective look at memory contents

It is up to speculation whether the recurring brain patterns triggered conscious memories or whether they remained below the threshold of perception. “I think it is reasonable to assume that during resting periods the test participants let their mind wander and that they recalled images they had just seen before. But this is a matter of subjective perception of the test participants. That’s something we did not look at because it is not essential for our investigation“, Axmacher says. “The strength of our approach lies rather in the fact that we look at memory contents from the outside, in an objective manner. And that we can evaluate them by pattern recognition. This opens ways to many questions of research. For example, brain patterns that reoccur spontaneously are also of interest in the context of experimental dream research.”