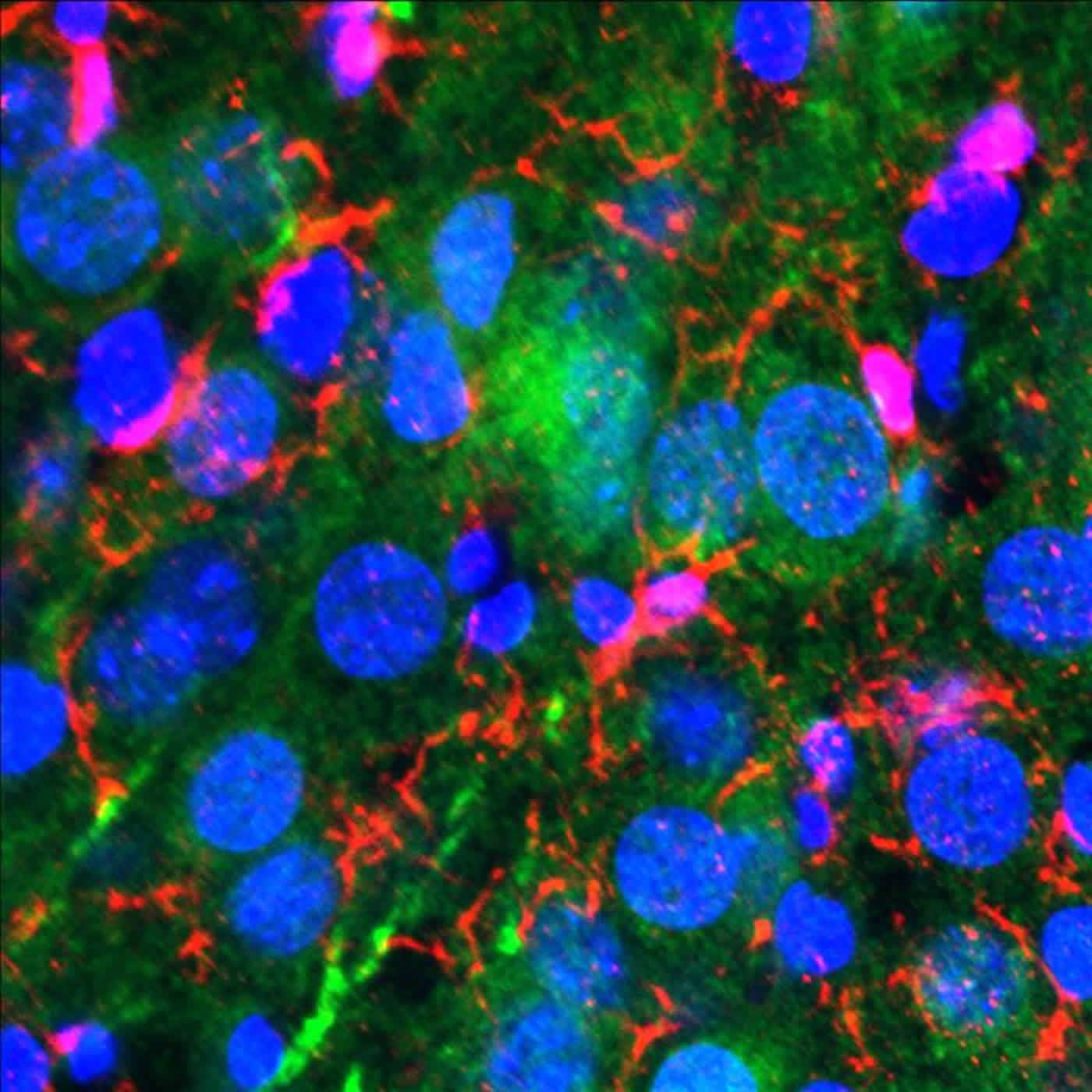 The hippocampus of a female mouse that has been genetically engineered to overproduce TIA1 protein. (The green color indicates neurons that produce excess TIA1, while the blue color lights up the nucleus of each cell to permit easier visualization of cells within the tissue). Increased levels of TIA1 protein lead to heightened activity of immune system cells such as microglia (shown in red). Immune system genes and cells not only regulate immune function, but also modulate brain function, including learning and memory. The image is credited to Joseph Rayman/Kandel lab/Columbia's Zuckerman Institute.

Summary: A new study reveals how a prion-like protein that is encoded by the TIA1 gene helps to regulate fear memories. TIA1, researchers report, may be a promising new target for the treatment of PTSD.

More than 30 years ago, scientists discovered that neurological illnesses such as mad cow and Creutzfeldt-Jakob diseases are caused by misfolded proteins called prions. But in recent years, Nobel laureate Eric Kandel, MD, demonstrated in mice that some prions are beneficial and serve important biological functions in the brain and body. And today, new Columbia research from Dr. Kandel and his colleague Joseph Rayman, PhD, describes how one such prion-like protein, encoded by a gene called TIA1, helps the brain keep fearful memories in check. Without this gene, female mice exhibit the tell-tale signs of post-traumatic stress disorder, or PTSD.

The results of this study, published today in Cell Reports, point to TIA1 as a new target in the fight against PTSD, which is about twice as common in women as in men.

“Deciphering the interplay between biology and environment that gives rise to all psychiatric disorders, including PTSD, has proven incredibly difficult,” said Dr. Kandel, who is University Professor and codirector of Columbia’s Mortimer B. Zuckerman Mind Brain Behavior Institute, as well as Kavli Professor of Brain Science at Columbia. “Today’s discovery about TIA1 has uncovered one such key component to that interplay. Our research offers a promising way forward for developing treatments that mitigate the underlying causes of PTSD and other related psychiatric illnesses.”

Prions were originally described in the context of neurological conditions called transmissible spongiform encephalopathies, which include mad cow disease in cattle and Creutzfeldt-Jakob disease in people. In these diseases, the misfolded prions clump together inside brain cells called neurons, forming large aggregates that cause neurons to degrade and die. Upon neuronal death, the prions are released and infect neighboring cells, much like a virus. Over time, this process leads to devastating and sometimes deadly neurological symptoms.

“When neurons undergo stress, such as in response to a viral infection, the TIA1 protein sequesters non-essential biomolecules inside the cell,” said Dr. Rayman, who is an associate research scientist in the Kandel lab at Columbia’s Zuckerman Institute and the paper’s first author. “This allows the cell to focus all its efforts on fighting the stress.”

TIA1 is present in many brain regions but is particularly active in the ventral hippocampus, an area known to regulate memories associated with stress and fear. Drs. Kandel and Rayman wondered if disruptions to TIA1 function could cause disruptions in fear memory — which plays a key role in PTSD.

To find out, the researchers changed the amount of TIA1 in the ventral hippocampus of both male and female mice. The scientists then trained the mice to associate an innocuous smell, that of ethanol, with a stressful experience. When placed in other ethanol-scented environments, the animals exhibited avoidance behavior: they tended to move away from the stressful scent.

But when the researchers removed TIA1, they saw a change in behavior — a change that was restricted to female mice. Removing TIA1 appeared to have no effect on the males, but the females’ avoidance behavior skyrocketed; their fearful memories were heightened significantly.

The researchers argue that this marked sex difference may be an essential key to uncovering why the prevalence of PTSD is so much higher in women, as compared to men. It also emphasizes the importance of including female mice in scientific research, a practice that has long been discouraged by the scientific community.

“The inclusion of female mice in scientific studies is a recent phenomenon; researchers once reasoned that cyclical hormone changes in females would complicate study results,” said Dr. Rayman. “But including female mice in our study proved transformational. We would never have discovered the importance of TIA1 had we not examined the female brain.”

Psychiatric disorders are notoriously complex. They are thought to be linked to many genes, each of which contributes only a small amount to the problem. But Drs. Kandel and Rayman are confident that their work can be extended to identify and treat disorders in people. For example, PTSD can ultimately be traced back to abnormal processing of fear memory. And the same brain regions responsible for fear memory in mice are responsible for fear memory in people.

“Not only that, but the gene that encodes TIA1 in mice also exists in the human genome,” said Dr. Rayman. “To search for links between TIA1 activity levels and stress responses in humans, we are currently analyzing DNA from individuals in Sweden.”

“We hope our work, combined with the work of others, will lead to the identification of a large number of genes, each of which contributes a certain amount of PTSD risk,” said Dr. Kandel, who is also a Senior Investigator at the Howard Hughes Medical Institute. “Advances in computational and theoretical modeling could soon allow us look at a person’s particular genetic composition and identify his or her risk for developing a psychiatric disorder, such as PTSD — and then offer the best way to treat it at the molecular level.”

Summary
TIA1 is a prion-related RNA-binding protein whose capacity to form various types of intracellular aggregates has been implicated in neurodegenerative disease. However, its role in normal brain function is poorly understood. Here, we show that TIA1 bidirectionally modulates stress-dependent synaptic plasticity in the hippocampus, a brain region involved in fear memory and olfactory discrimination learning. At the behavioral level, conditioned odor avoidance is potentiated by TIA1 deletion, whereas overexpression of TIA1 in the ventral hippocampus inhibits both contextual fear memory and avoidance. However, the latter genetic manipulations have little impact on other hippocampus-dependent tasks. Transcriptional profiling indicates that TIA1 presides over a large network of immune system genes with modulatory roles in synaptic plasticity and long-term memory. Our results uncover a physiological and partly sex-dependent function for TIA1 in fear memory and may provide molecular insight into stress-related psychiatric conditions, such as post-traumatic stress disorder (PTSD) and anxiety.