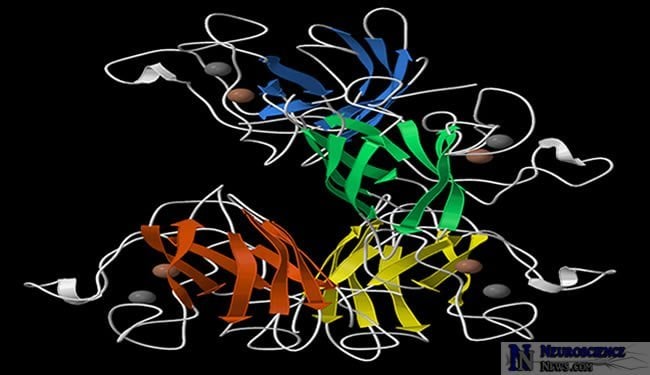 Max Planck researchers discovered that large, less hydrophobic proteins with a significant increase of disorder in their structures were more likely to suffer protein misfolding and protein aggregation problems.

This research may lead to the use of molecular chaparones to shield aggregates as a therapy in neurodegenerative diseases.

Learn more details about this research in the release below.

Protein aggregation underlies several neurodegenerative diseases such as Alzheimer’s, Huntington’s chorea or Parkinson’s. Scientists at the Max Planck Institute of Biochemistry (MPIB) in Martinsried near Munich, Germany, now discovered a fundamental mechanism which explains how toxic protein aggregation occurs and why it leads to a widespread impairment of essential cellular functions. “Not all proteins are affected by aggregation”, says Heidi Olzscha, PhD student at the MPIB. “Especially those proteins are susceptible, which possess specific structural characteristics and are involved in important biological processes.” (Cell, January 7, 2011)

To fulfill their different functions, proteins have to acquire the correct three-dimensional structure. In other words, polypeptides have to fold first. Molecular chaperones, a diverse group of conserved proteins, have specialized to assist other proteins during their folding. If the chaperones fail, misfolding and aggregation of the newly synthesized and pre-existing proteins might occur. In the worst case, this results then in neurodegenerative diseases, such as Alzheimer’s, Huntington’s chorea or Parkinson’s. Alzheimer’s disease, for example, develops because the A-beta and tau proteins aggregate, which leads to neuronal dysfunction and cell death. According to Alzheimer Forschung Initiative e. V., approximately 1.2 million people suffer from this disease only in Germany. The risk to fall ill grows with increasing age.

Scientists in the Department of Cellular Biochemistry at the Max Planck Institute of Biochemistry, headed by F.-Ulrich Hartl, now established a novel experimental model aimed at elucidating cellular protein misfolding and discovered why the misfolding and aggregation are deleterious for cells. They prepared several artificial aggregating proteins without any biological function and introduced them into cells. These model proteins clumped together, coaggregating many natural proteins and, in that way, disturbing their function. By means of quantitative proteomics, the researchers discovered that the affected proteins share certain structural characteristics which predispose them for the co-aggregation: They are large in size, less hydrophobic and show a significant increase of disorder in their structure.

“These are proteins that have not only many, but also very important functions in the cell”, explains Martin Vabulas. “For instance, they are responsible for the stability of the cytoskeleton, the organization of the chromatin in nucleus, the transcription of DNA to RNA or the synthesis of proteins. Simultaneous disturbance of several of these essential processes is most probably the reason of the cellular break-down. As a consequence, protein misfolding diseases develop.”

Molecular chaperones could possibly prevent this dire scenario. They are able to shield the aggregates, so that the aggregates cannot get in touch with other proteins anymore. The scientists hope that their new insights might help to develop novel therapeutic strategies in the battle against neurodegenerative diseases, especially at the earlier stages, before the irreversible collapse of cellular protein network sets in.