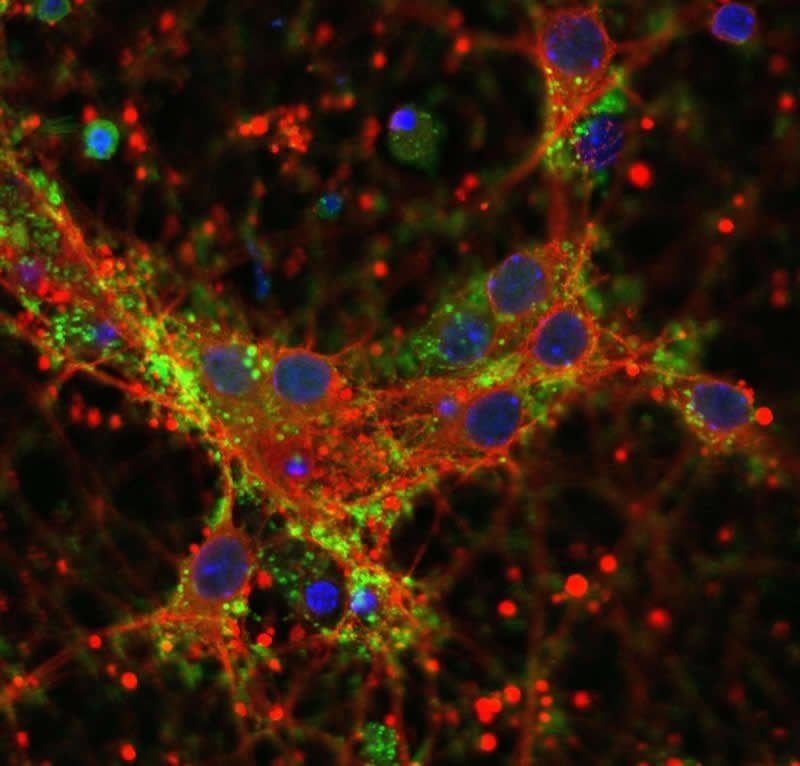 Microscopic image of mouse neurons to which the patient-derived α-synuclein protein was administered. The protein deposits (green) form after seven days. Image is credited to Anke Van der Perren.

Summary: Researchers have identified two different shapes of alpha-synuclein associated with multiple systems atrophy (MSA) and Lewy body dementia. The structure of the protein is helical in MSA, causing the symptoms to occur more quickly and aggressively. In Lewy body dementia, the protein takes on a cylindrical form.

The accumulation of one particular protein in the brain is at the basis of three very different age-related conditions. Until recently, nobody understood how this was possible. Research by the Laboratory for Neurobiology and Gene Therapy (KU Leuven) now reveals that the shape of the protein determines the clinical picture.

The presence of α-synuclein protein deposits in the brain is characteristic for three different diseases: Parkinson’s disease (PD), multiple system atrophy (MSA) and dementia with Lewy bodies (DLB). Although these disorders are part of the same family, they are clinically and pathologically very different.

Parkinson’s disease affects around two percent of the population over 60. The condition manifests itself mainly in motor problems. Dementia with Lewy bodies is less common (0.4 percent of people over 65), but is still the second most common form of dementia, after Alzheimer’s disease. Multiple system atrophy is a rare but extremely aggressive disease for which there is virtually no treatment. It causes a variety of health issues, including general pain, bladder problems and low blood pressure, as well as motor problems. Most patients succumb to the disease within five to ten years.

In collaboration with their colleagues from the French National Centre for Scientific Research (CNRS) and Imperial College London, researchers of the KU Leuven Laboratory for Neurobiology and Gene Therapy isolated the α-synuclein protein from brain tissue of deceased PD, MSA and DLB patients. This protein was then multiplied and reproduced with a technique that was specifically designed for this purpose. The different protein shapes were carefully studied in the lab and introduced in lab animals to simulate the disease processes.

The researchers were able to identify two shapes of the protein: a helical one in MSA and Parkinson’s disease, and a cylindrical one in DLB. The shape also determined the severity of the disease symptoms: in MSA the symptoms occurred more quickly and aggressively, while in DLB they were more moderate.

“Previously, it was a mystery why one and the same protein caused three different brain diseases,” says research coordinator Dr Anke Van der Perren. “Now, for the first time, we’ve been able to identify different shapes of α-synuclein protein deposits in patients. Depending on the shape, a different disorder and, thus, a different clinical picture occurs.”

The new insights on the origin and structure of the protein shapes may, in time, lead to an earlier and better diagnosis, says Professor Veerle Baekelandt. “To this day, it’s very difficult to diagnose these three brain disorders. We want to further unravel the complex process of the protein deposits to gain a better understanding of how the diseases develop. In time, we hope that we’ll be able to detect these harmful protein shapes and that a specific treatment can be found to slow down or even stop the disease process.”

Synucleinopathies, such as Parkinson’s disease (PD), multiple system atrophy (MSA), and dementia with Lewy bodies (DLB), are defined by the presence of α-synuclein (αSYN) aggregates throughout the nervous system but diverge from one another with regard to their clinical and pathological phenotype. The recent generation of pure fibrillar αSYN polymorphs with noticeable differences in structural and phenotypic traits has led to the hypothesis that different αSYN strains may be in part responsible for the heterogeneous nature of synucleinopathies. To further characterize distinct αSYN strains in the human brain, and establish a structure-pathology relationship, we pursued a detailed comparison of αSYN assemblies derived from well-stratified patients with distinct synucleinopathies. We exploited the capacity of αSYN aggregates found in the brain of patients suffering from PD, MSA or DLB to seed and template monomeric human αSYN in vitro via a protein misfolding cyclic amplification assay. A careful comparison of the properties of total brain homogenates and pure in vitro amplified αSYN fibrillar assemblies upon inoculation in cells and in the rat brain demonstrates that the intrinsic structure of αSYN fibrils dictates synucleinopathies characteristics. We report that MSA strains show several similarities with PD strains, but are significantly more potent in inducing motor deficits, nigrostriatal neurodegeneration, αSYN pathology, spreading, and inflammation, reflecting the aggressive nature of this disease. In contrast, DLB strains display no or only very modest neuropathological features under our experimental conditions. Collectively, our data demonstrate a specific signature for PD, MSA, and DLB-derived strains that differs from previously described recombinant strains, with MSA strains provoking the most aggressive phenotype and more similarities with PD compared to DLB strains.