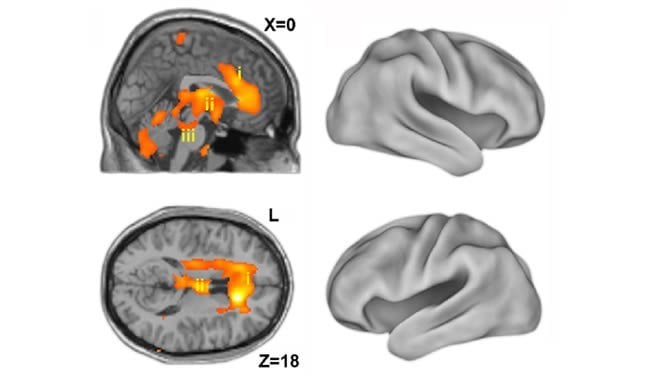 Primitive Consciousness Emerges First as You Awaken from Anesthesia

Awakening from anesthesia is often associated with an initial phase of delirious struggle before the full restoration of awareness and orientation to one’s surroundings. Scientists now know why this may occur: primitive consciousness emerges first.

Using brain imaging techniques in healthy volunteers, a team of scientists led by Adjunct Professor Harry Scheinin, M.D. from the University of Turku, Turku, Finland in collaboration with investigators from the University of California, Irvine, USA, have now imaged the process of returning consciousness after general anesthesia. The emergence of consciousness was found to be associated with activations of deep, primitive brain structures rather than the evolutionary younger neocortex. These results may represent an important step forward in the scientific explanation of human consciousness. The study was part of the Research Programme on Neuroscience by the Academy of Finland.

“We expected to see the outer bits of brain, the cerebral cortex (often thought to be the seat of higher human consciousness), would turn back on when consciousness was restored following anesthesia. Surprisingly, that is not what the images showed us. In fact, the central core structures of the more primitive brain structures including the thalamus and parts of the limbic system appeared to become functional first, suggesting that a foundational primitive conscious state must be restored before higher order conscious activity can occur” Scheinin said.

Twenty young healthy volunteers were put under anesthesia in a brain scanner using either dexmedetomidine or propofol anesthetic drugs. The subjects were then woken up while brain activity pictures were being taken. Dexmedetomidine is used as a sedative in the intensive care unit setting and propofol is widely used for induction and maintenance of general anesthesia. Dexmedetomidine-induced unconsciousness has a close resemblance to normal physiological sleep, as it can be reversed with mild physical stimulation or loud voices without requiring any change in the dosing of the drug. This unique property was critical to the study design, as it enabled the investigators to separate the brain activity changes associated with the changing level of consciousness from the drugrelated effects on the brain. The staterelated changes in brain activity were imaged with positron emission tomography (PET).

The emergence of consciousness, as assessed with a motor response to a spoken command, was associated with the activation of a core network involving subcortical and limbic regions that became functionally coupled with parts of frontal and inferior parietal cortices upon awakening from dexme-detomidine-induced unconsciousness. This network thus enabled the subjective awareness of the external world and the capacity to behaviorally express the contents of consciousness through voluntary responses. Interestingly, the same deep brain structures, i.e. the brain stem, thalamus, hypothalamus and the anterior cingulate cortex, were activated also upon emergence from propofol anesthesia, suggesting a common, drug-independent mechanism of arousal. For both drugs, activations seen up-on regaining consciousness were thus mostly localized in deep, phylogenetically old brain structures rather than in the neocortex.

The researchers speculate that because current depth-of-anesthesia monitoring technology is based on cortical electroencephalography (EEG) measurement (i.e., measuring electrical signals on the surface of the scalp that arise from the brain’s cortical surface), their results help to explain why these devices fail in differentiating the conscious and unconscious states and why patient awareness during general anesthesia may not always be detected. The results presented here also add to the current understanding of anesthesia mechanisms and form the foundation for developing more reliable depth-of-anesthesia technology.

The anesthetized brain provides new views into the emergence of consciousness. Anesthetic agents are clinically useful for their remarkable property of being able to manipulate the state of consciousness. When given a sufficient dose of an anesthetic, a person will lose the precious but mysterious capacity of being aware of one’s own self and the surrounding world, and will sink into a state of oblivion. Conversely, when the dose is lightened or wears off, the brain almost magically recreates a subjective sense of being as experience and awareness returns. The ultimate nature of consciousness remains a mystery, but anesthesia offers a unique window for imaging internal brain activity when the subjective phenomenon of consciousness first vanishes and then re-emerges. This study was designed to give the clearest picture so far of the internal brain processes involved in this phenomenon.

The results may also have broader implications. The demonstration of which brain mechanisms are involved in the emergence of the conscious state is an important step forward in the scientific explanation of consciousness. Yet, much harder questions remain. How and why do these neural mechanisms create the subjective feeling of being, the awareness of self and environment – the state of being conscious?

Notes about this consciousness research article

The study will be published in the 4 April 2012 issue of The Journal of Neuroscience.

The study was part of the “Neurophilosophy of Consciousness” project funded by the Academy of Finland (Research Programme on Neuroscience, project No. 8111818) trying to reveal neural correlates of consciousness by targeting different states and phenomena of consciousness. The study was also funded by Turku PET Centre and Turku University Hospital (EVO-grant No. 13323).