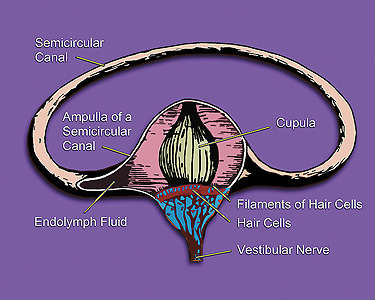 Researchers say the attacks can be caused by a combination of two factors: 1) a malformation of the inner ear, endolymphatic hydrops (the inner ear dilated with fluid) and 2) risk factors for vascular disease in the brain. The image is an illustration of one of the three semicircular canals of one inner ear and associated structures. Credited to the US Government.
Home
Featured

Researchers May Have Discovered a Plan to Disable Meniere’s Disease

Note: Please note that the research ideas discussed in this article are presented in a journal that features hypotheses rather than peer reviewed research. (Clarification requested from one of our respected Google+ readers. All critiques of articles and research are greatly appreciated. Thank you.)

Researchers at University of Colorado School of Medicine may have figured out what causes Meniere’s disease and how to attack it. According to Carol Foster, MD, from the department of otolaryngology and Robert Breeze, MD, a neurosurgeon, there is a strong association between Meniere’s disease and conditions involving temporary low blood flow in the brain such as migraine headaches.

Meniere’s affects approximately 3 to 5 million people in the United States. It is a disabling disorder resulting in repeated violent attacks of dizziness, ringing in the ear and hearing loss that can last for hours and can ultimately cause permanent deafness in the affected ear. Up until now, the cause of the attacks has been unknown, with no theory fully explaining the many symptoms and signs of the disorder.

“If our hypothesis is confirmed, treatment of vascular risk factors may allow control of symptoms and result in a decreased need for surgeries that destroy the balance function in order to control the spell” said Foster. “If attacks are controlled, the previously inevitable progression to severe hearing loss may be preventable in some cases.”

Foster explains that these attacks can be caused by a combination of two factors: 1) a malformation of the inner ear, endolymphatic hydrops (the inner ear dilated with fluid) and 2) risk factors for vascular disease in the brain, such as migraine, sleep apnea, smoking and atherosclerosis.

The researchers propose that a fluid buildup in part of the inner ear, which is strongly associated with Meniere attacks, indicates the presence of a pressure-regulation problem that acts to cause mild, intermittent decreases of blood flow within the ear. When this is combined with vascular diseases that also lower blood flow to the brain and ear, sudden loss of blood flow similar to transient ischemic attacks (or mini strokes) in the brain can be generated in the inner ear sensory tissues. In young people who have hydrops without vascular disorders, no attacks occur because blood flow continues in spite of these fluctuations. However, in people with vascular diseases, these fluctuations are sufficient to rob the ear of blood flow and the nutrients the blood provides. When the tissues that sense hearing and motion are starved of blood, they stop sending signals to the brain, which sets off the vertigo, tinnitus and hearing loss in the disorder.

Restoration of blood flow does not resolve the problem. Scientists believe it triggers a damaging after-effect called the ischemia-reperfusion pathway in the excitable tissues of the ear that silences the ear for several hours, resulting in the prolonged severe vertigo and hearing loss that is characteristic of the disorder. Although most of the tissues recover, each spell results in small areas of damage that over time results in permanent loss of both hearing and balance function in the ear.

Since the first linkage of endolymphatic hydrops and Meniere’s disease in 1938, a variety of mechanisms have been proposed to explain the attacks and the progressive deafness, but no answer has explained all aspects of the disorder, and no treatment based on these theories has proven capable of controlling the progression of the disease. This new theory, if proven, would provide many new avenues of treatment for this previously poorly-controlled disorder.

The article is available online at: “The Meniere attack: An ischemia/reperfusion disorder of inner ear sensory tissues”, Medical Hypotheses, December 2013.

Contact: Jackie Brinkman – University of Colorado Denver
Source: University of Colorado Denver press release
Image Source: The image is credited to the US Government and is in the public domain.
Original Research: Abstract for “The Meniere attack: An ischemia/reperfusion disorder of inner ear sensory tissues” by C.A. Foster and R.E. Breeze in Medical Hypotheses. Published online November 6 2013 doi:10.1016/j.mehy.2013.10.015