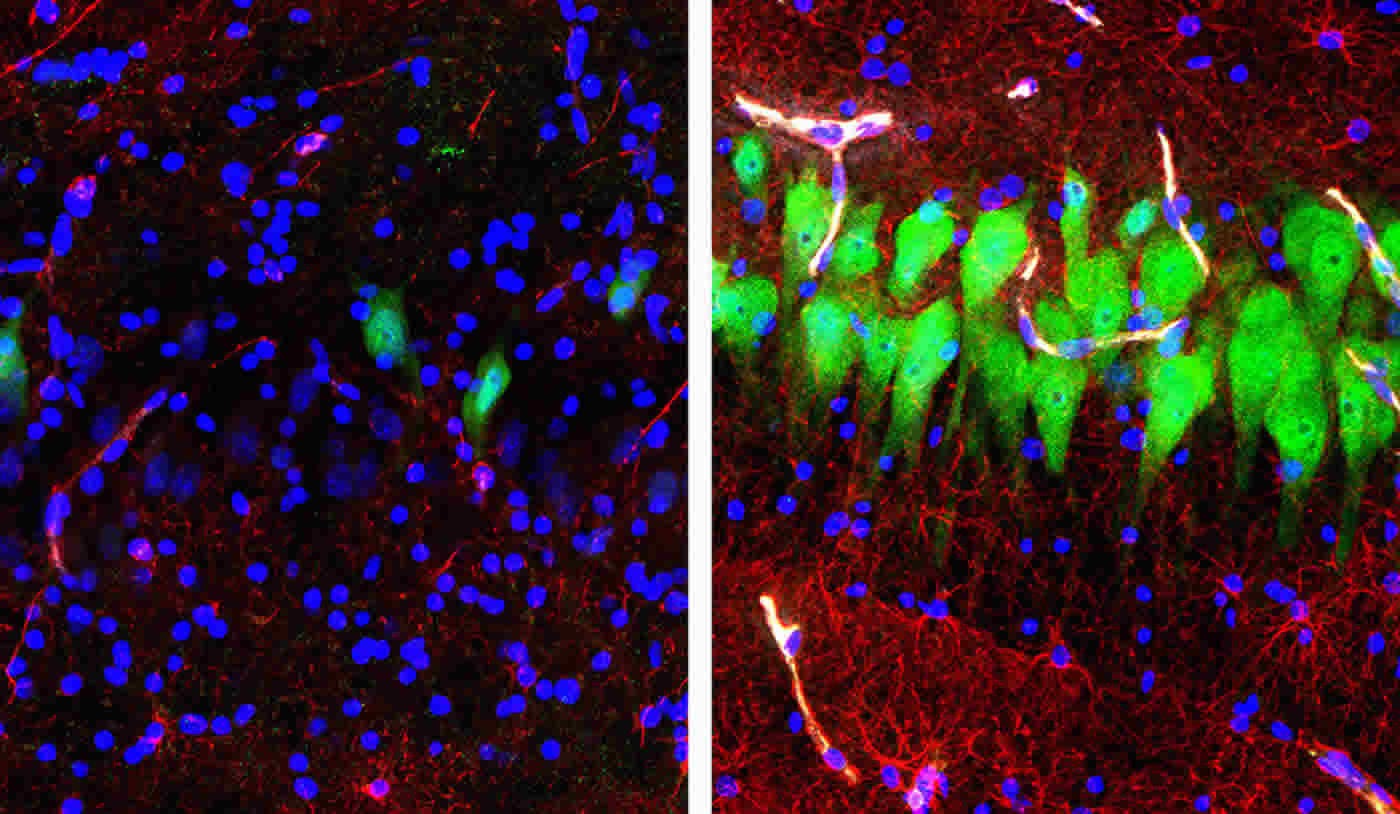 Immunofluorescent stains for neurons (NeuN; green), astrocytes (GFAP; red), and cell nuclei (DAPI, blue) in the hippocampal CA3 region of brains either unperfused for 10 hours after death (left) or subjected to perfusion with the BrainEx technology (right). After 10 hours postmortem, neurons and astrocytes normally undergo cellular disintegration unless salvaged by the BrainEx system. The image is credited to Stefano G. Daniele & Zvonimir Vrselja; Sestan Laboratory; Yale School of Medicine.

Summary: Yale researchers successfully restored cellular activity and circulation to a pig’s brain, four hours after its death. The research challenges the assumption about both timing and the irreversible nature of the cessation of some brain functions following death.

Circulation and cellular activity were restored in a pig’s brain four hours after its death, a finding that challenges long-held assumptions about the timing and irreversible nature of the cessation of some brain functions after death, Yale scientists report April 18 in the journal Nature.

The brain of a postmortem pig obtained from a meatpacking plant was isolated and circulated with a specially designed chemical solution. Many basic cellular functions, once thought to cease seconds or minutes after oxygen and blood flow cease, were observed, the scientists report.

“At no point did we observe the kind of organized electrical activity associated with perception, awareness, or consciousness,” said co-first author Zvonimir Vrselja, associate research scientist in neuroscience. “Clinically defined, this is not a living brain, but it is a cellularly active brain.”

Cellular death within the brain is usually considered to be a swift and irreversible process. Cut off from oxygen and blood supply, the brain’s electrical activity and signs of awareness disappear within seconds, while energy stores are depleted within minutes. Current understanding maintains that a cascade of injury and death molecules are then activated leading to widespread, irreversible degeneration.

However, researchers in Sestan’s lab, whose research focuses on brain development and evolution, observed that the small tissue samples they worked with routinely showed signs of cellular viability, even when the tissue was harvested multiple hours postmortem. Intrigued, they obtained the brains of pigs processed for food production to study how widespread this postmortem viability might be in the intact brain. Four hours after the pig’s death, they connected the vasculature of the brain to circulate a uniquely formulated solution they developed to preserve brain tissue, utilizing a system they call BrainEx. They found neural cell integrity was preserved, and certain neuronal, glial, and vascular cell functionality was restored.

The new system can help solve a vexing problem — the inability to apply certain techniques to study the structure and function of the intact large mammalian brain — which hinders rigorous investigations into topics like the roots of brain disorders, as well as neuronal connectivity in both healthy and abnormal conditions.

“Previously, we have only been able to study cells in the large mammalian brain under static or largely two-dimensional conditions utilizing small tissue samples outside of their native environment,” said co-first author Stefano G. Daniele, an M.D./Ph.D. candidate. “For the first time, we are able to investigate the large brain in three dimensions, which increases our ability to study complex cellular interactions and connectivity.”

While the advance has no immediate clinical application, the new research platform may one day be able to help doctors find ways to help salvage brain function in stroke patients, or test the efficacy of novel therapies targeting cellular recovery after injury, the authors say.

The research was primarily funded by the National Institutes of Health’s (NIH) BRAIN Initiative.

“This line of research holds hope for advancing understanding and treatment of brain disorders and could lead to a whole new way of studying the postmortem human brain,” said Andrea Beckel-Mitchener, chief of functional neurogenomics at the NIH’s National Institute of Mental Health, which co-funded the research.

The researchers said that it is unclear whether this approach can be applied to a recently deceased human brain. The chemical solution used lacks many of the components natively found in human blood, such as the immune system and other blood cells, which makes the experimental system significantly different from normal living conditions. However, the researcher stressed any future study involving human tissue or possible revival of global electrical activity in postmortem animal tissue should be done under strict ethical oversight.

“Restoration of consciousness was never a goal of this research,” said co-author Stephen Latham, director of Yale’s Interdisciplinary Center for Bioethics. “The researchers were prepared to intervene with the use of anesthetics and temperature-reduction to stop organized global electrical activity if it were to emerge. Everyone agreed in advance that experiments involving revived global activity couldn’t go forward without clear ethical standards and institutional oversight mechanisms.”

There is an ethical imperative to use tools developed by the Brain Initiative to unravel mysteries of brain injuries and disease, said Christine Grady, chief of the Department of Bioethics at the NIH Clinical Center.

“It’s also our duty to work with researchers to thoughtfully and proactively navigate any potential ethical issues they may encounter as they open new frontiers in brain science,” she said.

The brains of humans and other mammals are highly vulnerable to interruptions in blood flow and decreases in oxygen levels. Here we describe the restoration and maintenance of microcirculation and molecular and cellular functions of the intact pig brain under ex vivo normothermic conditions up to four hours post-mortem. We have developed an extracorporeal pulsatile-perfusion system and a haemoglobin-based, acellular, non-coagulative, echogenic, and cytoprotective perfusate that promotes recovery from anoxia, reduces reperfusion injury, prevents oedema, and metabolically supports the energy requirements of the brain. With this system, we observed preservation of cytoarchitecture; attenuation of cell death; and restoration of vascular dilatory and glial inflammatory responses, spontaneous synaptic activity, and active cerebral metabolism in the absence of global electrocorticographic activity. These findings demonstrate that under appropriate conditions the isolated, intact large mammalian brain possesses an underappreciated capacity for restoration of microcirculation and molecular and cellular activity after a prolonged post-mortem interval.