Orexin proteins, which are blamed for spontaneous daytime sleepiness, also play a crucial role in bone formation, according to findings by UT Southwestern Medical Center researchers. The findings could potentially give rise to new treatments for osteoporosis, the researchers say.

Orexins are a type of protein used by nerve cells to communicate with each other. Since their discovery at UT Southwestern more than 15 years ago, they have been found to regulate a number of behaviors, including arousal, appetite, reward, energy expenditure, and wakefulness. Orexin deficiency, for example, causes narcolepsy – spontaneous daytime sleepiness. Thus, orexin antagonists are promising treatments for insomnia, some of which have been tested in Phase III clinical trials.

UT Southwestern researchers, working with colleagues in Japan, now have found that mice lacking orexins also have very thin and fragile bones that break easily because they have fewer cells called osteoblasts, which are responsible for building bones.

“Osteoporosis is highly prevalent, especially among post-menopausal women. We are hoping that we might be able to take advantage of the already available orexin-targeting small molecules to potentially treat osteoporosis,” said Dr. Yihong Wan, Assistant Professor of Pharmacology, the Virginia Murchison Linthicum Scholar in Medical Research, and senior author for the study, published in the journal Cell Metabolism. 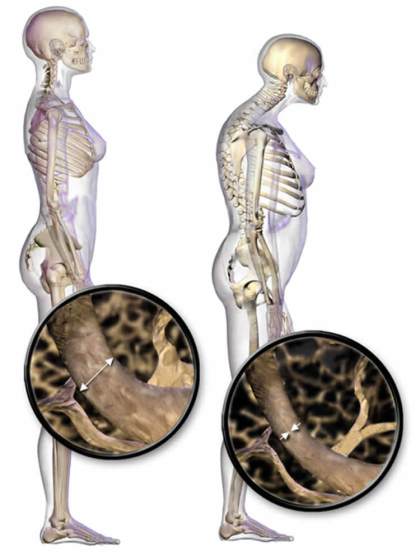 Osteoporosis, the most common type of bone disease in which bones become fragile and susceptible to fracture, affects more than 10 million Americans. Credit BruceBlaus.

Osteoporosis, the most common type of bone disease in which bones become fragile and susceptible to fracture, affects more than 10 million Americans. The disease, which disproportionately affects seniors and women, leads to more than 1.5 million fractures and some 40,000 deaths annually. In addition, the negative effects impact productivity, mental health, and quality of life. One in five people with hip fractures, for example, end up in nursing homes.

Orexins seem to play a dual role in the process: they both promote and block bone formation. On the bones themselves, orexins interact with another protein, orexin receptor 1 (OX1R), which decreases the levels of the hunger hormone ghrelin. This slows down the production of new osteoblasts and, therefore, blocks bone formation locally. At the same time, orexins interact with orexin receptor 2 (OX2R) in the brain. In this case, the interaction reduces the circulating levels of leptin, a hormone known to decrease bone mass, and thereby promotes bone formation. Therefore, osteoporosis prevention and treatment may be achieved by either inhibiting OX1R or activating OX2R.

The research was done in collaboration with Dr. Masashi Yanagisawa, Adjunct Professor of Molecular Genetics at UT Southwestern, a Howard Hughes Medical Institute investigator, and now with the International Institute for Integrative Sleep Medicine at the University of Tsukuba, in Japan. Dr. Yanagisawa’s laboratory discovered orexins in 1998.

The work was supported by the UT Southwestern Endowed Scholar Startup Fund, the National Institutes of Health, the Welch Foundation, the Howard Hughes Medical Institute, and the Japan Society for the Promotion of Science.