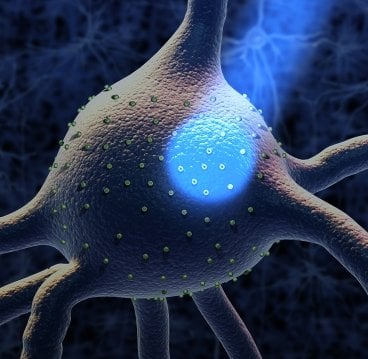 Credited to McGovern Institute for Brain Research and Sputnik Animation

Wake Forest Baptist Medical Center researchers are gaining a better understanding of the neurochemical basis of addiction with a new technology called optogenetics.

In neuroscience research, optogenetics is a newly developed technology that allows researchers to control the activity of specific populations of brain cells, or neurons, using light. And it’s all thanks to understanding how tiny green algae, that give pond scum its distinctive color, detect and use light to grow.

The technology enables researchers like Evgeny A. Budygin, Ph.D., assistant professor of neurobiology and anatomy at Wake Forest Baptist, to address critical questions regarding the role of dopamine in alcohol drinking-related behaviors, using a rodent model.

“With this technique, we’ve basically taken control of specific populations of dopamine cells, using light to make them respond – almost like flipping a light switch,” said Budygin. “These data provide us with concrete direction about what kind of patterns of dopamine cell activation might be most effective to target alcohol drinking.”

The latest study from Budygin and his team published online in last month’s journal Frontiers in Behavioral Neuroscience. Co-author Jeffrey L. Weiner, Ph.D., professor of physiology and pharmacology at Wake Forest Baptist, said one of the biggest challenges in neuroscience has been to control the activity of brain cells in the same way that the brain actually controls them. With optogenetics, neuroscientists can turn specific neurons on or off at will, proving that those neurons actually govern specific behaviors.

“We have known for many years what areas of the brain are involved in the development of addiction and which neurotransmitters are essential for this process,” Weiner said. “We need to know the causal relationship between neurochemical changes in the brain and addictive behaviors, and optogenetics is making that possible now.”

The researchers used cutting-edge molecular techniques to express the light-responsive channelrhodopsin protein in a specific population of dopamine cells in the brain-reward system of rodents. They then implanted tiny optical fibers into this brain region and were able to control the activity of these dopamine cells by flashing a blue laser on them.

“You can place an electrode in the brain and apply an electrical current to mimic the way brain cells get excited, but when you do that you’re activating all the cells in that area,” Weiner said. “With optogenetics, we were able to selectively control a specific population of dopamine cells in a part of the brain-reward system. Using this technique, we discovered distinct patterns of dopamine cell activation that seemed to be able to disrupt the alcohol-drinking behavior of the rats.”

Budygin agreed and said this kind of project wouldn’t be possible without cross campus collaboration between neurobiology and anatomy, physiology and pharmacology and physics. “Now we are taking the first steps in this direction,” he said. “It was impossible before the optogenetic era.”

Notes about this optogenetics and addiction research