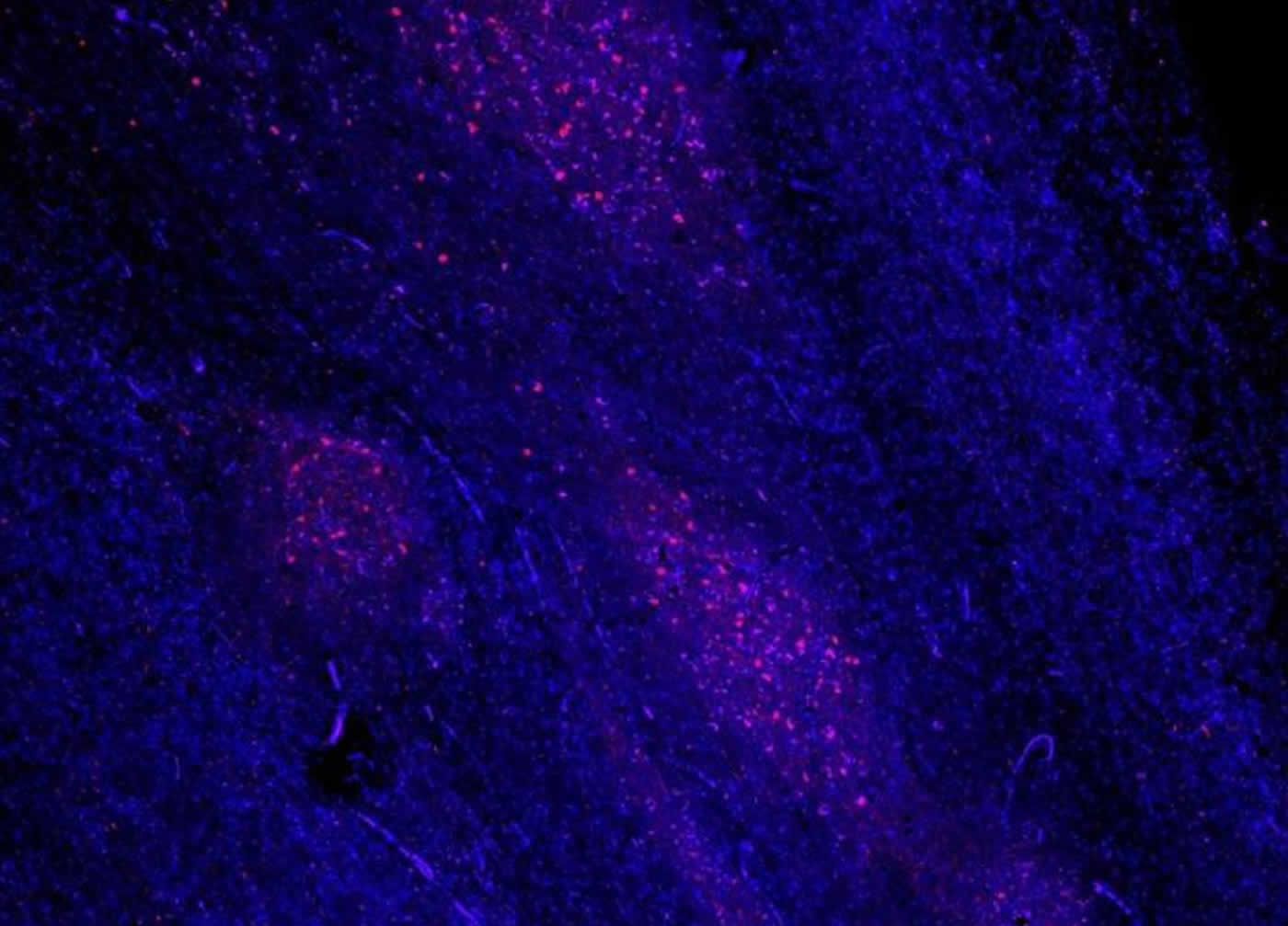 Summary: Max Planck researchers have made a groundbreaking discovery that helps explain why people with Parkinson’s often report an impaired sense of smell. They discovered the total volume of glomeruli in the olfactory bulb of Parkinson’s patients is only half of that found in people without the disease.

The first symptom of Parkinson’s disease is often an impaired sense of smell. This neurodegenerative disease primarily causes irreparable damage to nerve cells in a brain area involved in movement control. How it affects the olfactory system has been unclear. Researchers at the Max Planck Research Unit for Neurogenetics in Frankfurt and the University of Auckland in New Zealand have now carried out a study comparing the olfactory bulbs of individuals with and without Parkinson’s disease. The researchers found that the total volume occupied by the functional units in the olfactory bulb – the so-called glomeruli – is in Parkinson’s cases only half that in normal individuals. Moreover, the distribution of the glomeruli within the olfactory bulb is altered in Parkinson’s cases.

Nine out of ten patients with Parkinson’s disease suffer from defects of the sense of smell in the early stages of the disease – often years before the appearance of the motor symptoms that are characteristic of the disease. The motor symptoms are caused by a loss of nerve cells in the region of the substantia nigra in the brain that is responsible for controlling movement. What causes this cell death has not yet been fully clarified, but a key role appears to be played by Lewy bodies. These are inclusions, inside the cells, that contain a misfolded, defective version of the alpha-synuclein protein. Lewy bodies are found in the olfactory bulb before they appear in the substantia nigra.

The so-called olfactory vector hypothesis for Parkinson’s disease proposes that environmental factors, such as viruses, heavy metals or pesticides, are risk factors or even causes of the condition. No other sensory system than the olfactory system is in such close contact with the external environment – the inhaled air. The hypothesis posits that the disease-causing agent is introduced from the nasal cavity into the olfactory bulb, where Parkinson’s disease is triggered and gradually spreads through other parts of the brain.

The human olfactory bulb remains poorly studied. Research on this brain structure depends critically on the availability of pristine samples, which are typically procured post mortem, from brain donors. The Neurological Foundation of New Zealand Douglas Human Brain Bank in Auckland, New Zealand works closely with families of patients suffering from neurodegenerative diseases to ensure ethical and effective collection of post mortem brain samples from diseased and non-diseased cases. The precarious location of the olfactory bulb below the bulk of the brain and the many axons that connect it to the olfactory mucosa mean that special efforts must be made to protect the morphology of the olfactory bulb when collecting the samples. 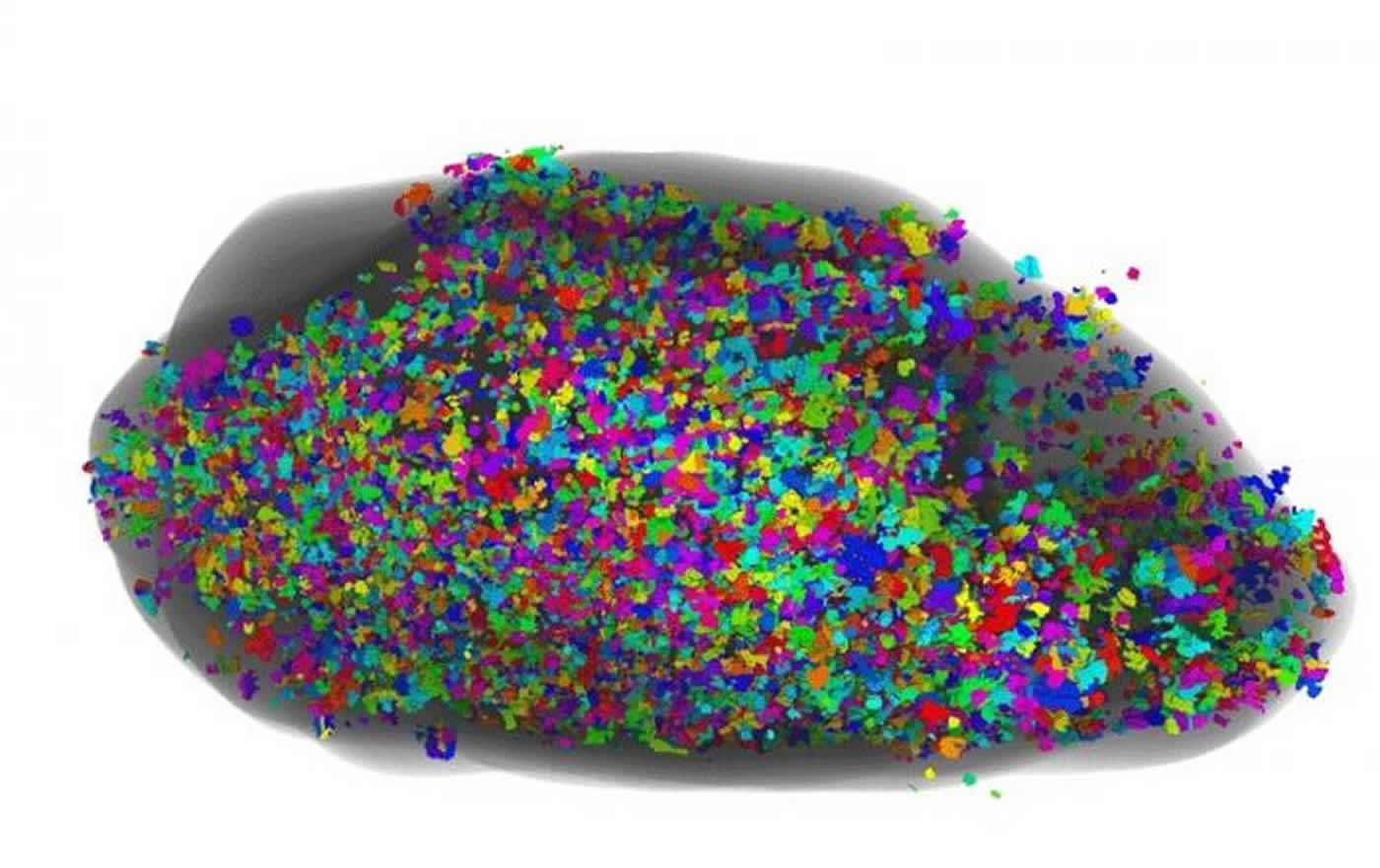 This is a ventral view of glomeruli in a human olfactory bulb. Single glomeruli are represented in confetti-like colours. Credit: Max Planck Research Unit for Neurogenetics.

The New Zealand-based researchers were able to collect olfactory bulbs fit for an in-depth quantitative study. In a globe-spanning project, the researchers processed the post mortem olfactory bulbs chemically, cut ten-micrometer thin sections throughout its entire length, and stained the sections with fluorescently labeled antibodies. The labeled sections were then scanned in Frankfurt, and the images reconstructed in 3D allowing for quantitative whole-olfactory bulb analyses.

As glomeruli of the human olfactory bulb are difficult to count unambiguously, the researchers came up with a new, quantitative parameter: the global glomerular voxel volume. This quantity is the sum of the volume of all glomeruli. These are formed by the coalescence of axons of olfactory sensory neurons making synapses with olfactory bulb neurons. Having defined this new parameter, the researchers compared the values between olfactory bulbs from normal and Parkinson’s disease cases, and found that it was reduced by more than half. Whether the decrease is the result of Parkinson’s disease cases having fewer or smaller glomeruli, or is due to a combination of these two effects, remains to be seen.

Lewy bodies and Lewy neurites are filled with misfolded alpha-synuclein and are hallmark pathologies of brain tissue in Parkinson’s disease. The nuclei of olfactory bulb cells are visualized with a blue-fluorescent dye. The abnormal alpha-synuclein is visualized in red fluorescence by staining with a specific antibody. NeuroscienceNews.com image is credited to Max Planck Research Unit for Neurogenetics.