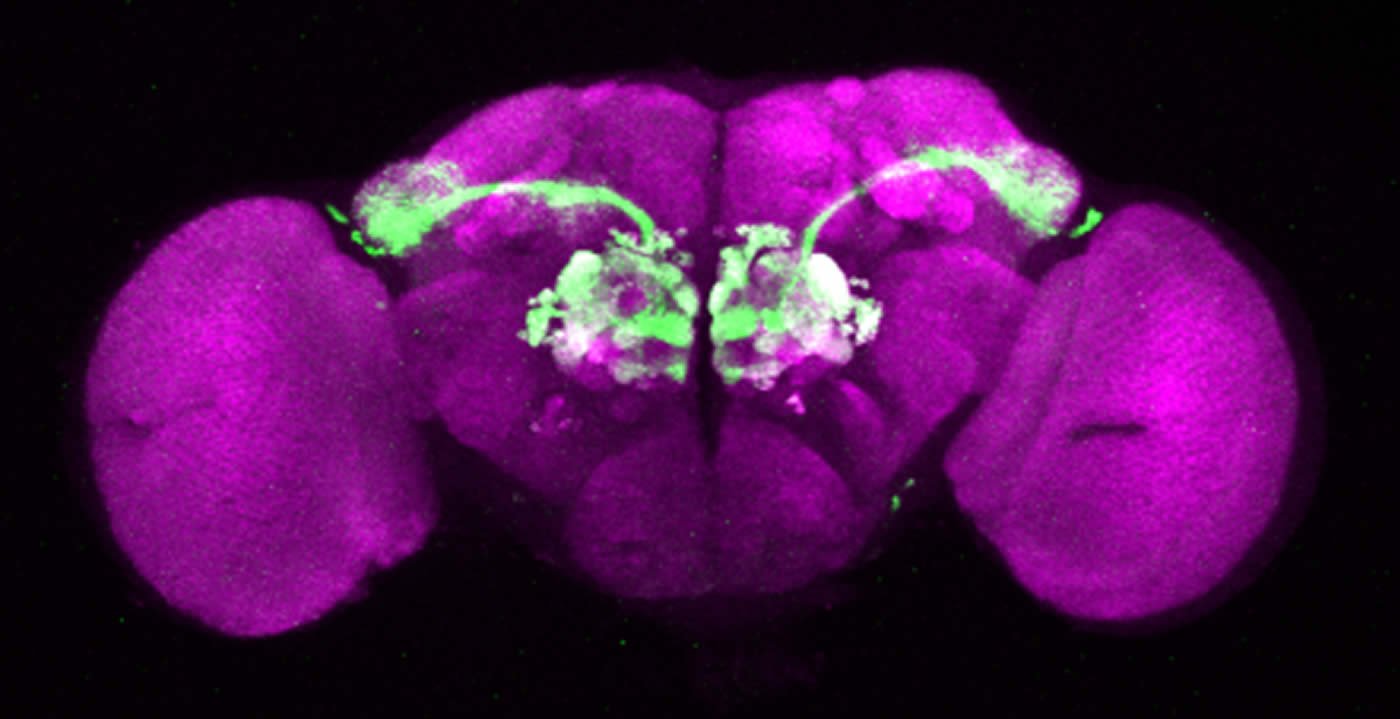 An image of a brain in which output neurons in glomeruli are labeled with green fluorescence proteins. NeuroscienceNews.com image is credited to RIKEN.

Stinky or Fragrant? How Reactions to Odor Change in Presence of Others: Fly Study

Summary: A new study reveals preference of odors can flip, depending on the situation.

Pleasant and unpleasant odors are a part of everyone’s life, but how do our reactions to smells change when other odors are present? To answer this question, researchers at the RIKEN Brain Science Institute in Japan have combined experimental and modeling approaches to reveal the process through which smell preference is computed in the brain. Published in Neuron, the work shows how the activity of neurons in the olfactory processing center of the Drosophila brain can be decoded to predict behavioral responses to odors, and reveals that the relative preference of odors can flip depending on the situation.

For many animals, the sense of smell—the ability to detect and interpret chemicals in the environment—is fundamental to survival. From insects to mammals, olfaction is central to a range of behaviors, including foraging, habitat and prey location, predator avoidance, and social communication. While responding appropriately to odors requires the ability to distinguish those that are harmful from those that are beneficial, how this is achieved in the brain is an open question.

When an odor is smelled, it activates a population of small neuronal structures called glomeruli in the first olfactory center of the brain. While odor information is generally recognized to be encoded as patterns of glomerular activity across space and time, the sheer number of glomeruli—about 1,800 in mice and 5,500 in humans—is a major impediment to olfactory research.

To overcome this obstacle, Hokto Kazama and his team took advantage of the simpler olfactory system in the fruit fly Drosophila melanogaster, which is similar in function and organization to that of mammals, but contains only about 50 glomeruli. Explains Kazama, “Because of the limited number of glomeruli, we were able to use two-photon calcium imaging technology to systematically record odor-evoked activity from almost all fly glomeruli in response to a large number of odorants.”

Fly behavior was monitored in a clever flight-simulator arena. In this virtual reality system, the fly’s head is fixed and surrounded by an olfactory and visual landscape that is rotated in real-time in response to wing movements. The flies displayed a continuum of responses ranging from strong attraction to strong aversion—virtually flying into or away from the odor—and their judgments were made extremely quickly, sometimes in as short as 200 milliseconds.

By analyzing these behavioral and physiological data, researchers formulated a mathematical model that explains how attraction and repulsion to odorants can be computed from the activity of olfactory glomeruli. Their model suggests that each glomerulus contributes to attraction or aversion with a specific weight. Summing the transformed and weighted activity of all glomeruli not only matched the real behavioral responses to the odors used to make the model, but also accurately predicted responses to new odorants. Kazama notes that contrary to the prevalent hypothesis in the field, the results imply that this computation does not rely on a small subset of glomeruli, but likely requires most, if not all, of them.

The model also predicted that the relative preference of odors would vary, and could even switch, depending on the nature of other odorants present in the environment. The team performed a series of experiments in which the same odors were presented under different conditions, and successfully verified this prediction. Adds Kazama, “Not only does this demonstrate that even flies have the ability to adapt to their olfactory environment, it exemplifies the usefulness of our approach that combines physiological measurements with mathematical modeling of behavior and neural activity.”

A fruit fly (Drosophila) flies while tethered in an experimental setup in Hokto Kazama’s lab. The visual stimulus (the green LED stripes) move as the fly changes direction. Flies are exposed to various pleasant and unpleasant odors and their flight trajectories and brain activity are recorded. The goal is to understand how neurons in the antennal lobe of flies encode different smells and to be able to model and predict flies’ smell preferences based on the neural activity. Video by Tomoko Nishiyama at the RIKEN Brain Science Institute.

Because the basic function and wiring of the olfactory system are well conserved from flies to humans, the study is expected to provide a deeper understanding of the principles and mechanisms of olfactory processing in the human brain.

Summary
Odor information is encoded in the activity of a population of glomeruli in the primary olfactory center. However, how this information is decoded in the brain remains elusive. Here, we address this question in Drosophila by combining neuronal imaging and tracking of innate behavioral responses. We find that the behavior is accurately predicted by a model summing normalized glomerular responses, in which each glomerulus contributes a specific, small amount to odor preference. This model is further supported by targeted manipulations of glomerular input, which biased the behavior. Additionally, we observe that relative odor preference changes and can even switch depending on the context, an effect correctly predicted by our normalization model. Our results indicate that olfactory information is decoded from the pooled activity of a glomerular repertoire and demonstrate the ability of the olfactory system to adapt to the statistics of its environment.