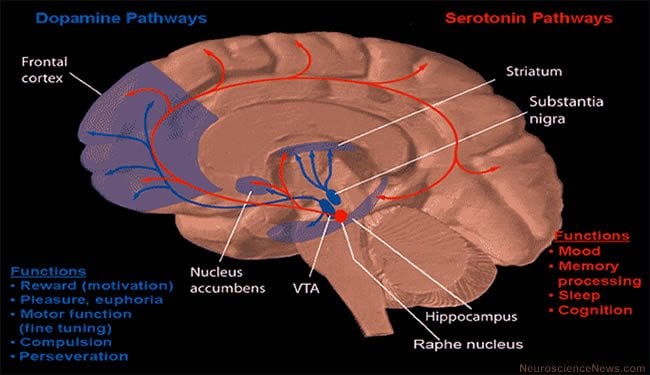 Researchers discovered cocaine causes cells within the nucleus accumbens to boost the production of two proteins, calcium/calmodulin-dependent protein kinase II (CaMKIIα)and transcription factor ΔFosB. These proteins are associated with learning and addiction. The proteins increase one another's production and stability in cells. The brain image shows the serotonin and dopamine pathways with the nucleus accumbens highlighted.
Home
Featured

Scientists have discovered a molecular process in the brain triggered by cocaine use that could provide a target for treatments to prevent or reverse addiction to the drug.

Reporting in the Journal of Neuroscience, Michigan State University neuroscientist A.J. Robison and colleagues say cocaine alters the nucleus accumbens, the brain’s pleasure center that responds to stimuli such as food, sex and drugs.

“Understanding what happens molecularly to this brain region during long-term exposure to drugs might give us insight into how addiction occurs,” said Robison, assistant professor in the Department of Physiology and the Neuroscience Program.

The researchers found that cocaine causes cells in the nucleus accumbens to boost production of two proteins, one associated with addiction and the other related to learning. The proteins have a reciprocal relationship – they increase each other’s production and stability in the cells – so the result is a snowball effect that Robison calls a feed-forward loop.

Robison and colleagues demonstrated that loop’s essential role in cocaine responses by manipulating the process in rodents. They found that raising production of the protein linked to addiction made animals behave as if they were exposed to cocaine even when they weren’t. They also were able to break the loop, disrupting rodents’ response to cocaine by preventing the function of the learning protein.

“At every level that we study, interrupting this loop disrupts the process that seems to occur with long-term exposure to drugs,” said Robison, who conducted the study as a postdoctoral fellow at Mount Sinai School of Medicine in New York City before joining the faculty at MSU.

Robison said the study was particularly compelling because it found signs of the same feed-forward loop in the brains of people who died while addicted to cocaine.

“The increased production of these proteins that we found in the animals exposed to drugs was exactly paralleled in a population of human cocaine addicts,” he said. “That makes us believe that the further experiments and manipulations we did in the animals are directly relevant to humans.”

A Previously Unknown Ability of the Autonomic Nervous System

Robison said the growing understanding of addiction at the molecular level could help pave the way for new treatments for addicts.

“This sort of molecular pathway could be interrupted using genetic medicine, which is what we did with the mice,” he said. “Many researchers think that is the future of medicine.”