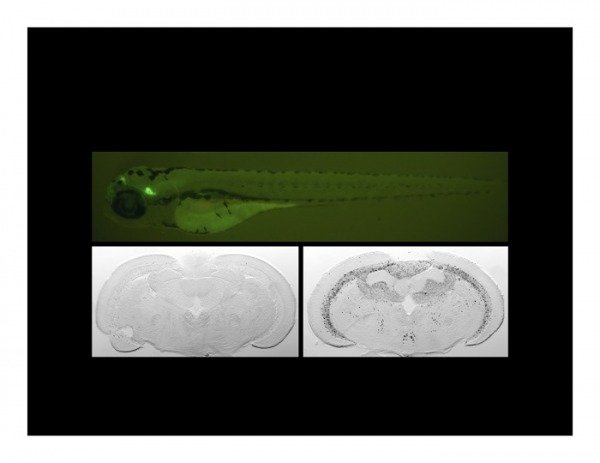 Upper panel shows fluorescently labeled neural projections in a larval zebrafish from the habenular nuclei in the forebrain to the interpeduncular nucleus in the midbrain, a pathway known to be involved in nicotine addiction. The lower panels demonstrate neural activity (black cells) in cross sections of brains following exposure of adult zebrafish to control water (left) or to water containing nicotine (right). Credit Courtney Akitake and Elim Hong.
Home
Electrophysiology

In researching neural pathways, it helps to establish an analogous relationship between a region of the human brain and the brains of more-easily studied animal species. New work from a team led by Carnegie’s Marnie Halpern hones in on one particular region of the zebrafish brain that could help us understand the circuitry underlying nicotine addiction. It is published the week of December 9 by Proceedings of the National Academy of Sciences.

The mammalian habenular nuclei, in a little-understood and difficult-to-access part of the brain, are involved in regulating both dopamine and serotonin, two neurotransmitters involved in motor control, mood, learning, and addiction. But unlike the mammalian habenulae, the habenular nuclei of fish are located dorsally, making them easy for scientists to access and study. However, some outstanding questions remained about the properties of the zebrafish habenulae, creating a roadblock for truly linking these structures as analogous in fish and humans. In particular, it was unresolved whether zebrafish habenular neurons produce the neurotransmitter acetylcholine, which is enriched in this region of the mammalian brain and activates the same receptors to which nicotine is known to bind.

The new work by lead author Elim Hong and colleagues confirms that the pathway between the habenula and another part of the brain called the midbrain interpenduncular nucleus utilizes acetylcholine in zebrafish, as it does in humans. The work also shows that there is a left-right difference in this part of the fish brain.

The purpose of this asymmetry is unknown, but, as demonstrated by electrophysiological recordings with collaborator Jean-Marie Mangin of the University of Pierre and Marie Curie, it results in differences in neural activity between the brain hemispheres. Other research in Halpern’s lab indicates that such left-right differences could influence behavior. Hong performed these experiments through a European Molecular Biology Organization Short-Term Fellowship while hosted in the laboratory of Claire Wyart in Paris, France.

The team further showed that this acetylcholine pathway in zebrafish responds in a similar way to nicotine as does the analagous pathway in the mammalian brain. This makes the zebrafish a good model for studying the brain chemistry of nicotine addiction.

“Our work demonstrates broader uses for zebrafish in studying the function of the habenula and addresses a major weakness in the field, which was the poor characterization of neurotransmitter identity in this area,” said Hong. “Going forward, these results will help us study how brain circuitry influences nicotine addiction.”

In addition to Halpern and Hong, Courtney Akitake, Kirankumar Santhakumar and Sang Jung Ahn, formerly of Carnegie, are also co-authors on the study.