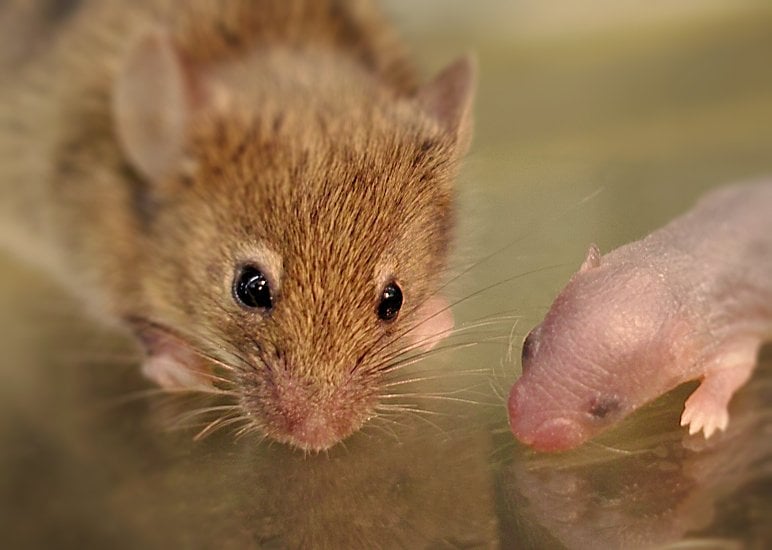 A mouse pup learns to use its whiskers to sense objects at about the second week of life. The nerve connections that enable this activity are helping researchers at Duke Medicine learn how human brains develop and function. Image provided by Duke Health.
Home
Featured

All parents know the infant milestones: turning over, learning to crawl, standing, and taking that first unassisted step. Achieving each accomplishment presumably requires the formation of new connections among subsets of the billions of nerve cells in the infant’s brain. But how, when and where those connections form has been a mystery.

Now researchers at Duke Medicine have begun to find answers. In a study reported Jan. 23, 2013, in the scientific journal Neuron, the research team describes the entire network of brain cells that are connected to specific motor neurons controlling whisker muscles in newborn mice.

A better understanding of such motor control circuits could help inform how human brains develop, potentially leading to new ways of restoring movement in people who suffer paralysis from brain injuries, or to the development of better prosthetics for limb replacement.

“Whiskers to mice are like fingers to humans, in that both are moving touch sensors,” said lead investigator Fan Wang, PhD, associate professor of cell biology and member of the Duke Institute for Brain Sciences. “Understanding how the mouse’s brain controls whisker movements may tell us about neural control of finger movements in people.”

Mice are active at night, so they rely heavily on whiskers to detect and discriminate objects in the dark, brushing their whiskers against objects in a rhythmic back-and-forth sweeping pattern referred to as “whisking”. But this whisking behavior does not appear until about two weeks after birth, when young mice start to explore the world outside their nest.

To learn how motor control of whiskers takes place, Wang and postdoctoral fellow Jun Takatoh used a new technique that takes advantage of the rabies virus’ ability to spread through connected nerve cells. A disabled form of the virus used to vaccinate pets was created with the ability to express a fluorescent protein. The researchers were able to trace its path through a network of brain cells directly connected to the motor neurons controlling whisker movement.

“The precision of this mapping method allowed us to ask a key question, namely are parts of the whisker motor control circuitry not yet connected in newborn mice, and are such missing links added later to enable whisking?” Wang said.

By taking a series of pictures in the fluorescently labeled brains during the first two weeks after birth, the research team chronicled the developing circuits before and after mice start whisking.

“When we traced the circuit it was stunning in the sense that we didn’t realize there are so many pools of neurons located throughout the brainstem that are connected to whisker motor neurons,” said Wang. “It’s remarkable that a single motor neuron receives so many inputs, and somehow is able to integrate them.”

At the same time whisking movements emerge, motor neurons receive a new set of inputs from a region of the brainstem called the LPGi. A single LPGi neuron is connected to motor neurons on both sides of the face, putting them in perfect position to synchronize the movements of left and right whiskers.

To learn more about the new circuit formed between LPGi and motor neurons, Wang and Takatoh drew on the expertise of Duke colleague Richard Mooney, PhD, professor of neurobiology, and his student Anders Nelson. Together, the researchers were able to record the labeled neurons and found the LPGi neurons communicate with motor neurons using glutamate, the main neurotransmitter that stimulates the brain. They further discovered that LPGi neurons receive direct inputs from the motor cortex.

“This makes sense because exploratory whisking is a voluntary movement under control of the motor cortex,” Wang said. “Excitatory input is needed for initiating such movements, and LPGi may be critical for relaying signals from the motor cortex to whisker motor neurons.”

The researchers will next explore the connectivity by using genetic, viral and optical tools to see what happens when certain components of the circuits are activated or silenced during various motor tasks.

In addition to Wang, Takatoh, Mooney and Nelson at Duke, study authors include Xiang Zhou of the University of Chicago; Michael D. Ehlers of Pfizer Inc. R&D M. McLean Bolton of the Max Planck Institute; and Benjamin R. Arenkiel of Baylor College of Medicine.

The research was supported by grants from the National Institutes of Health (DA028302, DE19440, NS079929) and by the Duke Institute for Brain Sciences.