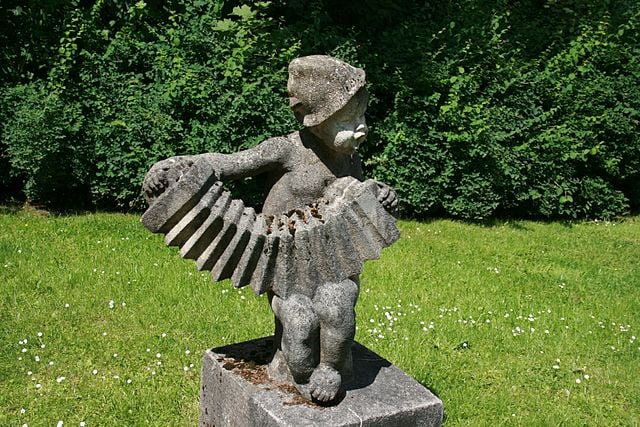 The five-year research project will offer researchers an important opportunity to provide new insights and add rigorous data to an emerging discussion about the role of early music engagement in learning and brain function. Image info in notes below.
Home
Featured

Researchers at USC Brain and Creativity Institute will explore the effects of intense music training on cognitive development in LA Phil’s YOLA at HOLA program.

The Los Angeles Philharmonic Association, the USC Brain and Creativity Institute and Heart of Los Angeles (HOLA) are delighted to announce a longitudinal research collaboration to investigate the emotional, social and cognitive effects of musical training on childhood brain development.

The five-year research project, Effects of Early Childhood Musical Training on Brain and Cognitive Development, will offer USC researchers an important opportunity to provide new insights and add rigorous data to an emerging discussion about the role of early music engagement in learning and brain function.

Through a collaboration with the Youth Orchestra Los Angeles at Heart of Los Angeles (YOLA at HOLA) program, a partnership between the LA Phil and HOLA which provides free instruments and musical training to children from the Rampart District of Los Angeles, researchers with the USC Brain and Creativity Institute — led by acclaimed neuroscientists Hanna Damasio and Antonio Damasio — will track how children respond to music from the very onset of their exposure to systematic, high intensity music education.

Starting when the children are between the age of 6 and 7, to ages 11 and 12, the researchers will use standard psychological assessments and advanced brain imaging techniques to track brain, emotional and social development. The group of children involved in the YOLA at HOLA program will be compared to a control group of children matched in age, socio-economic status and cognitive abilities, but with no musical training.

All children will be followed for five consecutive years, providing a rare chance for researchers to discover the effects of musical training on emotional, social and cognitive aspects of development as they actually occur, rather than inferring later-life effects. The USC Brain and Creativity Institute team began working with YOLA at HOLA students in September 2012.

USC University Professors Hanna and Antonio Damasio, directors of the USC Brain and Creativity Institute and the Dornsife Neuroimaging Institute at USC, and professors of psychology and neurology in the USC Dornsife College of Letters, Arts and Sciences, will supervise the study. Dr. Assal Habibi of the USC Brain and Creativity Institute, herself a musician and a neuroscientist, and Dr. Beatriz Ilari of the USC Thornton School of Music, a musician and music educator, along with graduate students and research assistants, will work directly with YOLA children and their families, and collect data for the assessments. Research results and summaries of findings will be reported to the scientific community and will be made available to the public.

Notes about this music and child brain development research