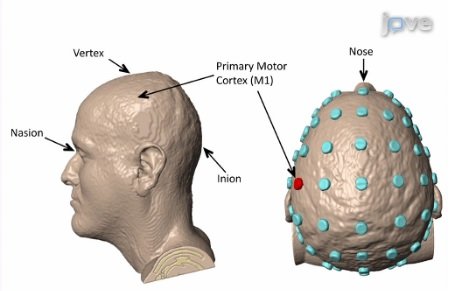 Researchers control the current by a portable device, which they hope physicians can eventually use in the clinic as a noninvasive treatment for chronic pain patients. Image adapted from the JoVE video/University of Michigan.
Home
Featured

Imagine significantly reducing a persistent migraine or fibromyalgia by a visit to a doctor who delivers low doses of electricity to the brain.

Alex DaSilva, assistant professor of prosthodontics at the University of Michigan, and colleagues are optimizing the next generation for such a technique, called high-definition transcranial direct current stimulation, or HD-tDCS.

The researchers have published several studies with the conventional tDCS, which also treats pain by “shocking” the brain with low doses of electrical current delivered noninvasively through electrodes placed on the scalp. The current modulates targeted areas of the brain, and one of the mechanisms is by activating the release of opioid-like painkillers.

HD-tDCS delivers an even more precisely focused current to the targeted areas of the brain. Preliminary reports have shown better pain relief in patients and a longer and more pronounced effect on the brain, said DaSilva, who heads the Headache and Orofacial Pain Effort Laboratory at the U-M School of Dentistry.

The increased precision of HD-tDCS means researchers can custom-place the electrodes to the skull. In this way, they can modulate specific areas in the brain to treat a wider range of conditions, such as neuropathic pain and stroke. Other uses include neurophysiological studies and cognitive and behavioral assessments.

One 20-minute session of HD-tDCS significantly reduced overall pain perception in fibromyalgia patients as described in one of the studies.

Researchers control the current by a portable device, which they hope physicians can eventually use in the clinic as a noninvasive treatment for chronic pain patients.

“We are working hard to make the technology available for clinical use at U-M,” DaSilva said. “Our lab is getting a good number of emails from chronic pain patients looking for treatment.”

The conventional technology is already available for many companies, and the HD-tDCS is being patented by the company of one of the developers.

To allow broad access and further investigation of the HD-tDCS technology by other researchers, DaSilva and colleagues released a scientific video demonstrating the step-by-step guideline of the research protocol.