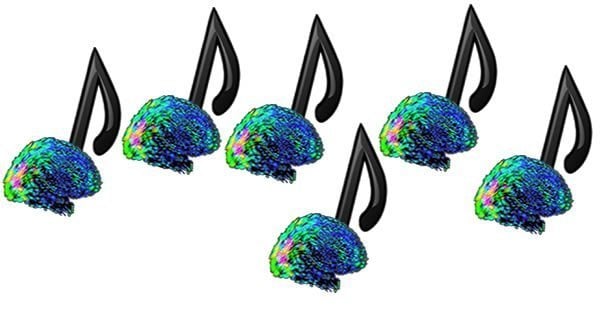 Researchers discovered the more experience study participants had practicing music when young, the faster their brains responded to speech sounds later in life. The image is adapted from an NIH image.

Neuroscience of Music – How Music Enhances Learning Through Neuroplasticity

Neuroscience research into the neuroscience of music shows that musicians’ brains may be primed to distinguish meaningful sensory information from noise. This ability seems to enhance other cognitive abilities such as learning, language, memory and neuroplasticity of various brain areas.

Those ubiquitous wires connecting listeners to you-name-the-sounds from invisible MP3 players, whether of Bach, Miles Davis or, more likely today, Lady Gaga, only hint at music’s effect on the soul throughout the ages.

Now a data-driven review by Northwestern University researchers that will be published July 20 in Nature Reviews Neuroscience pulls together converging research from the scientific literature linking musical training to learning that spills over to skills including language, speech, memory, attention and even vocal emotion. The science covered comes from labs all over the world, from scientists of varying scientific philosophies, using a wide range of research methods.

The explosion of research in recent years focusing on the effects of music training on the nervous system, including the studies in the review, have strong implications for education, said Nina Kraus, lead author of the Nature perspective, the Hugh Knowles Professor of Communication Sciences and Neurobiology and director of Northwestern’s Auditory Neuroscience Laboratory. Brain Volts

Scientists use the term neuroplasticity to describe the brain’s ability to adapt and change as a result of training and experience over the course of a person’s life. The studies covered in the Northwestern review offer a model of neuroplasticity, Kraus said. The research strongly suggests that the neural connections made during musical training also prime the brain for other aspects of human communication.

An active engagement with musical sounds not only enhances neuroplasticity, she said, but also enables the nervous system to provide the stable scaffolding of meaningful patterns so important to learning.

“The brain is unable to process all of the available sensory information from second to second, and thus must selectively enhance what is relevant,” Kraus said. Playing an instrument primes the brain to choose what is relevant in a complex process that may involve reading or remembering a score, timing issues and coordination with other musicians.

“A musician’s brain selectively enhances information-bearing elements in sound,” Kraus said. “In a beautiful interrelationship between sensory and cognitive processes, the nervous system makes associations between complex sounds and what they mean.” The efficient sound-to-meaning connections are important not only for music but for other aspects of communication, she said.

The Nature article reviews literature showing, for example, that musicians are more successful than non-musicians in learning to incorporate sound patterns for a new language into words. Children who are musically trained show stronger neural activation to pitch changes in speech and have a better vocabulary and reading ability than children who did not receive music training.

And musicians trained to hear sounds embedded in a rich network of melodies and harmonies are primed to understand speech in a noisy background. They exhibit both enhanced cognitive and sensory abilities that give them a distinct advantage for processing speech in challenging listening environments compared with non-musicians.

Children with learning disorders are particularly vulnerable to the deleterious effects of background noise, according to the article. “Music training seems to strengthen the same neural processes that often are deficient in individuals with developmental dyslexia or who have difficulty hearing speech in noise.”

Does a Sibling’s Gender Influence Our Own Personality?

Currently what is known about the benefits of music training on sensory processing beyond that involved in musical performance is largely derived from studying those who are fortunate enough to afford such training, Kraus said.

The research review, the Northwestern researchers conclude, argues for serious investing of resources in music training in schools accompanied with rigorous examinations of the effects of such instruction on listening, learning, memory, attention and literacy skills.

“The effect of music training suggests that, akin to physical exercise and its impact on body fitness, music is a resource that tones the brain for auditory fitness and thus requires society to re-examine the role of music in shaping individual development, ” the researchers conclude.

“Music training for the development of auditory skills,” by Nina Kraus and Bharath Chandrasekaran, will be published July 20 in the journal Nature Reviews Neuroscience.