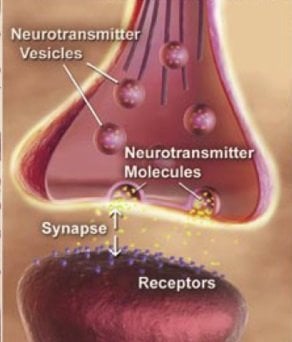 Researchers believe AGAP3 could be a critical to controlling the strength of synapses. The protein can act as a switch which either increases or decreases memory building activity in brain cells, depending upon the signal it detects. This image shows a synapse.
Home
Featured

Researchers at Johns Hopkins have uncovered a protein switch that can either increase or decrease memory-building activity in brain cells, depending on the signals it detects. Its dual role means the protein is key to understanding the complex network of signals that shapes our brain’s circuitry, the researchers say. A description of their discovery appears in the July 31 issue of the Journal of Neuroscience.

“What’s interesting about this protein, AGAP3, is that it is effectively double-sided: One side beefs up synapses in response to brain activity, while the other side helps bring synapse-building back down to the brain’s resting state,” says Richard Huganir, Ph.D., a professor and director of the Solomon H. Snyder Department of Neuroscience at the Johns Hopkins University School of Medicine and co-director of the Brain Science Institute at Johns Hopkins. “The fact that it links these two opposing activities indicates AGAP3 may turn out to be central to controlling the strength of synapses.”

Huganir has long studied how connections between brain cells, known as synapses, are strengthened and weakened to form or erase memories. The new discovery came about when he and postdoctoral fellow Yuko Oku, Ph.D., investigated the chain reaction of signals involved in one type of synaptic strengthening.

In a study of the proteins that interact with one of the known proteins from that chain reaction, the previously unknown AGAP3 turned up. It contained not only a site designed to bind another protein involved in the chain reaction that leads from brain stimulation to learning, but also a second site involved in bringing synapse-building activity down to normal levels after a burst of activity.

Although it might seem the two different functions are behaving at cross-purposes, Oku says, it also could be that nature’s bundling of these functions together in a single protein is an elegant way of enabling learning and memory while preventing dangerous overstimulation. More research is needed, Oku says, to figure out whether AGAP3’s two sites coordinate by affecting each other’s activity, or are effectively free agents.

This study was funded by Howard Hughes Medical Institute and the National Institute of Neurological Disorders and Stroke (grant number R01 NS036715).

Under a licensing agreement between Millipore Corporation and The Johns Hopkins University, Rick Huganir is entitled to a share of royalties received by the university on sales of products described in this article. Huganir is a paid consultant to Millipore Corporation. The terms of this arrangement are being managed by The Johns Hopkins University in accordance with its conflict of interest policies.