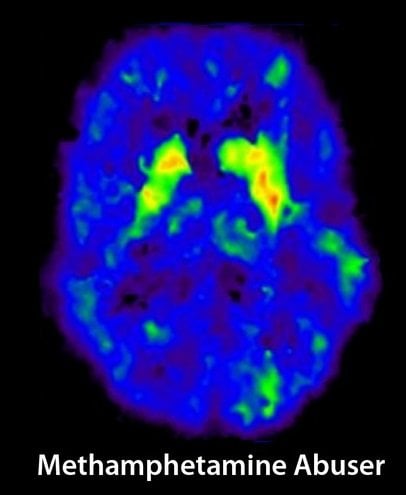 Researchers inhibited actin polymerization by blocking myosin II in the brains of rats and mice during the maintenance phase of methamphetamine related memory formation. Behavioral tests showed the animals persistently and immediately lost memories associated with methamphetamine, while no other memories were affected. This image is a brain scan of a person with methamphetamine addiction. Methamphetamine abuse decreases dopamine transporter activity and compromises mental function.
Home
Featured

The human brain is exquisitely adept at linking seemingly random details into a cohesive memory that can trigger myriad associations—some good, some not so good. For recovering addicts and individuals suffering from post-traumatic stress disorder (PTSD), unwanted memories can be devastating. Former meth addicts, for instance, report intense drug cravings triggered by associations with cigarettes, money, even gum (used to relieve dry mouth), pushing them back into the addiction they so desperately want to leave.

Now, for the first time, scientists from the Florida campus of The Scripps Research Institute (TSRI) have been able to erase dangerous drug-associated memories in mice and rats without affecting other more benign memories.

The surprising discovery, published this week online ahead of print by the journal Biological Psychiatry, points to a clear and workable method to disrupt unwanted memories while leaving the rest intact.

“Our memories make us who we are, but some of these memories can make life very difficult,” said Courtney Miller, a TSRI assistant professor who led the research. “Not unlike in the movie Eternal Sunshine of the Spotless Mind, we’re looking for strategies to selectively eliminate evidence of past experiences related to drug abuse or a traumatic event. Our study shows we can do just that in mice — wipe out deeply engrained drug-related memories without harming other memories.”

Changing the Structure of Memory

To produce a memory, a lot has to happen, including the alteration of the structure of nerve cells via changes in the dendritic spines—small bulb-like structures that receive electrochemical signals from other neurons. Normally, these structural changes occur via actin, the protein that makes up the infrastructure of all cells.

In the new study, the scientists inhibited actin polymerization—the creation of large chainlike molecules—by blocking a molecular motor called myosin II in the brains of mice and rats during the maintenance phase of methamphetamine-related memory formation.

In the tests, animals were trained to associate the rewarding effects of methamphetamine with a rich context of visual, tactile and scent cues. When injected with the inhibitor many days later in their home environment, they later showed a complete lack of interest when they encountered drug-associated cues. At the same time, the response to other memories, such as food rewards, was unaffected.

While the scientists are not yet sure why powerful methamphetamine-related memories are also so fragile, they think the provocative findings could be related to the role of dopamine, a neurotransmitter involved in reward and pleasure centers in the brain and known to modify dendritic spines. Previous studies had shown dopamine is released during both learning and drug withdrawal. Miller adds, “We are focused on understanding what makes these memories different. The hope is that our strategies may be applicable to other harmful memories, such as those that perpetuate smoking or PTSD.”