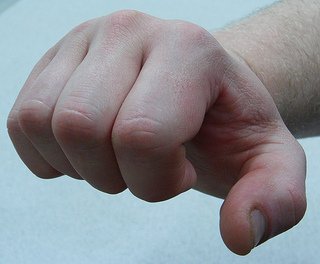 Researchers discovered that each fighting related injury resulted in a loss of 1.62 IQ points for boys, while girls lost an average of 3.02 IQ points as a result of injury.
Home
Featured

Injuries From Teen Fighting Deal a Blow to IQ

A new Florida State University study has found that adolescent boys who are hurt in just two physical fights suffer a loss in IQ that is roughly equivalent to missing an entire year of school. Girls experience a similar loss of IQ after only a single fighting-related injury.

The findings are significant because decreases in IQ are associated with lower educational achievement and occupational performance, mental disorders, behavioral problems and even longevity, the researchers said.

“It’s no surprise that being severely physically injured results in negative repercussions, but the extent to which such injuries affect intelligence was quite surprising,” said Joseph A. Schwartz, a doctoral student who conducted the study with Professor Kevin Beaver in FSU’s College of Criminology and Criminal Justice.

Their findings are outlined in the paper, “Serious Fighting-Related Injuries Produce a Significant Reduction in Intelligence,” which was published in the Journal of Adolescent Health. The study is among the first to look at the long-term effects of fighting during adolescence, a critical period of neurological development.

About 4 percent of high school students are injured as a result of a physical fight each year, the researchers said.

Schwartz and Beaver used data from the National Longitudinal Study of Adolescent Health collected between 1994 and 2002 to examine whether serious fighting-related injuries resulted in significant decreases in IQ over a 5- to 6-year time span. The longitudinal study began with a nationally representative sample of 20,000 middle and high school students who were tracked into adulthood through subsequent waves of data collection. At each wave of data collection, respondents were asked about a wide variety of topics, including personality traits, social relationships and the frequency of specific behaviors.

Perhaps not surprisingly, boys experienced a higher number of injuries from fighting than girls; however, the consequences for girls were more severe, a fact the researchers attributed to physiological differences that give males an increased ability to withstand physical trauma.

The researchers found that each fighting-related injury resulted in a loss of 1.62 IQ points for boys, while girls lost an average of 3.02 IQ points, even after controlling for changes in socio-economic status, age and race for both genders. Previous studies have indicated that missing a single year of school is associated with a loss of 2 to 4 IQ points.

The impact on IQ may be even greater when considering only head injuries, the researchers said. The data they studied took into account all fighting-related physical injuries.

The findings highlight the importance of schools and communities developing policies aimed at limiting injuries suffered during adolescence whether through fighting, bullying or contact sports, Schwartz said.

“We tend to focus on factors that may result in increases in intelligence over time, but examining the factors that result in decreases may be just as important,” he said. “The first step in correcting a problem is understanding its underlying causes. By knowing that fighting-related injuries result in a significant decrease in intelligence, we can begin to develop programs and protocols aimed at effective intervention.”