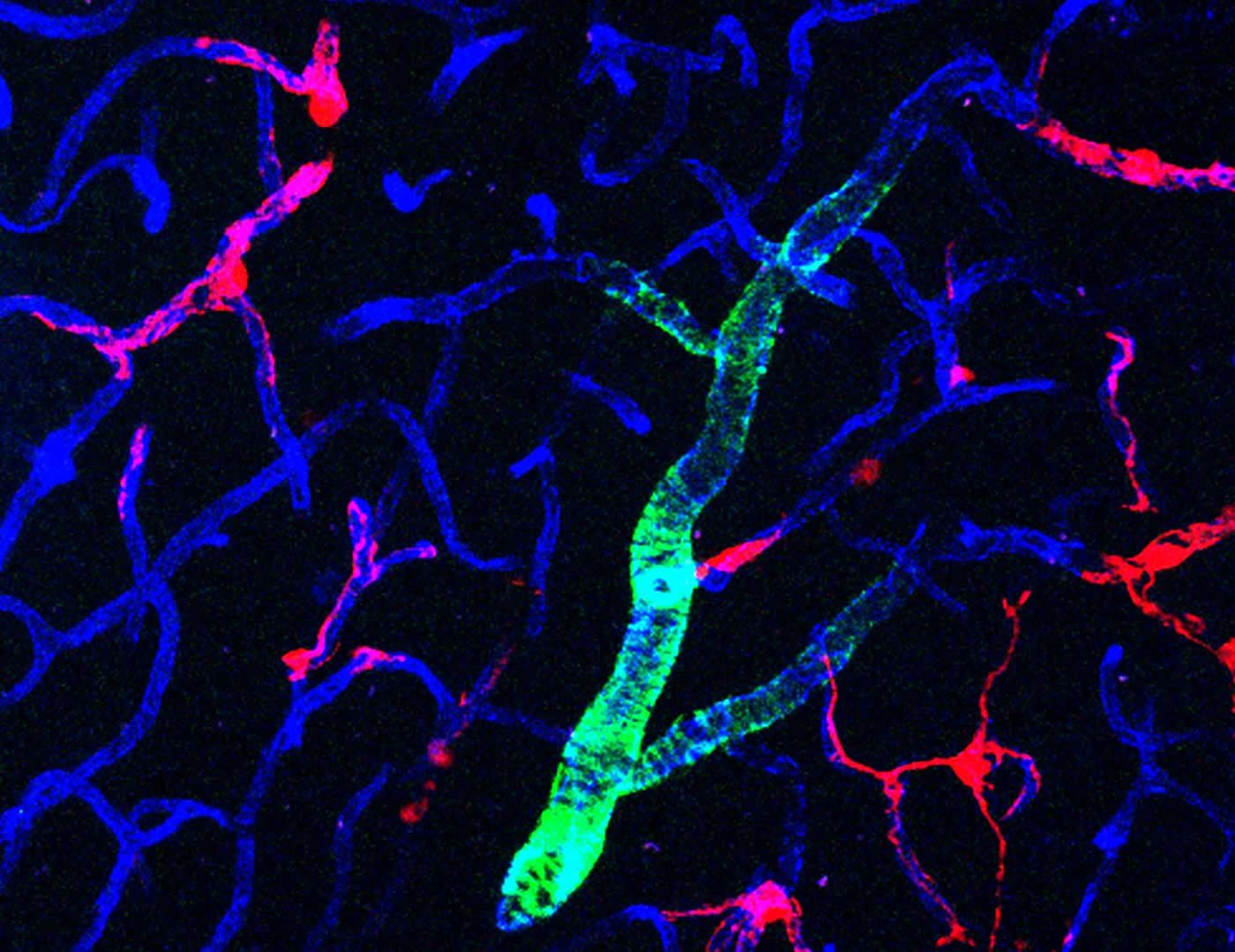 This image depicts capillaries in a mouse brain. Pericytes are labeled with a fluorescent red protein. The image is credited to A. M. Nikolakopoulou - Zlokovic Lab

Certain cells secrete a substance in the brain that protects neurons

USC researchers have discovered a secret sauce in the brain’s vascular system that preserves the neurons needed to keep dementia and other diseases at bay.

The finding, in a mouse model of the human brain, focuses on specific cells called pericytes and reveals that they play a previously unknown role in brain health. Pericytes secrete a substance that keeps neurons alive, even in the presence of leaky blood vessels that foul brain matter and result in cognitive decline.

The study, which appears today in Nature Neuroscience, helps explain the cascade of problems that lead to neurodegeneration after a stroke or traumatic brain injury, as well as in diseases like Alzheimer’s and Parkinson’s — and suggests a potential strategy for therapy.

“What this paper shows is if you lose these vascular cells, you start losing neurons. The link with neurodegeneration was really not that clear before,” said senior author Berislav Zlokovic, director of the Zilkha Neurogenetic Institute at the Keck School of Medicine of USC.

The discovery comes at a time when scientists are beginning to understand Alzheimer’s disease as the result of multiple processes that begin long before memory loss sets in. Many researchers are shifting their focus from the amyloid plaques that accumulate in the brain later in life toward other targets earlier in the timeline.

Zlokovic, for example, studies the layers of cells that make up blood vessels in the brain. His previous research shows that the more permeable, or leaky, a person’s brain capillaries, the more cognitive disability they have.

For this new experiment in mice, Zlokovic zeroed in on pericytes in the brain’s blood vessels. Pericytes help regulate blood flow and keep blood vessel walls sealed tight. When researchers artificially removed pericytes, they saw rapid degeneration of the blood-brain barrier, a slowdown of blood flow and the loss of brain cells.

To further understand the role of pericytes, the scientists infused mice with a protein, or growth factor, secreted by pericytes in the brain and not found elsewhere in the body. They found that, even with pericyte cells artificially removed, the growth factor protected neurons and the brain cells didn’t die. The results persisted even with constricted blood flow.

Because these pericytes are implicated in many diseases — including Huntington’s, Parkinson’s, stroke, brain trauma and amyotrophic lateral sclerosis — the research offers intriguing possibilities for further investigation.

“This opens up an entirely new view of the possible pathogenesis of Alzheimer’s disease,” Zlokovic said.

Pericytes are positioned between brain capillary endothelial cells, astrocytes and neurons. They degenerate in multiple neurological disorders. However, their role in the pathogenesis of these disorders remains debatable. Here we generate an inducible pericyte-specific Cre line and cross pericyte-specific Cre mice with iDTR mice carrying Cre-dependent human diphtheria toxin receptor. After pericyte ablation with diphtheria toxin, mice showed acute blood–brain barrier breakdown, severe loss of blood flow, and a rapid neuron loss that was associated with loss of pericyte-derived pleiotrophin (PTN), a neurotrophic growth factor. Intracerebroventricular PTN infusions prevented neuron loss in pericyte-ablated mice despite persistent circulatory changes. Silencing of pericyte-derived Ptn rendered neurons vulnerable to ischemic and excitotoxic injury. Our data demonstrate a rapid neurodegeneration cascade that links pericyte loss to acute circulatory collapse and loss of PTN neurotrophic support. These findings may have implications for the pathogenesis and treatment of neurological disorders that are associated with pericyte loss and/or neurovascular dysfunction.