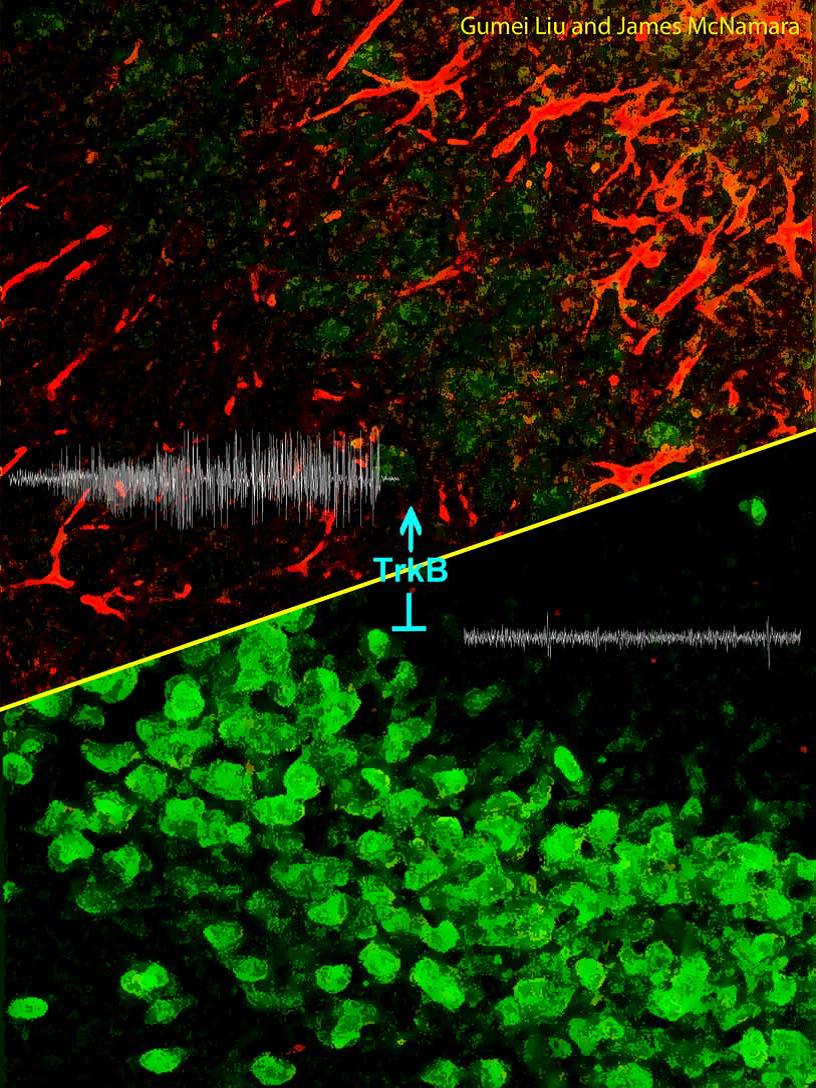 Duke Medicine researchers have identified a receptor in the nervous system that may be key to preventing epilepsy following a prolonged period of seizures.

Their findings from studies in mice, published online in the journal Neuron on June 20, 2013, provide a molecular target for developing drugs to prevent the onset of epilepsy, not just manage the disease’s symptoms.

“Unfortunately, there are no preventive therapies for any common disorder of the human nervous system – Alzheimer’s, Parkinson’s, schizophrenia, epilepsy – with the exception of blood pressure-lowering drugs to reduce the likelihood of stroke,” said study author James O. McNamara, M.D., professor of neurobiology at Duke Medicine.

Epilepsy is a serious neurological disorder marked by recurring seizures. Temporal lobe epilepsy – where seizures occur in the region of the brain where memories are stored and language, emotions and senses are processed – is the most common form, and can be devastating. Because afflicted individuals have seizures that impair their awareness and may have associated behavioral problems, they may have difficulty with everyday activities, including holding a job or obtaining a driver’s license.

Conventional therapies to treat epilepsy address the disease’s symptoms by trying to reduce the likelihood of having a seizure. However, many people with temporal lobe epilepsy still have seizures despite taking these drugs.

“This study opens a promising new avenue of research into treatments that may prevent the development of epilepsy,” said Vicky Whittemore, PhD, a program director at the National Institute of Neurological Disorders and Stroke, who oversees the grants that funded this study.

Retrospective studies of people with severe temporal lobe epilepsy reveal that many of them initially have an episode of prolonged seizures, known as status epilepticus. Status epilepticus is often followed by a period of seizure-free recovery before people start to experience recurring temporal lobe seizures.

In animal studies, inducing status epilepticus in an otherwise healthy animal can cause them to become epileptic. The prolonged seizures in status epilepticus are therefore thought to cause or importantly contribute to the development of epilepsy in humans.

“An important goal of this field has been to identify the molecular mechanism by which status epilepticus transforms a brain from normal to epileptic,” said McNamara. “Understanding that mechanism in molecular terms would provide a target with which one could intervene pharmacologically, perhaps to prevent an individual from becoming epileptic.”

Earlier research in epilepsy flagged a receptor in the nervous system called TrkB as a key player in transforming the brain from normal to epileptic. In the current study, McNamara and his colleagues sought to confirm if TrkB was important for status epilepticus-induced epilepsy.

When the researchers caused status epilepticus in the animals, both the normal and genetically modified mice developed epilepsy. However, treatment with 1NMPP1 after the prolonged period of seizures prevented epilepsy in the genetically altered but not the normal mice.

“This demonstrated that it is possible to intervene following status epilepticus and prevent the animal from becoming epileptic,” McNamara said.

Importantly, the researchers only administered treatment with 1NMPP1 for two weeks, which was sufficient to prevent epilepsy from developing in the mice when tested many weeks later. The results suggest that a preventive therapy may only need to be given for a limited period of time following the initial bout of prolonged seizures, not an individual’s entire life, which could prevent unnecessary side effects that come with long-term use of drugs.

In future studies, the researchers hope to determine the exact time window in which TrkB signaling needs to be repressed to prevent the onset of epilepsy. Long term, this research provides a molecular target for developing the first drugs to prevent epilepsy.

“This study provides a strong rationale for the development of selective inhibitors of TrkB signaling,” said McNamara.

In addition to McNamara, study authors include Gumei Liu, Bin Gu, Xiao-Ping He, Rasesh B. Joshi, Harold D. Wackerle, Ramona Marie Rodriguiz and William C. Wetsel. The study was supported by funding from the National Institute of Neurological Disorders and Stroke (NS56217 and NS060728).