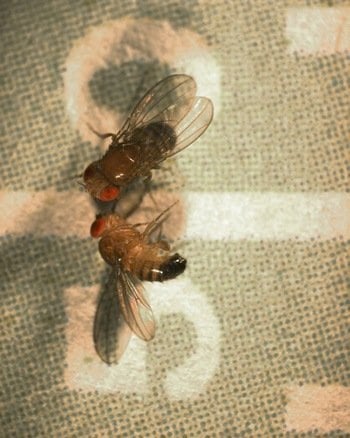 From Football to Flies: Lessons About Traumatic Brain Injury

Then he remembered an unexplored observation from nearly 40 years ago: a sharp strike to a vial of fruit flies left them temporarily stunned, only to recover a short time later. At the time he had marked it only as a curiosity.

Now a professor of genetics at UW–Madison, Ganetzky is turning his accidental discovery into a way to study traumatic brain injury (TBI). He and David Wassarman, a UW professor of cell and regenerative biology, report this week (Oct. 14) in the Proceedings of the National Academy of Sciences on the first glimpses of the genetic underpinnings of susceptibility to brain injuries and links to human TBI.

TBIs occur when a force on the body jostles the brain inside the head, causing it to strike the inside of the skull. More than 1.7 million TBIs occur each year in the United States, about one-third due to falls and the rest mainly caused by car crashes, workplace accidents, and sports injuries. TBIs are also a growing issue in combat veterans exposed to explosions.

In many cases, the immediate effects of TBI are temporary and may seem mild — confusion, dizziness or loss of coordination, headaches, vision problems. But over time, impacts may lead to neurodegeneration and related symptoms, including memory loss, cognitive problems, severe depression, or Alzheimer’s-like dementia. Together TBIs cost tens of billions of dollars annually in medical expenses and indirect costs such as lost productivity.

Though TBIs can be classified from “mild” to “severe” based on symptoms, there is a poor understanding of the underlying medical causes.

“Unlike many important medical problems — high blood pressure, cancer, diabetes, heart disease — where we know something about the biology, we know almost nothing about TBI,” Ganetzky says. “Why does a blow to the head cause epilepsy? Or how does it lead down the road to neurodegeneration? Nobody has answers to those questions — in part, because it’s really hard to study in humans.”

Enter the fruit fly. The fly brain is encased in a hard cuticle analogous to the skull, and the basic mechanisms affecting nervous system function are the same in flies and mammals. In the new study, Ganetzky and Wassarman describe a way to reproducibly inflict traumas that seem to mimic the injuries and symptoms of human TBI.

“Now we have a system where we can look at the variables that are the inputs into TBI and determine the relative contributions of each to the pathological outcomes. That’s the real power of the flies,” says Wassarman.

As with humans, few flies die from the immediate impact. Afterward, though, the treated flies show many of the same physical consequences as humans who sustain concussions or other TBIs, including temporary incapacitation, loss of coordination and activation of the innate immune response in the short term, followed by neurodegeneration and sometimes an early death.

The researchers, led by Rebeccah Katzenberger, senior research specialist in the UW Department of Cell and Regnerative Biology, also found that age seems to play an important role. Older flies are more susceptible than younger ones to the effects of the impact and, Wassarman says, many of the outcomes of TBI are very similar to normal aging processes.

With this model, the researchers say, they can now draw on the vast collection of genetic tools and techniques available for fruit flies to probe the underlying drivers of damage.

“What we really want is to understand the immediate and long term consequences in cellular and molecular terms,” says Ganetzky. “From that understanding we can proceed in a more directed way to diagnostics and therapeutics.”

One of the key things they have already identified is the crucial role genetics plays in determining the outcome of an injury, revealed by the high degree of variability seen among different strains of flies. This finding may explain why all potential TBI drugs to date have failed in clinical trials despite showing promise in individual rodent models.

As Wassarman explains, “The heart of the problem of solving traumatic brain injury is that we’re all different.”

They are continuing to develop the model through large-scale genetic analysis and have already found that different sets of genes correlate with susceptibility in flies of different ages. With their system, they can also examine the effects of repeated injuries.

Ganetzky sees tremendous potential for developing applications from the fly-based approach and the Wisconsin Alumni Research Foundation (WARF) has filed for patent protection on the discovery.

“These exciting findings that we can study traumatic brain injury — a disorder of growing concern for athletes, the military, and parents — in the elegantly simple model of fruit flies is sure to interest those researchers and companies looking to address this concern,” says Jennifer Gottwald, WARF licensing manager. “The use of this model can accelerate the work of the medical research community in finding treatments and therapies to help patients.”

The research is funded by the National Institutes of Health. Co-authors on the paper include Katzenberger, Carin Loewen, Douglas Wassarman, and Andrew Petersen.

How did they do that? Head injuries in flies

Looking for a way to apply consistent forces to fruit flies to study the impacts of traumatic brain injuries, UW­-Madison professor David Wassarman visited his local hardware store. From his foray developed the HIT device (for High-Impact Trauma), involving a stiff spring mounted on a piece of plywood, a polyurethane mat, and some Velcro.

The Velcro holds a standard laboratory vial — containing flies — on the end of the spring. When the spring is bent then released, the vial crashes into the mat and delivers a mechanical blow as the flies bounce against the vial wall. The rapid acceleration and deceleration experienced by the flies – and their brains within their rigid head capsules – mimics what a person would experience in a collision or other impact.