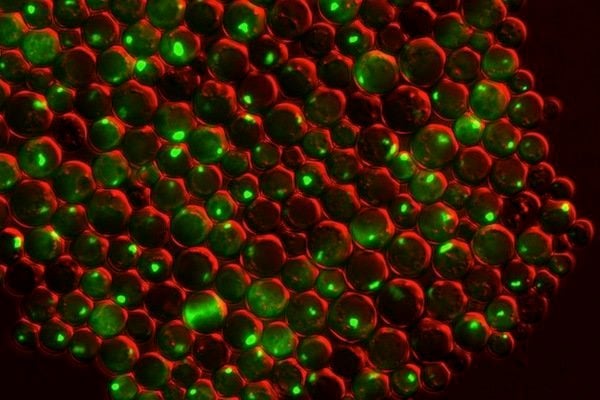 Scientists at UW-Madison have made a discovery that, if replicated in humans, suggests a shortage of zinc may contribute to diseases like Alzheimer’s and Parkinson’s, which have been linked to defective proteins clumping together in the brain.

With proteins, shape is everything. The correct shape allows some proteins to ferry atoms or molecules about a cell, others to provide essential cellular scaffolding or identify invading bacteria for attack. When proteins lose their shape due to high temperature or chemical damage, they stop working and can clump together — a hallmark of Parkinson’s and Alzheimer’s.

The UW researchers have discovered another stress that decreases protein stability and causes clumping: a shortage of zinc, an essential metal nutrient.

Zinc ions play a key role in creating and holding proteins in the correct shape. In a study just published in the online Journal of Biological Chemistry, Colin MacDiarmid and David Eide show that the gene Tsa1 creates “protein chaperones” that prevent clumping of proteins in cells with a zinc shortage. By holding proteins in solution, Tsa1 prevents damage that can otherwise lead to cell death.

For simplicity, the researchers studied the system in yeast — a single-celled fungus. Yeast can adapt to both shortages and excesses of zinc, says MacDiarmid, an associate scientist. “Zinc is an essential nutrient but if there’s too much, it’s toxic. The issue for the cell is to find enough zinc to grow and support all its functions, while at the same time not accumulating so much that it kills the cell.”

Cells that are low in zinc also produce proteins that counter the resulting stress, including one called Tsa1.

The researchers already knew that Tsa1 could reduce the level of harmful oxidants in cells that are short of zinc. Tsa1, MacDiarmid says, “is really a two-part protein. It can get rid of dangerous reactive oxygen species that damage proteins, but it also has this totally distinct chaperone function that protects proteins from aggregating. We found that the chaperone function was the more important of the two.”

“In yeast, if a cell is deficient in zinc, the proteins can mis-fold, and Tsa1 is needed to keep the proteins intact so they can function,” says Eide, a professor of nutritional science. “If you don’t have zinc, and you don’t have Tsa1, the proteins will glom together into big aggregations that are either toxic by themselves, or toxic because the proteins are not doing what they are supposed to do. Either way, you end up killing the cell.”

While the medical implications remain to be explored, there are clear similarities between yeast and human cells. “Zinc is needed by all cells, all organisms, it’s not just for steel roofs, nails and trashcans,” Eide says. “The global extent of zinc deficiency is debated, but diets that are high in whole grains and low in meat could lead to deficiency.”

If low zinc supply has the same effect on human cells as on yeast, zinc deficiency might contribute to human diseases that are associated with a build-up of “junked” proteins, such as Parkinson’s and Alzheimer’s. Eide says a similar protective system to Tsa1 also exists in animals, and the research group plans to move ahead by studying that system in human cell culture.

Notes about this neurodegenerative disease research