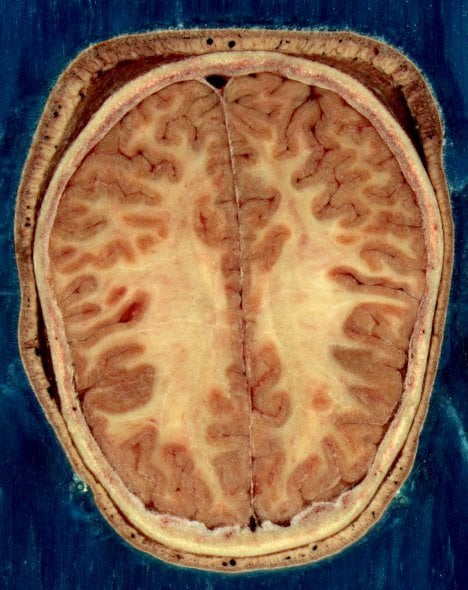 The brain's white matter is composed of millions of nerve fibers called axons that act like communication cables connecting various regions of the brain. This is a horizontal slice of the head of an adult female showing white matter.
Home
Featured

The distribution of white matter brain abnormalities in some patients after mild traumatic brain injury (MTBI) closely resembles that found in early Alzheimer’s dementia, according to a new study published online in the journal Radiology.

“Findings of MTBI bear a striking resemblance to those seen in early Alzheimer’s dementia,” said the study’s lead author, Saeed Fakhran, M.D., assistant professor of radiology in the Division of Neuroradiology at the University of Pittsburgh School of Medicine. “Additional research may help further elucidate a link between these two disease processes.”

MTBI, or concussion, affects more than 1.7 million people in the United States annually. Despite the name, these injuries are by no means mild, with approximately 15 percent of concussion patients suffering persistent neurological symptoms.

“Sleep-wake disturbances are among the earliest findings of Alzheimer’s patients, and are also seen in a subset of MTBI patients,” Dr. Fakhran said. “Furthermore, after concussion, many patients have difficulty filtering out white noise and concentrating on the important sounds, making it hard for them to understand the world around them. Hearing problems are not only an independent risk factor for developing Alzheimer’s disease, but the same type of hearing problem seen in MTBI patients has been found to predict which patients with memory problems will go on to develop Alzheimer’s disease.”

For the study, Dr. Fakhran and colleagues set out to determine if there was a relationship between white matter injury patterns and severity of post-concussion symptoms in MTBI patients with normal findings on conventional magnetic resonance imaging (MRI) exams. The researchers studied data from imaging exams performed on 64 MTBI patients and 15 control patients, using an advanced MRI technique called diffusion tensor imaging, which identifies microscopic changes in the brain’s white matter.

Of the MTBI patients, 42 (65.6 percent) were men, and the mean age was 17. Sports injury was the reason for concussion in two-thirds of the patients. All patients underwent neurocognitive evaluation with Immediate Post-Concussion Assessment and Cognitive Testing (ImPACT). The researchers analyzed correlation between fractional anisotropy values, the ImPACT total symptom score, and findings of sleep-wake disturbances.

Sleep-wake disturbances are among the most disabling post-concussive symptoms, directly decreasing quality of life and productivity and magnifying post-concussion memory and social dysfunction.

The results showed a significant correlation between high ImPACT total symptom score and reduced fractional anisotropy at the gray-white junction, most prominently in the auditory cortex. Significantly decreased fractional anisotropy was found in patients with sleep-wake disturbances in the parahippocampal gyri relative to patients without sleep-wake disturbances.

“When we sleep, the brain organizes our experiences into memories, storing them so that we can later find them,” Dr. Fakhran said. “The parahippocampus is important for this process, and involvement of the parahippocampus may, in part, explain the memory problems that occur in many patients after concussion.”

According to Dr. Fakhran, the results suggest that the true problem facing concussion patients may not be the injury itself, but rather the brain’s response to that injury.

“Traditionally, it has been believed that patients with MTBI have symptoms because of abnormalities secondary to direct injury,” he said. “Simply put, they hit their head, damaged their brain at the point of trauma and thus have symptoms from that direct damage. Our preliminary findings suggest that the initial traumatic event that caused the concussion acts as a trigger for a sequence of degenerative changes in the brain that results in patient symptoms and that may be potentially prevented. Furthermore, these neurodegenerative changes are very similar to those seen in early Alzheimer’s dementia.”

The researchers hope that these findings may lead to improved treatments in the future.

“The first step in developing a treatment for any disease is understanding what causes it,” Dr. Fakhran said. “If we can prove a link, or even a common pathway, between MTBI and Alzheimer’s, this could potentially lead to treatment strategies that would be potentially efficacious in treating both diseases.”

Notes about this concussion and TBI research

Contact: Linda Brooks – Radiological Society of North America
Source: Radiological Society of North America press release
Image Source: The brain slice white matter image is credited to NLM/NIH and is in the public domain.
Original Research: Abstract for “Symptomatic White Matter Changes in Mild Traumatic Brain Injury Resemble Pathologic Features of Early Alzheimer’s Dementia” by Dr. Fakhran were Karl Yaeger, M.D., and Lea Alhilali, M.D will be published in Radiology. We will update with a link to the research and doi when available.