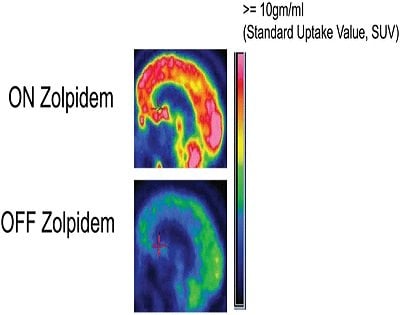 Pattern of brain activity points to possible neural circuit switched on by drug and may identify other patients who could respond.

George Melendez has been called a medical miracle. After a near drowning deprived his brain of oxygen, Melendez remained in a fitful, minimally conscious state until his mother, in 2002, decided to give him the sleep aid drug Ambien to quiet his moaning and writhing. The next thing she knew, her son was quietly looking at her and trying to talk. He has been using the drug ever since to maintain awareness, but no one could understand why Ambien led to such an awakening.

Now, a team of scientists led by Weill Cornell Medical College has discovered a signature of brain activity in Melendez and two other similarly “awakened” patients they say explain why he and others regain some consciousness after using Ambien or other drugs or treatments. The pattern of activity, reported Nov. 19 in the journal eLife, was identified by analyzing the common electroencephalography (EEG) test, which tracks brain waves.

“We found a surprisingly consistent picture of electrical activity in all three patients before they receive the drug. Most interesting is that their specific pattern of activity suggests a particular process occurring in the brain cells of the cerebral cortex and also supports the role of a crucial brain circuit,” says the study’s senior investigator, Dr. Nicholas Schiff, the Jerold B. Katz Professor of Neurology and Neuroscience and professor of public health at Weill Cornell. “These findings may help predict other patients who might similarly harbor reserve capacity, whether they are able to respond to Ambien or other approaches.” Dr. Schiff is also on the faculty of the Feil Family Brain and Mind Research Institute at Weill Cornell and is a neurologist at NewYork-Presbyterian Hospital/Weill Cornell Medical Center.

“We are focused on finding ways to identify patients who have a functional reserve of cognitive capacities that can be rescued and how to achieve this result,” Dr. Schiff adds. “These findings give us a very important lead to follow, and we will now rigorously test their implications in other patients.”

Although it is not precisely known how many Americans are diagnosed as severely brain injured with disorders of consciousness, by one estimate there are nearly 300,000 patients trapped in a minimally conscious state who may retain some awareness, according to Dr. Schiff.

Riding a Wave of Excitation

The three patients in the study suffered brain damage in different ways. One fell and the other had a brain aneurysm that led to multiple strokes. Melendez was in a car accident that led to his nearly drowning. All three patients — two men and a woman — become aware when Ambien was used, a rare response that has been documented in fewer than 15 brain-injured patients.

The research team, which included scientists from Memorial Sloan-Kettering Cancer Center, Boston University School of Medicine, and the University Hospital of Liège in Belgium, used EEG to measure electrical activity in the patients’ brains before and after they were given the drug.

Although each patient’s brain was damaged in different ways, all showed the same unique features of low frequency waves in their EEG readings. These low frequency oscillations are most prominent over the frontal cortex, a region strongly dependent for its activity on other brain structures, particularly the central thalamus and the striatum, which together support short-term memory, reward, motivation, attention, alertness and sleep, among other functions.

In this setting of an idling brain, the investigators propose that Ambien works like any anesthesia drug, in that it briefly triggers a fast wave of excitation in brain cells before producing sleep — a phenomenon known as paradoxical excitation. Instead of going on to produce sedation and sleep, as it does in healthy people who use the drug, zolpidem further activates the brain after it’s affected the idling cells, allowing the patients to become more awake than at baseline. “What we think is happening in these patients is that the initial excitation produced by Ambien turns on a specific circuit. The drug creates the opportunity for the brain to effectively catch a ride on this initial wave of excitation, and turn itself back on,” Dr. Schiff says.

“We believe the switch that Ambien turns on is at the level of the joint connections between these three brain structures,” Dr. Schiff says.

The pattern of brain activity seen in the EEG on Ambien was also the same in all the patients in the study. But the circuit turns off again when the effects of the drug diminish. Using the drug regularly at mealtimes, Melendez can speak fluently, and read and write simple phrases. His tremors and spasticity are significantly reduced on Ambien and he can use objects, such as a spoon, and is alert and can communicate. The first patient in the study can reliably move from minimally conscious to “the mid-range of what is called a confusional state — a more alert status, but not full consciousness,” Dr. Schiff says. “Use of Ambien offers a step in the right direction, but certainly not a cure.”

Differnt Ways to Kick-Start the Brain

The resting EEG pattern the researchers saw in the patients indicates they have a “recruitable reserve” of function in these critical brain areas that Ambien can harness to turn the brain on, even if only temporarily. “The idea is that hopefully we can screen other patients with EEG to find out if they also have such a reserve,” Dr. Schiff says.

And while some of these patients may not respond to Ambien — as the drug works at a very specific brain receptor and individuals can vary considerably in having enough of it in the key components of the proposed circuit — other drugs may target the same structures and potentially produce similar effects, he says. For example, two drugs (amantadine and L-Dopa) that provide extra dopamine, a brain chemical that fuels the part of the brain damaged in the study’s patients, have been shown to have similar effects on restoring function in patients with severe brain injuries, as has electrical brain stimulation of the central thalamus.

“Now that we have uncovered important insight into fundamental mechanisms underlying the dramatic and rare response of some severely brain-injured patients to Ambien, we hope to systematically explore ways to achieve such kick-starts in other patients — that is our goal,” Dr. Schiff says.

Notes about this brain injury and neurology research