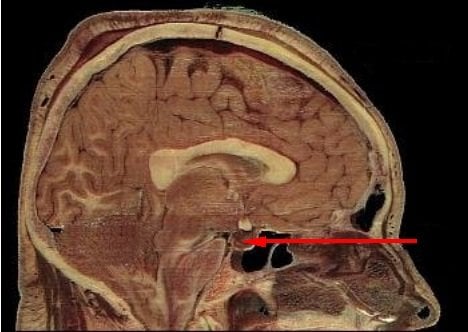 Researchers looked at 19 British soldiers with moderate-to-severe TBI caused by IED blasts while on duty in Afghanistan. They also looked at 39 civilians who suffered TBI as result of falls, assaults and accidents. The researchers found much higher proportions of soldiers with blast related TBI had pituitary hormone problems than those with non-blast related TBI. This image shows the location of the pituitary gland in the human brain.
Home
Featured

Soldiers with injuries affecting the pituitary gland may suffer psychological and metabolic symptoms which impede their recovery.

The researchers, from Imperial College London and the Royal Centre for Defence Medicine, say identifying these sufferers will enable them to receive appropriate hormone replacement therapy.

The research was funded by the Medical Research Council is published in the journal Annals of Neurology.

It found that a much higher proportion of soldiers with blast injuries had pituitary hormone problems (32 per cent) than in the non-blast control group (2.6 per cent).

One in five of the soldiers ended up receiving hormone treatment with growth hormone, testosterone and/or hydrocortisone – a replacement for the stress hormone cortisol.

The study also showed that the soldiers who had pituitary dysfunction following blast injury had more severe damage to white matter connections within the brain, and more severe cognitive problems, such as being slow in processing information, than those who did not have hormone problems.

The recent conflicts in Iraq and Afghanistan have seen rapid advances in personal protective equipment and in the medical management of severe trauma. These gains have meant that increasing numbers of soldiers are surviving previously fatal and complex injuries.

Injuries caused by IEDs are so numerous that they have been called the ‘signature injury’ of these conflicts. Between December 2009 and March 2012, 183 UK soldiers survived a moderate to severe blast traumatic brain injury in Afghanistan. The number of such injuries among US troops is much higher. The complex physical forces involved in a blast have led to much speculation about how the blast wave itself causes brain injury.

Dr Tony Goldstone, from the MRC Clinical Sciences Centre at Imperial College London, who led the study, said: “This study was set up to see if there were facets unique to the kind of trauma caused to the brain by IEDs. We found that there was a high prevalence of hormonal problems in soldiers with these kinds of injuries.

“This study involved a relatively small number of soldiers, and so assessment of additional patients will be needed to confirm such a prevalence rate. However the results do emphasise the importance of actively screening for pituitary problems in all soldiers and others who have had moderate to severe brain injury from exposure to blast. This will enable identification of those who may benefit from hormonal treatments to aid their rehabilitation, recovery and quality of life.”

The patients were treated in the multi-disciplinary traumatic brain injury clinic at the Imperial Centre for Endocrinology at Imperial College Healthcare NHS Trust and scanned at the Computational, Cognitive and Clinical Neuroimaging Laboratory at Imperial College London by Professor David Sharp and Major David Baxter.

Air Marshal Paul Evans, Surgeon General said: “I fully support the research that has been undertaken by Imperial College London and the Ministry of Defence. As Surgeon General, I am committed to ensuring Service personnel benefit from the latest advances in medical research and we continue to conduct research into traumatic brain injury with colleagues at Imperial College London as well as our US and other NATO partners. A Defence Medical Services working group identifies priority areas for TBI research and MOD policy continues to be reviewed in light of emerging best practice. Working in partnership will ensure our personnel benefit as well as enable best practice to be shared between the MOD and NHS.”

Professor David Lomas, Chair of the MRC’s Population and Systems Medicine Board, which funded the research, said: “Trauma is a serious health problem that has a major impact on people in both a civilian and military setting. By linking academic and military research programmes through studies such as this we will build a greater understanding of acute trauma that will inform future approaches to trauma management, to ensure that people suffering major injury receive the most advanced specialist care.”