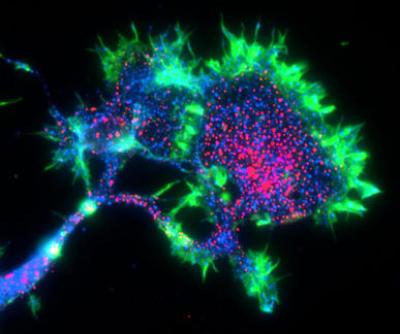 Versatile Proteins Could be New Target for Alzheimer’s Drugs

NIH-funded discovery began with asking how the brain learns to see.

A class of proteins that controls visual system development in the young brain also appears to affect vulnerability to Alzheimer’s disease in the aging brain. The proteins, which are found in humans and mice, join a limited roster of molecules that scientists are studying in hopes of finding an effective drug to slow the disease process.

“People are just beginning to look at what these proteins do in the brain. While more research is needed, these proteins may be a brand new target for Alzheimer’s drugs,” said Carla Shatz, Ph.D., the study’s lead investigator. Dr. Shatz is a professor of biology and neurobiology at Stanford University in California, and the director of Stanford’s interdisciplinary biosciences program, BioX.

She and her colleagues report that LilrB2 (pronounced “leer-bee-2”) in humans and PirB (“peer-bee”) in mice can physically partner with beta-amyloid, a protein fragment that accumulates in the brain during Alzheimer’s disease. This in turn triggers a harmful chain reaction in brain cells. In a mouse model of Alzheimer’s, depleting PirB in the brain prevented the chain reaction and reduced memory loss.

“These findings provide valuable insight into Alzheimer’s, a complex disorder involving the abnormal build-up of proteins, inflammation and a host of other cellular changes,” said Neil Buckholtz, Ph.D., director of the neuroscience division at NIA. “Our understanding of the various proteins involved, and how these proteins interact with each other, may one day result in effective interventions that delay, treat or even prevent this dreaded disease.”

Alzheimer’s disease is the most common cause of dementia in older adults, and affects as many as 5 million Americans. Large clumps—or plaques—of beta-amyloid and other proteins accumulate in the brain during Alzheimer’s, but many researchers believe the disease process starts long before the plaques appear. Even in the absence of plaques, beta-amyloid has been shown to cause damage to brain cells and the delicate connections between them.

Dr. Shatz’s discovery took a unique path. She is a renowned neuroscientist, but Alzheimer’s disease is not her focus area. For decades, she has studied plasticity—the brain’s capacity to learn and adapt—focusing mostly on the visual system.

“Dr. Shatz has always been a leader in the field of plasticity, and now she’s taken yet another innovative step—giving us new insights into the abnormal plasticity that occurs in Alzheimer’s disease,” said Michael Steinmetz, Ph.D., a program director at NEI. “These findings rest squarely on basic research into the development of the visual system.” NEI has funded Dr. Shatz for more than 35 years.

During development, the eyes compete to connect within a limited territory of the brain—a process known as ocular dominance plasticity. The competition takes place during a limited time in early life. If visual experience through one eye is impaired during that time—for example, by a congenital cataract (present from birth)—it can permanently lose territory to the other eye.

“Ocular dominance is a classic example of how a brain circuit can change with experience,” Dr. Shatz said. “We’ve been trying to understand it at a molecular level for a long time.”

Her search eventually led to PirB, a protein on the surface of nerve cells in the mouse brain. She discovered that mice without the gene for PirB have an increase in ocular dominance plasticity. In adulthood, when the visual parts of their brains should be mature, the connections there are still flexible. This established PirB as a “brake on plasticity” in the healthy brain, Dr. Shatz said.

It wasn’t long before she began to wonder if PirB might also put a brake on plasticity in Alzheimer’s disease. In the current study, she pursued that question with Taeho Kim, Ph.D., a postdoctoral fellow in her lab, and Christopher M. William, M.D., Ph.D., a neuropathology fellow at Massachusetts General Hospital in Boston. Bradley Hyman, M.D., Ph.D., a professor of neurology at Mass General, was a collaborator on the project.

First, the team repeated the genetic experiment that Dr. Shatz had done in normal mice—but this time, they deleted the PirB gene in the Alzheimer’s mice. By about nine months of age, these mice typically develop learning and memory problems. But that didn’t happen in the absence of PirB.

Next, the researchers began thinking about how PirB might fit into the Alzheimer’s disease process, and particularly how it might interact with beta-amyloid. Dr. Kim theorized that since PirB resides on the surface of nerve cells, it might act as a binding site—or receptor—for beta-amyloid. Indeed, he found that PirB binds tightly to beta-amyloid, especially to tiny clumps of it that are believed to ultimately grow into plaques.

Beta-amyloid is known to weaken synapses—the connections between nerve cells. The researchers found that PirB appears to be an accomplice in this process. Without PirB, synapses in the mouse brain were resistant to the effects of beta-amyloid. Other experiments showed that binding between PirB and beta-amyloid can trigger a cascade of harmful reactions that can lead to the breakdown of synapses.

Although PirB is a mouse protein, humans have a closely related protein called LilrB2. The researchers found that this protein also binds tightly to beta-amyloid. By examining brain tissue from people with Alzheimer’s disease, they also found evidence that LilrB2 may trigger the same harmful reactions that PirB can trigger in the mouse brain.

“These are novel results, and direct interaction between beta-amyloid and PirB-related proteins opens up welcome avenues for investigating new drug targets for Alzheimer’s disease,” said Roderick Corriveau, Ph.D., a program director at NINDS.

Dr. Shatz said she hopes to interest other researchers to work on developing drugs to block PirB and LilrB2. Currently, no drugs treat the underlying causes of Alzheimer’s disease. Most of the interventions that have reached clinical testing are designed to clear away beta-amyloid. To date, only two other beta-amyloid receptors (PrP-C and EphB2) have been found and are being pursued as drug targets.

The study was funded by NEI grants EY002858 and EY020485, NIA grants AG041507 and AG005134, and NINDS grant NS069811. Other funding was provided by the Mathers Charitable Foundation, the Ellison Medical Foundation, Stanford University, the National Science Foundation, and the Howard Hughes Medical Institute.