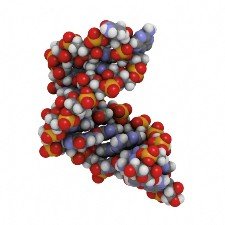 Researchers analyzed changes in the levels of microRNAs in the hippocampi of young, middle-aged, and old mice with an Alzheimer's-disease-like condition. They found that some of the microRNAs were expressed in exactly inverse amounts in mice with Alzheimer's disease as they were in mice from the enriched environment. This is a model of a microRNA molecule
Home
Featured

TAU researchers identify specific molecules that could be targeted to treat the disorder.

Plaques and tangles made of proteins are believed to contribute to the debilitating progression of Alzheimer’s disease. But proteins also play a positive role in important brain functions, like cell-to-cell communication and immunological response. Molecules called microRNAs regulate both good and bad protein levels in the brain, binding to messenger RNAs to prevent them from developing into proteins.

Now, Dr. Boaz Barak and a team of researchers in the lab of Prof. Uri Ashery of Tel Aviv University’s Department of Neurobiology at the George S. Wise Faculty of Life Sciences and the Sagol School of Neuroscience have identified a specific set of microRNAs that detrimentally regulate protein levels in the brains of mice with Alzheimer’s disease and beneficially regulate protein levels in the brains of other mice living in a stimulating environment.

“We were able to create two lists of microRNAs — those that contribute to brain performance and those that detract — depending on their levels in the brain,” says Dr. Barak. “By targeting these molecules, we hope to move closer toward earlier detection and better treatment of Alzheimer’s disease.”

Prof. Daniel Michaelson of TAU’s Department of Neurobiology in the George S. Wise Faculty of Life Sciences and the Sagol School of Neuroscience, Dr. Noam Shomron of TAU’s Department of Cell and Developmental Biology and Sagol School of Neuroscience, Dr. Eitan Okun of Bar-Ilan University, and Dr. Mark Mattson of the National Institute on Aging collaborated on the study, published in Translational Psychiatry.

Alzheimer’s disease is the most common form of dementia. Currently incurable, it increasingly impairs brain function over time, ultimately leading to death. The TAU researchers became interested in the disease while studying the brains of mice living in an “enriched environment” — an enlarged cage with running wheels, bedding and nesting material, a house, and frequently changing toys. Such environments have been shown to improve and maintain brain function in animals much as intellectual activity and physical fitness do in people.

The researchers ran a series of tests on a part of the mice’s brains called the hippocampus, which plays a major role in memory and spatial navigation and is one of the earliest targets of Alzheimer’s disease in humans. They found that, compared to mice in normal cages, the mice from the enriched environment developed higher levels of good proteins and lower levels of bad proteins. Then, for the first time, they identified the microRNAs responsible for regulating the expression of both good and bad proteins.

Armed with this new information, the researchers analyzed changes in the levels of microRNAs in the hippocampi of young, middle-aged, and old mice with an Alzheimer’s-disease-like condition. They found that some of the microRNAs were expressed in exactly inverse amounts in mice with Alzheimer’s disease as they were in mice from the enriched environment. The results were higher levels of bad proteins and lower levels of good proteins in the hippocampi of old mice with Alzheimer’s disease. The microRNAs the researchers identified had already been shown or predicted to regulate the expression of proteins in ways that contributed to Alzheimer’s disease. Their finding that the microRNAs are inversely regulated in mice from the enriched environment is important, because it suggests the molecules can be targeted by activities or drugs to preserve brain function.

Two findings appear to have particular potential for treating people with Alzheimer’s disease. In the brains of old mice with the disease, microRNA-325 was diminished, leading to higher levels of tomosyn, a protein that is well known to inhibit cellular communication in the brain. The researchers hope that eventually microRNA-325 can be used to create a drug to help Alzheimer’s patients maintain low levels of tomosyn and preserve brain function. Additionally, the researchers found several important microRNAs at low levels starting in the brains of young mice. If the same can be found in humans, these microRNAs could be used as biomarker to detect Alzheimer’s disease at a much earlier age than is now possible — at 30 years of age, for example, instead of 60.

“Our biggest hope is to be able to one day use microRNAs to detect Alzheimer’s disease in people at a young age and begin a tailor-made treatment based on our findings, right away,” says Dr. Barak.