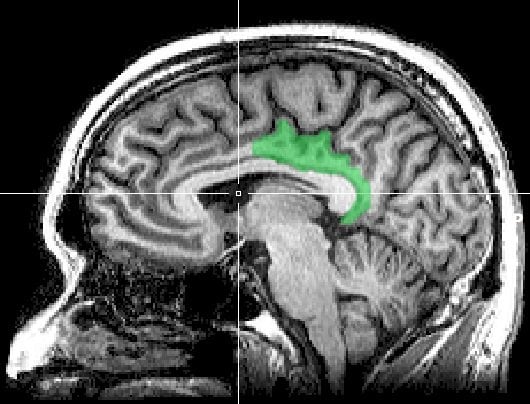 The part of the default mode network most harmed by the onset of Alzheimer’s disease was the connection between two brain areas associated with memory, the posterior cingulate and medial temporal regions. This is a sagittal MRI slice with highlighting indicating location of the posterior cingulate.
Home
Featured

In patients with early Alzheimer’s disease, disruptions in brain networks emerge about the same time as chemical markers of the disease appear in the spinal fluid, researchers at Washington University School of Medicine in St. Louis have shown.

While two chemical markers in the spinal fluid are regarded as reliable indicators of early disease, the new study, published in JAMA Neurology, is among the first to show that scans of brain networks may be an equally effective and less invasive way to detect early disease.

“Tracking damage to these brain networks may also help us formulate a more detailed understanding of what happens to the brain before the onset of dementia,” said senior author Beau Ances, MD, PhD, associate professor of neurology and of biomedical engineering.

Diagnosing Alzheimer’s early is a top priority for physicians, many of whom believe that treating patients long before dementia starts greatly improves the chances of success.

Ances and his colleagues studied 207 older but cognitively normal research volunteers at the Charles F. and Joanne Knight Alzheimer’s Disease Research Center at Washington University. Over several years, spinal fluids from the volunteers were sampled multiple times and analyzed for two markers of early Alzheimer’s: changes in amyloid beta, the principal ingredient of Alzheimer’s brain plaques, and in tau protein, a structural component of nerve cells.

The volunteers were also scanned repeatedly using a technique called resting state functional magnetic resonance imaging (fMRI). This scan tracks the rise and fall of blood flow in different brain regions as patients rest in the scanner. Scientists use the resulting data to assess the integrity of the default mode network, a set of connections between different brain regions that becomes active when the mind is at rest.

Earlier studies by Ances and other researchers have shown that Alzheimer’s damages connections in the default mode network and other brain networks.

The new study revealed that this damage became detectable at about the same time that amyloid beta levels began to fall and tau levels started to rise in spinal fluid. The part of the default mode network most harmed by the onset of Alzheimer’s disease was the connection between two brain areas associated with memory, the posterior cingulate and medial temporal regions.

The researchers are continuing to study the connections between brain network damage and the progress of early Alzheimer’s disease in normal volunteers and in patients in the early stages of Alzheimer’s-associated dementia.