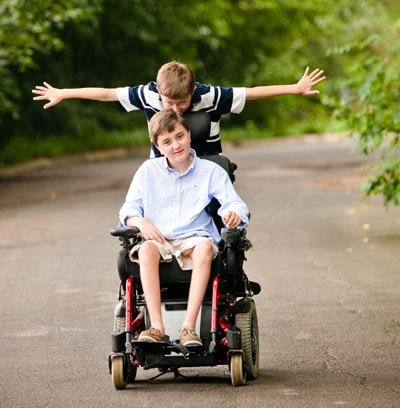 Andrew, 14, who has A-T disease with his brother, Brendan, 12, who did not inherit the rare childhood neurodegenerative disorder. Image credited to A-T Children's Project and adapted from the Rutgers press release.
Home
Featured

Scientists at Rutgers University studying the cause of a rare childhood disease that leaves children unable to walk by adolescence say new findings may provide clues to understanding more common neurodegenerative diseases like Alzheimer’s and Parkinson’s and developing better tools to treat them.

In today’s online edition of Nature Neuroscience, professors Karl Herrup, Ronald Hart and Jiali Li in the Department of Cell Biology and Neuroscience, and Alexander Kusnecov, associate professor in behavioral and systems neuroscience in the Department of Psychology, provide new information about A-T disease, a rare genetic childhood disorder that occurs in an estimated 1 in 40,000 births.

Children born with A-T disease have mutations in both of their copies of the ATM gene and cannot make normal ATM protein. This leads to problems in movement, coordination, equilibrium and muscle control as well as a number of other deficiencies outside the nervous system.

Using mouse and human brain tissue studies, Rutgers researchers found that without ATM, the levels of a regulatory protein known as EZH2 go up. Looking through the characteristics of A-T disease in cells in tissue culture and in brain samples from both humans and mice with ATM mutation, they found that the increase in EZH2 was a major contributing factor to the neuromuscular problems caused by A-T.

“We hope that this work will lead to new therapies to prevent symptoms in those with A-T disease,” says Hart. “But on a larger level, this research provides a strong clue toward understanding more common neurodegenerative disorders that may use similar pathways. “It is a theme that has not yet been examined.”

While the EZH2 protein has been shown to help determine whether genes get turned on or off, altering the body’s ability to perform biological functions, necessary for maintaining good health, the Rutgers study is the first time this protein – which can cause adverse health effects if there is too much of it – has been looked at in the mature nerve cells of the brain.

In the study, mutant mice that had A-T disease and increased levels of EZH2 were “cured” when this excess EZH2 protein was reduced. The treated mice were able to stay on a rotating rod without falling off almost as long as the mice that did not have A-T disease. By contrast, untreated A-T animals lost their balance and fell off the device almost immediately. The mice were also studied in an open area setting. While the treated A-T mice and normal mice explored a wide area of the open field, the A-T mice, with their excess EZH2 protein, were not as adventurous and stayed behind.

Rutgers scientists say the implications of these findings now need to be validated in a clinical setting. They have begun working with the A-T Clinical Center at Johns Hopkins University, collecting blood samples from children with the disease as well as their parents who carry the genes in order to reprogram them into stem cells. This will allow scientists to create human neurons like those in A-T patients and study the mechanisms that lead from ATM mutations to nerve cell disease in more detail.

The hope is that this new information can be used to develop therapeutic drugs that may result in better neuromuscular control and coordination for those with A-T disease. In addition, the scientists will work to determine whether the EZH2 protein plays a role in other more common neurodegenerative diseases, like Parkinson’s and Alzheimer’s and could offer a target for developing drugs to treat those brain disorders.

“What is interesting about human health and this research in particular is that it illustrates how a disease that is thought of as 100 percent genetic, actually has a component that is sensitive to the environment,” says Herrup, lead author of the study.

Notes about this neurology and neurodegeneration research