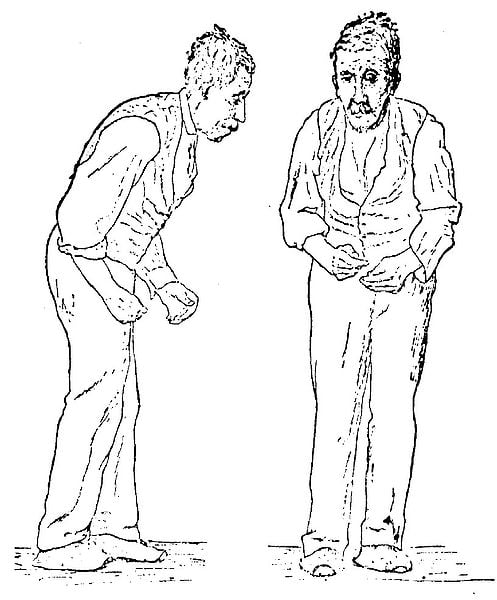 Researchers found Parkinson's patients who do not carry the GBA genetic mutation have higher levels of lipids in their blood. Also, those who had Parkinson's and higher blood lipid levels were more likely to have cognitive impairment and dementia. This is a sketch of a Parkinson's patient.
Home
Featured

The results of a new study by neurological researchers at Rush University Medical Center show that a sudden decrease of testosterone, the male sex hormone, may cause Parkinson’s like symptoms in male mice. The findings were recently published in the Journal of Biological Chemistry.

One of the major roadblocks for discovering drugs against Parkinson’s disease is the unavailability of a reliable animal model for this disease.

“While scientists use different toxins and a number of complex genetic approaches to model Parkinson’s disease in mice, we have found that the sudden drop in the levels of testosterone following castration is sufficient to cause persistent Parkinson’s like pathology and symptoms in male mice,” said Dr. Kalipada Pahan, lead author of the study and the Floyd A. Davis endowed professor of neurology at Rush. “We found that the supplementation of testosterone in the form of 5-alpha dihydrotestosterone (DHT) pellets reverses Parkinson’s pathology in male mice.”

“In men, testosterone levels are intimately coupled to many disease processes,” said Pahan. Typically, in healthy males, testosterone level is the maximum in the mid-30s, which then drop about one percent each year. However, testosterone levels may dip drastically due to stress or sudden turn of other life events, which may make somebody more vulnerable to Parkinson’s disease.

“Therefore, preservation of testosterone in males may be an important step to become resistant to Parkinson’s disease,” said Pahan.

Understanding how the disease works is important to developing effective drugs that protect the brain and stop the progression of Parkinson’s disease. Nitric oxide is an important molecule for our brain and the body.

“However, when nitric oxide is produced within the brain in excess by a protein called inducible nitric oxide synthase, neurons start dying,” said Pahan.

“This study has become more fascinating than we thought,” said Pahan. “After castration, levels of inducible nitric oxide synthase (iNOS) and nitric oxide go up in the brain dramatically. Interestingly, castration does not cause Parkinson’s like symptoms in male mice deficient in iNOS gene, indicating that loss of testosterone causes symptoms via increased nitric oxide production.”

“Further research must be conducted to see how we could potentially target testosterone levels in human males in order to find a viable treatment,” said Pahan.

This research was supported by a grant from the National Institutes of Health that received the highest score for its scientific merit in the particular cycle it was reviewed.

Parkinson’s is a slowly progressive disease that affects a small area of cells within the mid-brain known as the substantia nigra. Gradual degeneration of these cells causes a reduction in a vital chemical neurotransmitter, dopamine. The decrease in dopamine results in one or more of the classic signs of Parkinson’s disease that includes resting tremor on one side of the body; generalized slowness of movement; stiffness of limbs and gait or balance problems. The cause of the disease is unknown. Both environmental and genetic causes of the disease have been postulated.

Parkinson’s disease affects about 1.2 million patients in the United States and Canada. Although 15 percent of patients are diagnosed before age 50, it is generally considered a disease that targets older adults, affecting one of every 100 persons over the age of 60. This disease appears to be slightly more common in men than women.

Notes about this neurology and Parkinson’s disease research