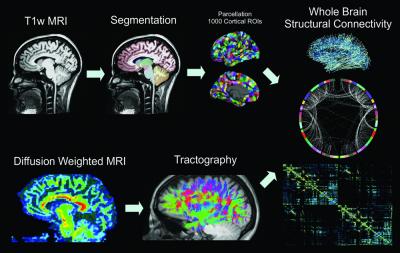 MP-RAGE volumes are segmented into 83 ROIs, which are further parcellated into 1000 cortical and 15 subcortical ROIs. Whole-brain white matter tractography is performed after voxelwise tensor calculation, and the density of fibers that connect each pair of cortical ROIs is used to calculate structural connectivity. T1w = T1-weighted. Credited to Radiology/RSNA.
Home
Featured

Patients with the most common form of focal epilepsy have widespread, abnormal connections in their brains that could provide clues toward diagnosis and treatment, according to a new study published online in the journal Radiology.

Temporal lobe epilepsy is characterized by seizures emanating from the temporal lobes, which sit on each side of the brain just above the ear. Previously, experts believed that the condition was related to isolated injuries of structures within the temporal lobe, like the hippocampus. But recent research has implicated the default mode network (DMN), the set of brain regions activated during task-free introspection and deactivated during goal-directed behavior. The DMN consists of several hubs that are more active during the resting state.

To learn more, researchers performed diffusion tensor imaging, a type of MRI that tracks the movement, or diffusion, of water in the brain’s white matter, the nerve fibers that transmit signals throughout the brain. The study group consisted of 24 patients with left temporal lobe epilepsy who were slated for surgery to remove the site from where their seizures emanated. The researchers compared them with 24 healthy controls using an MRI protocol dedicated to finding white matter tracts with diffusion imaging at high resolution. The data was analyzed with a new technique that identifies and quantifies structural connections in the brain.

Patients with left temporal lobe epilepsy exhibited a decrease in long-range connectivity of 22 percent to 45 percent among areas of the DMN when compared with the healthy controls.

“Using diffusion MRI, we found alterations in the structural connectivity beyond the medial temporal lobe, especially in the default mode network,” said Steven M. Stufflebeam, M.D., from the Athinoula A. Martinos Center for Biomedical Imaging at Massachusetts General Hospital in Boston.

“The increase in local connections could represent a maladaptive mechanism by which overall neural connectivity is maintained despite the loss of connections through important hub areas,” Dr. Stufflebeam said.

The results are supported by prior functional MRI studies that have shown decreased functional connectivity in DMN areas in temporal lobe epilepsy. Researchers are not certain if the structural changes cause the functional changes, or vice versa.

“It’s probably a breakdown of myelin, which is the insulation of neurons, causing a slowdown in the propagation of information, but we don’t know for sure,” Dr. Stufflebeam said.

Dr. Stufflebeam and colleagues plan to continue their research, using structural and functional MRI with electroencephalography and magnetoencephalography to track diffusion changes and look at real-time brain activity.

“Our long-term goal is to see if we can we predict from diffusion studies who will respond to surgery and who will not,” he said.

The study is part of the Human Connectome Project, a five-year project funded by the National Institutes of Health that uses neuroimaging techniques to study connectomics, or the functional and structural connections in the brain. Dr. Stufflebeam’s colleague, Matthew N. DeSalvo, M.D., initiated the study as a medical student with the help of a 2013 Research Medical Student Grant from the Radiological Society of North America (RSNA).