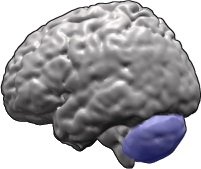 Researchers discovered a new layer of complexity in the process of gene expression as they studied the neurodegenerative disease spinocerebellar ataxia type-6 (SCA6). In SCA, atrophy of the cerebellum occurs, resulting in degeneration of muscle coordination. This image shows the cerebellum, the area of the brain affected by SCA.
Home
Featured

Study results could lead to a therapy for at least one neurological disease.

In a study that could change the way scientists view the process of protein production in humans, University of Chicago researchers have found a single gene that encodes two separate proteins from the same sequence of messenger RNA.

Published online July 3 in Cell, their finding elucidates a previously unknown mechanism in human gene expression and opens the door for new therapeutic strategies against a thus-far untreatable neurological disease.

“This is the first example of a mechanism in a higher organism in which one gene creates two proteins from the same mRNA transcript, simultaneously,” said Christopher Gomez, MD, PHD, professor and chairman of the Department of Neurology at the University of Chicago, who led the study. “It represents a paradigm shift in our understanding of how genes ultimately encode proteins.”

The human genome contains a similar number of protein-coding genes as the nematode worm (roughly 20,000). This disparity between biological complexity and gene count partially can be explained by the fact that individual genes can encode multiple protein variants via the production of different sequences of messenger RNA (mRNA)—short, mass-produced copies of genetic code that guide the creation of myriad cellular machinery.

Gomez and his team, which included first author Xiaofei Du, MD, discovered a new layer of complexity in this process of gene expression as they studied spinocerebellar ataxia type-6 (SCA6), a neurodegenerative disease that causes patients to slowly lose coordination of their muscles and eventually their ability to speak and stand. Human genetic studies identified its cause as a mutation in CACNA1A—a gene that encodes a calcium channel protein important for nerve cell function—resulting in extra copies of the amino acid glutamine.

However, although the gene, mutation and dysfunction are known, attempts to find the biological mechanism of the disease proved inconclusive. Calcium channel proteins with the mutation still seemed to function normally.

Suspecting another factor at play, Gomez and his team instead focused on α1ACT, a poorly understood, free-floating fragment of the CACNA1A calcium channel protein known to express extra copies of glutamine in SCA6 cells. The researchers first looked at its origin and found that, to their surprise, α1ACT was generated from the same mRNA sequence as the CACNA1A calcium channel.

For the first time, they had evidence of a human gene that coded one strand of mRNA that coded two separate, structurally distinct proteins. This occurred due to the presence of a special sequence in the mRNA known as an internal ribosomal entry site (IRES). Normally found at the beginning of an mRNA sequence, this IRES site sat in the middle, creating a second location for ribosomes, the cellular machines that read mRNA, to begin the process of protein production.

Looking at function, Gomez and his team found that normal α1ACT acted as a transcription factor and enhanced the growth of specific brain cells. Importantly, mutated α1ACT appeared to be toxic to nerve cells in a petri dish, and caused SCA6-like symptoms in an animal model.

The team hopes to discover other examples of human genes with similar IRES sites to better understand the implications of this new class of “bifunctional” genes on our basic biology. For now, they are focused on leveraging their findings toward helping SCA6 patients and already are working on ways to silence mutated α1ACT.

“We discovered this genetic phenomenon in the pursuit of a disease cause and, in finding it, immediately have a potential strategy for developing preclinical tools to treat that disease,” Gomez said. “If we can target the IRES and inhibit production of this mutant form of α1ACT in SCA6, we may be able to stop the progression of the disease.”

This work was supported by the National Ataxia Foundation, the National Organization of Rare Diseases and the National Institute of Neurological Disorders and Stroke.