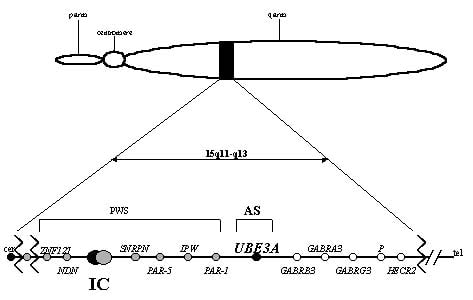 Researchers with the UC Davis MIND Institute and Agilent Laboratories have found that Prader-Willi syndrome — a genetic disorder best known for causing an insatiable appetite that can lead to morbid obesity — is associated with the loss of non-coding RNAs, resulting in the dysregulation of circadian and metabolic genes, accelerated energy expenditure and metabolic differences during sleep.

The research was led by Janine LaSalle, a professor in the UC Davis Department of Medical Microbiology and Immunology who is affiliated with the MIND Institute. It is published online in Human Molecular Genetics.

“Prader-Willi syndrome children do not sleep as well at night and have daytime sleepiness,” LaSalle said. “Parents have to lock up their pantries because the kids are rummaging for food in the middle of the night, even breaking into their neighbors’ houses to eat.”

The study found that these behaviors are rooted in the loss of a long non-coding RNA that functions to balance energy expenditure in the brain during sleep. The finding could have a profound effect on how clinicians treat children with Prader-Willi, as well as point the way to new, innovative therapies, LaSalle said.

The leading cause of morbid obesity among children in the United States, Prader-Willi involves a complex, and sometimes contradictory, array of symptoms. Shortly after birth children with Prader-Willi experience failure to thrive. Yet after they begin to feed themselves, they have difficulty sleeping and insatiable appetites that lead to obesity if their diets are not carefully monitored.

The current study was conducted in a mouse model of Prader-Willi syndrome. It found that mice engineered with the loss of a long non-coding RNA showed altered energy use and metabolic differences during sleep.

Prader-Willi has been traced to a specific region on chromosome 15 (SNORD116), which produces RNAs that regulate gene expression, rather than coding for proteins. When functioning normally, SNORD116 produces small nucleolar (sno) RNAs and a long non-coding RNA (116HG), as well as a third non-coding RNA implicated in a related disorder, Angelman syndrome. The 116HG long non-coding RNA forms a cloud inside neuronal nuclei that associates with proteins and genes regulating diurnal metabolism in the brain, LaSalle said.

“We thought the cloud would be activating transcription, but in fact it was doing the opposite,” she said. “Most of the genes were dampened by the cloud. This long non-coding RNA was acting as a decoy, pulling the active transcription factors away from genes and keeping them from being expressed.”

As a result, losing snoRNAs and 116HG causes a chain reaction, eliminating the RNA cloud and allowing circadian and metabolic genes to get turned on during sleep periods, when they should be dampened down. This underlies a complex cycle in which the RNA cloud grew during sleep periods (daytime for nocturnal mice), turning down genes associated with energy use, and receded during waking periods, allowing these genes to be expressed. Mice without the 116HG gene lacked the benefit of this neuronal cloud, causing greater energy expenditure during sleep.

The researchers said that the work provides a clearer picture of why children with Prader-Willi syndrome can’t sleep or feel satiated and may change therapeutic approaches. For example, many such children have been treated with growth hormone because of short stature, but this actually may boost other aspects of the disease.

Despite Flexibility, Gig Work and Insecure Income Prove Harmful to US Workers

“People had thought the kids weren’t sleeping at night because of the sleep apnea caused by obesity,” said LaSalle. “What this study shows is that the diurnal metabolism is central to the disorder, and that the obesity may be as a result of that. If you can work with that, you could improve therapies, for example figuring out the best times to administer medications.”

Notes about this neurogenetics and Prader-Willi syndrome research

The work was funded by National Institutes of Health grants F31NS073164 and 1R01NS076263 and the Prader-Willi Foundation.