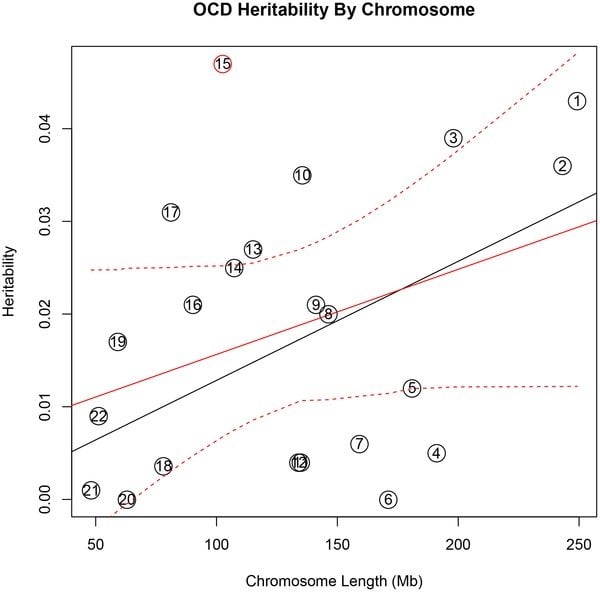 An international research consortium led by investigators at Massachusetts General Hospital (MGH) and the University of Chicago has answered several questions about the genetic background of obsessive-compulsive disorder (OCD) and Tourette syndrome (TS), providing the first direct confirmation that both are highly heritable and also revealing major differences between the underlying genetic makeup of the disorders. Their report is being published in the October issue of the open-access journal PLOS Genetics.

“Both TS and OCD appear to have a genetic architecture of many different genes – perhaps hundreds in each person – acting in concert to cause disease,” says Jeremiah Scharf, MD, PhD, of the Psychiatric and Neurodevelopmental Genetics Unit in the MGH Departments of Psychiatry and Neurology, senior corresponding author of the report. “By directly comparing and contrasting both disorders, we found that OCD heritability appears to be concentrated in particular chromosomes – particularly chromosome 15 – while TS heritability is spread across many different chromosomes.”

An anxiety disorder characterized by obsessions and compulsions that disrupt the lives of patients, OCD is the fourth most common psychiatric illness. TS is a chronic disorder characterized by motor and vocal tics that usually begins in childhood and is often accompanied by conditions like OCD or attention-deficit hyperactivity disorder. Both conditions have been considered to be heritable, since they are known to often recur in close relatives of affected individuals, but identifying specific genes that confer risk has been challenging.

Two reports published last year in the journal Molecular Psychiatry, with leadership from Scharf and several co-authors of the current study, described genome-wide association studies (GWAS) of thousands of affected individuals and controls. While those studies identified several gene variants that appeared to increase the risk of each disorder, none of the associations were strong enough to meet the strict standards of genome-wide significance. Since the GWAS approach is designed to identify relatively common gene variants and it has been proposed that OCD and TS might be influenced by a number of rare variants, the research team adopted a different method. Called genome-wide complex trait analysis (GCTA), the approach allows simultaneous comparision of genetic variation across the entire genome, rather than the GWAS method of testing sites one at a time, as well as estimating the proportion of disease heritability caused by rare and common variants.

“Trying to find a single causative gene for diseases with a complex genetic background is like looking for the proverbial needle in a haystack,” says Lea Davis, PhD, of the section of Genetic Medicine at the University of Chicago, co-corresponding author of the PLOS Genetics report. “With this approach, we aren’t looking for individual genes. By examining the properties of all genes that could contribute to TS or OCD at once, we’re actually testing the whole haystack and asking where we’re more likely to find the needles.”

Using GCTA, the researchers analyzed the same genetic datasets screened in the Molecular Psychiatry reports – almost 1,500 individuals affected with OCD compared with more than 5,500 controls, and nearly TS 1,500 patients compared with more than 5,200 controls. To minimize variations that might result from slight difference in experimental techniques, all genotyping was done by collaborators at the Broad Institute of Harvard and MIT, who generated the data at the same time using the same equipment. Davis was able to analyze the resulting data on a chromosome-by-chromosome basis, along with the frequency of the identified variants and the function of variants associated with each condition.

The results found that the degree of heritability for both disorders captured by GWAS variants is actually quite close to what previously was predicted based on studies of families impacted by the disorders. “This is a crucial point for genetic researchers, as there has been a lot of controversy in human genetics about what is called ‘missing heritability’,” explains Scharf. “For many diseases, definitive genome-wide significant variants account for only a minute fraction of overall heritability, raising questions about the validity of the approach. Our findings demonstrate that the vast majority of genetic susceptibility to TS and OCD can be discovered using GWAS methods. In fact, the degree of heritability captured by GWAS variants is higher for TS and OCD than for any other complex trait studied to date.”

Nancy Cox, PhD, section chief of Genetic Medicine at the University of Chicago and co-senior author of the PLOS Genetics report, adds, “Despite the fact that we confirm there is shared genetic liability between these two disorders, we also show there are notable differences in the types of genetic variants that contribute to risk. TS appears to derive about 20 percent of genetic susceptibility from rare variants, while OCD appears to derive all of its susceptibility from variants that are quite common, which is something that has not been seen before.”

In terms of the potential impact of the risk-associated variants, about half the risk for both disorders appears to be accounted for by variants already known to influence the expression of genes in the brain. Further investigation of those findings could lead to identification of the affected genes and how the expression changes contribute to the development of TS and OCD. Additional studies in even larger patient populations, some of which are in the planning stages, could identify the biologic pathways disrupted in the disorder, potentially leading to new therapeutic approaches.

Notes about this neurogenetics and psychology research

The study is a collaboration between two consortia – the Tourette Syndrome Association International Consortium for Genomics (TSAICG) and the International OCD Foundation Genetics Collaborative (IOCDFGC) – representing 43 institutions across 12 countries. Scharf, an assistant professor of Neurology at Harvard Medical School, is co-chair of the TSAICG steering committee and a member of the IOCDFGC steering committee. Cox is a professor of Medicine and Human Genetics, and Davis a research assistant professor at the University of Chicago. Additional co-authors include Carol Mathews, MD, University of California at San Francisco; James Knowles, MD, University of Southern California, and Evelyn Stewart, MD, University of British Columbia.

Support for the study includes National Institutes of Health grants U01 NS40024, R01 MH101820, and K23 MH085057; and grants from the Tourette Syndrome Association and the David Judah Fund.