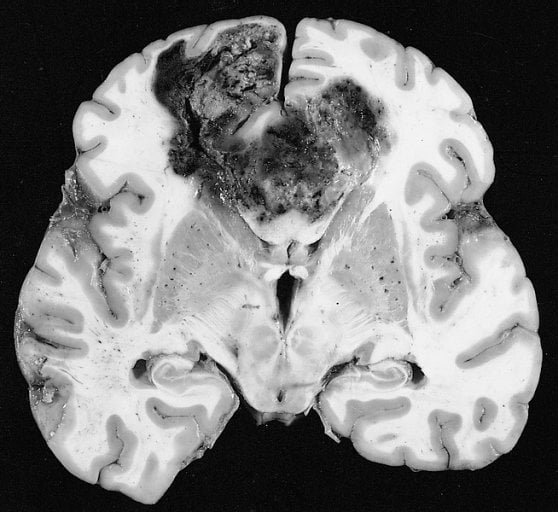 Shown is brain with a glioblastoma multiforme. The image is courtesy of Dr. Rodney D. McComb, Omaha, NE and credited to The Armed Forces Institute of Pathology (AFIP).
Home
Brain Cancer

A study led by researchers at The Ohio State University Comprehensive Cancer Center – Arthur G. James Cancer Hospital and Richard J. Solove Research Institute (OSUCCC – James) has identified an abnormal metabolic pathway that drives cancer-cell growth in a particular glioblastoma subtype. The finding might lead to new therapies for a subset of patients with glioblastoma, the most common and lethal form of brain cancer.

The findings, published recently in the Proceedings of the National Academy of Sciences, show that high levels of the enzyme drive tumor growth.

“Our study suggests that ALDH1A3 is a potentially functional biomarker for mesenchymal glioma stem cells, and that inhibiting that enzyme might offer a promising therapeutic approach for high-grade gliomas that have a mesenchymal signature,” says principal investigator Ichiro Nakano, MD, PhD, associate professor of neurosurgery at the OSUCCC – James. “This indicates that therapies for high-grade gliomas should be personalized, that is, based on the tumor subtype instead of applying one treatment to all patients,” he says.

The National Cancer Institute estimates that 23,130 Americans will be diagnosed with brain and other nervous system tumors in 2013, and that 14,000 people will die of these malignancies. Glioblastoma accounts for about 15 percent of all brain tumors, is resistant to current therapies and has a survival as short as 15 months after diagnosis.

Little is known, however, about the metabolic pathways that drive the growth of individual glioblastoma subtypes – knowledge that is crucial for developing novel and effective targeted therapies that might improve treatment for these lethal tumors.

For this study, Nakano and his collaborators used cancer cells from 40 patients with high-grade gliomas, focusing on tumor cells with a stem-cell signature. The researchers then used microarray analysis and pre-clinical animal assays to identify two predominant glioblastoma subtypes, proneural and mesenchymal.

“Overall, our data suggest that a novel signaling mechanism underlies the transformation of proneural glioma stem cells to mesenchymal-like cells and their maintenance as stem-like cells,” Nakano says. Currently, their discoveries are in provision patent application, led by the Technology Licensing Office at University of Pittsburgh.

The Relationship Between Psychedelics and Consciousness

Notes about this stem cell and brain cancer research