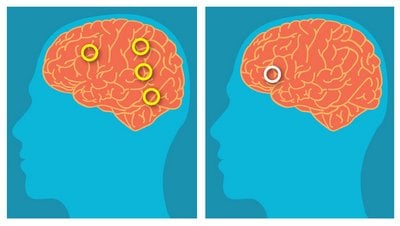 Researchers used ALSPAC data to unravel the genetic components of reading and verbal language. As a result, they identified genetic variants which can predispose children to dyslexia and language impairments. The image shows the differences in brain activity between normal reading and dyslexic children performing rhyming tasks and is not connected to this research. It is used for illustrative purposes only.
Home
Featured

A new study of the genetic origins of dyslexia and other learning disabilities could allow for earlier diagnoses and more successful interventions, according to researchers at Yale School of Medicine. Many students now are not diagnosed until high school, at which point treatments are less effective.

The study is published online and in the July print issue of the American Journal of Human Genetics. Senior author Jeffrey R. Gruen, M.D., professor of pediatrics, genetics, and investigative medicine at Yale, and colleagues analyzed data from more than 10,000 children born in 1991-1992 who were part of the Avon Longitudinal Study of Parents and Children (ALSPAC) conducted by investigators at the University of Bristol in the United Kingdom.

Gruen and his team used the ALSPAC data to unravel the genetic components of reading and verbal language. In the process, they identified genetic variants that can predispose children to dyslexia and language impairment, increasing the likelihood of earlier diagnosis and more effective interventions.

Dyslexia and language impairment are common learning disabilities that make reading and verbal language skills difficult. Both disorders have a substantial genetic component, but despite years of study, determining the root cause had been difficult.

Gruen said these variants interact with a second dyslexia risk gene called KIAA0319. “When you have risk variants in both READ1 and KIAA0319, it can have a multiplier effect on measures of reading, language, and IQ,” he said. “People who have these variants have a substantially increased likelihood of developing dyslexia or language impairment.”

“These findings are helping us to identify the pathways for fluent reading, the components of those pathways; and how they interact,” said Gruen. “We now hope to be able to offer a pre-symptomatic diagnostic panel, so we can identify children at risk before they get into trouble at school. Almost three-quarters of these children will be reading at grade level if they get early intervention, and we know that intervention can have a positive lasting effect.”

Notes about this neurogenetics and dyslexia research