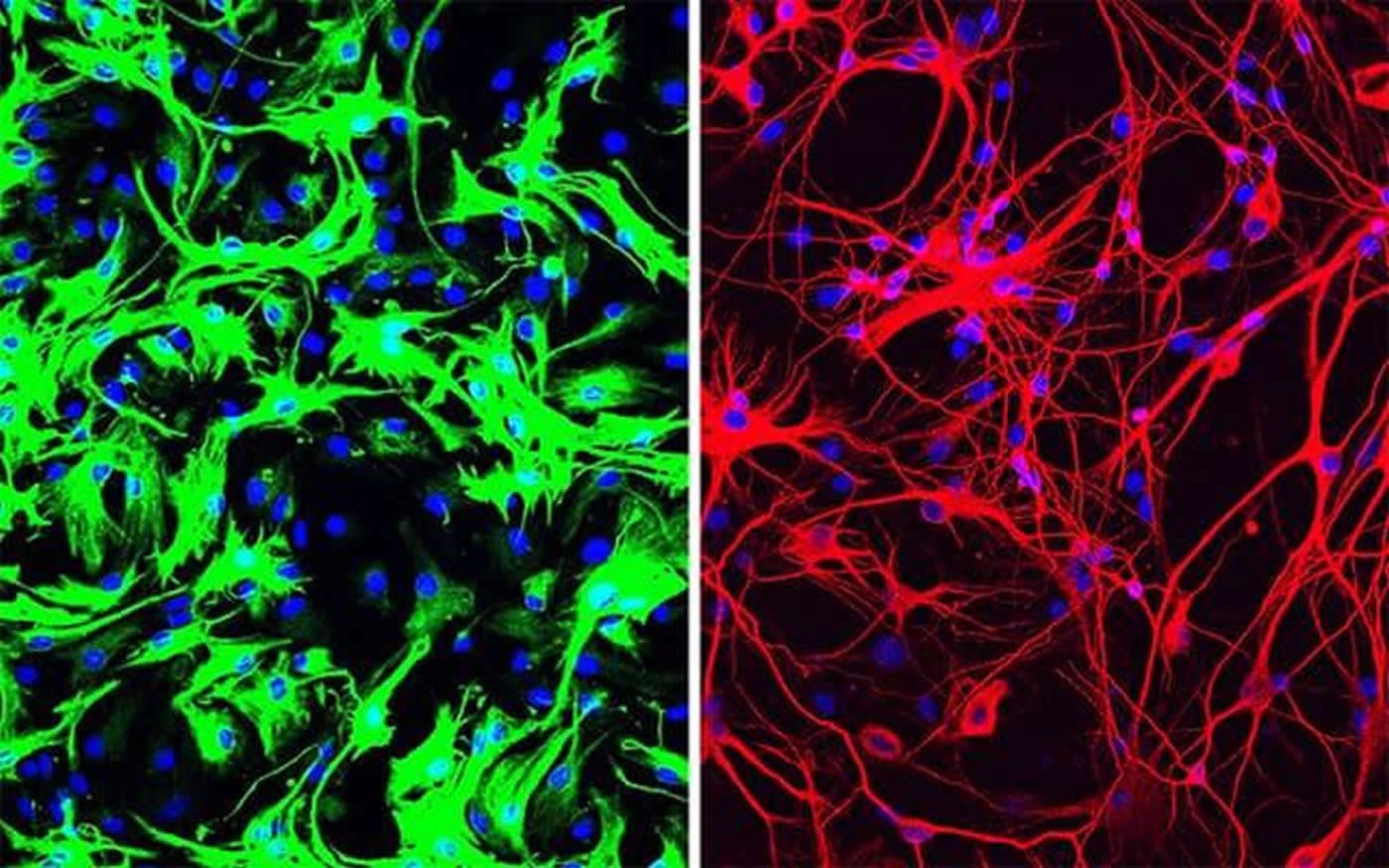 Summary: Researchers administered PTB antisense oligonucleotide treatment directly to the midbrain of mice. In the mouse models exposed to the treatment, a small subset of astrocytes converted to neurons, increasing the number of neurons by 30%. Three months after treatment, mice were completely free of Parkinson’s disease symptoms and remained in remission for the rest of their lives.

Xiang-Dong Fu, PhD, has never been more excited about something in his entire career. He has long studied the basic biology of RNA, a genetic cousin of DNA, and the proteins that bind it. But a single discovery has launched Fu into a completely new field: neuroscience.

For decades, Fu and his team at University of California San Diego School of Medicine studied a protein called PTB, which is well known for binding RNA and influencing which genes are turned “on” or “off” in a cell. To study the role of a protein like PTB, scientists often manipulate cells to reduce the amount of that protein, and then watch to see what happens.

Several years ago, a postdoctoral researcher working in Fu’s lab was taking that approach, using a technique called siRNA to silence the PTB gene in connective tissue cells known as fibroblasts. But it’s a tedious process that needs to be performed over and over. He got tired of it and convinced Fu they should use a different technique to create a stable cell line that’s permanently lacking PTB. At first, the postdoc complained about that too, because it made the cells grow so slowly.

But then he noticed something odd after a couple of weeks — there were very few fibroblasts left. Almost the whole dish was instead filled with neurons.

In this serendipitous way, the team discovered that inhibiting or deleting just a single gene, the gene that encodes PTB, transforms several types of mouse cells directly into neurons.

More recently, Fu and Hao Qian, PhD, another postdoctoral researcher in his lab, took the finding a big step forward, applying it in what could one day be a new therapeutic approach for Parkinson’s disease and other neurodegenerative diseases. Just a single treatment to inhibit PTB in mice converted native astrocytes, star-shaped support cells of the brain, into neurons that produce the neurotransmitter dopamine. As a result, the mice’s Parkinson’s disease symptoms disappeared.

“Researchers around the world have tried many ways to generate neurons in the lab, using stem cells and other means, so we can study them better, as well as to use them to replace lost neurons in neurodegenerative diseases,” said Fu, who is a Distinguished Professor in the Department of Cellular and Molecular Medicine at UC San Diego School of Medicine. “The fact that we could produce so many neurons in such a relatively easy way came as a big surprise.”

There are several different ways to mimic Parkinson’s disease in mice. In this case, the researchers applied a dopamine look-a-like molecule to poison neurons that produce dopamine. As a result, the mice lose dopamine-producing neurons and develop symptoms similar to Parkinson’s disease, such as movement deficiencies.

The treatment works like this: The researchers developed a noninfectious virus that carries an antisense oligonucleotide sequence — an artificial piece of DNA designed to specifically bind the RNA coding for PTB, thus degrading it, preventing it from being translated into a functional protein and stimulating neuron development.

Antisense oligonucleotides, also known as designer DNA drugs, are a proven approach for neurodegenerative and neuromuscular diseases — study co-author, Don Cleveland, PhD, pioneered the technology, and it now forms the basis for a Food and Drug Administration (FDA)-approved therapy for spinal muscular atrophy and several other therapies currently in clinical trials. Cleveland is chair of the Department of Cellular and Molecular Medicine at UC San Diego School of Medicine and member of the Ludwig Institute for Cancer Research, San Diego.

The researchers administered the PTB antisense oligonucleotide treatment directly to the mouse’s midbrain, which is responsible for regulating motor control and reward behaviors, and the part of the brain that typically loses dopamine-producing neurons in Parkinson’s disease. A control group of mice received mock treatment with an empty virus or an irrelevant antisense sequence.

In the treated mice, a small subset of astrocytes converted to neurons, increasing the number of neurons by approximately 30 percent. Dopamine levels were restored to a level comparable to that in normal mice. What’s more, the neurons grew and sent their processes into other parts of brain. There was no change in the control mice.

By two different measures of limb movement and response, the treated mice returned to normal within three months after a single treatment, and remained completely free from symptoms of Parkinson’s disease for the rest of their lives. In contrast, the control mice showed no improvement.

“I was stunned at what I saw,” said study co-author William Mobley, MD, PhD, Distinguished Professor of Neurosciences at UC San Diego School of Medicine. “This whole new strategy for treating neurodegeneration gives hope that it may be possible to help even those with advanced disease.”

What is it about PTB that makes this work? “This protein is present in a lot of cells,” Fu said. “But as neurons begin to develop from their precursors, it naturally disappears. What we’ve found is that forcing PTB to go away is the only signal a cell needs to turn on the genes needed to produce a neuron.”

Of course, mice aren’t people, he cautioned. The model the team used doesn’t perfectly recapitulate all essential features of Parkinson’s disease. But the study provides a proof of concept, Fu said.

Next, the team plans to optimize their methods and test the approach in mouse models that mimic Parkinson’s disease through genetic changes. They have also patented the PTB antisense oligonucleotide treatment in order to move forward toward testing in humans.

Living Retina Achieves Sensitivity and Efficiency Engineers Can Only Dream About

“It’s my dream to see this through to clinical trials, to test this approach as a treatment for Parkinson’s disease, but also many other diseases where neurons are lost, such as Alzheimer’s and Huntington’s diseases and stroke,” Fu said. “And dreaming even bigger — what if we could target PTB to correct defects in other parts of the brain, to treat things like inherited brain defects?

“I intend to spend the rest of my career answering these questions.”

Parkinson’s disease is characterized by loss of dopamine neurons in the substantia nigra. Similar to other major neurodegenerative disorders, there are no disease-modifying treatments for Parkinson’s disease. While most treatment strategies aim to prevent neuronal loss or protect vulnerable neuronal circuits, a potential alternative is to replace lost neurons to reconstruct disrupted circuits. Here we report an efficient one-step conversion of isolated mouse and human astrocytes to functional neurons by depleting the RNA-binding protein PTB (also known as PTBP1). Applying this approach to the mouse brain, we demonstrate progressive conversion of astrocytes to new neurons that innervate into and repopulate endogenous neural circuits. Astrocytes from different brain regions are converted to different neuronal subtypes. Using a chemically induced model of Parkinson’s disease in mouse, we show conversion of midbrain astrocytes to dopaminergic neurons, which provide axons to reconstruct the nigrostriatal circuit. Notably, re-innervation of striatum is accompanied by restoration of dopamine levels and rescue of motor deficits. A similar reversal of disease phenotype is also accomplished by converting astrocytes to neurons using antisense oligonucleotides to transiently suppress PTB. These findings identify a potentially powerful and clinically feasible approach to treating neurodegeneration by replacing lost neurons.

Link Between Brain Cell Development and Risk of Schizophrenia Discovered