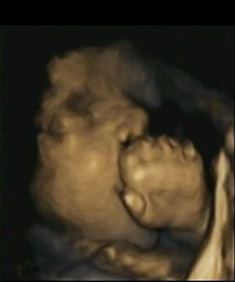 Using the 4D scan, researchers noted by 36 weeks a significantly higher proportion of fetuses were able to open their mouths before touching them. This suggests that later in pregnancy, the fetuses were able to anticipate that their hands were about to touch their mouths, rather than reacting to the touch of their hands. This image is a 4D scan of a fetus at 32 weeks gestation. Credited to Durham University.
Home
Featured

Babies Learn to Anticipate Touch in the Womb

Babies learn how to anticipate touch while in the womb, according to new research.

Using 4-d scans psychologists at Durham and Lancaster universities found, for the first time, that fetuses were able to predict, rather than react to, their own hand movements towards their mouths as they entered the later stages of gestation compared to earlier in a pregnancy.

The Durham-led team of researchers said that the latest findings could improve understanding about babies, especially those born prematurely, their readiness to interact socially and their ability to calm themselves by sucking on their thumb or fingers.

They said the results could also be a potential indicator of how prepared babies are for feeding.

The researchers carried out a total of 60 scans of 15 healthy fetuses at monthly intervals between 24 weeks and 36 weeks gestation.

Fetuses in the earlier stage of gestation more frequently touched the upper part and sides of their heads.

As the fetuses matured they began to increasingly touch the lower, more sensitive, part of their faces including their mouths.

By 36 weeks a significantly higher proportion of fetuses were observed opening their mouths before touching them, suggesting that later in pregnancy they were able to anticipate that their hands were about to touch their mouths, rather than reacting to the touch of their hands, the researchers said.

Increased sensitivity around a fetus’ mouth at this later stage of pregnancy could mean that they have more “awareness” of mouth movement, they added.

Previous theories have suggested that movement in sequence could form the basis for the development of intention in fetuses.

The researchers said their findings could potentially be an indicator of healthy development, as arguably fetuses who are delayed in this development due to illness, such as growth restriction, might not show the same behaviour observed during the study.

The research, published in the journal Developmental Psychobiology, involved eight girls and seven boys and the researchers noticed no difference in behaviour between boys and girls.

Lead author Dr Nadja Reissland, in the Department of Psychology, at Durham University, said: “Increased touching of the lower part of the face and mouth in fetuses could be an indicator of brain development necessary for healthy development, including preparedness for social interaction, self-soothing and feeding.

“What we have observed are sequential events, which show maturation in the development of fetuses, which is the basis for life after birth.

“The findings could provide more information about when babies are ready to engage with their environment, especially if born prematurely.”

Brian Francis, Professor of Social Statistics at Lancaster, added: “This effect is likely to be evolutionally determined, preparing the child for life outside the womb. Building on these findings, future research could lead to more understanding about how the child is prepared prenatally for life, including their ability to engage with their social environment, regulate stimulation and being ready to take a breast or bottle.”

The study builds on previous research by Durham and Lancaster into fetal development. Earlier this year another of their studies showed that unborn babies practise facial expressions in the womb in what is thought to be preparation for communicating after birth.

And in 2012 Dr Reissland published research showing that unborn babies yawn in the womb, suggesting that yawning is a developmental process which could potentially give doctors another index of a fetus’ health.

Notes about this neurodevelopment and psychology research